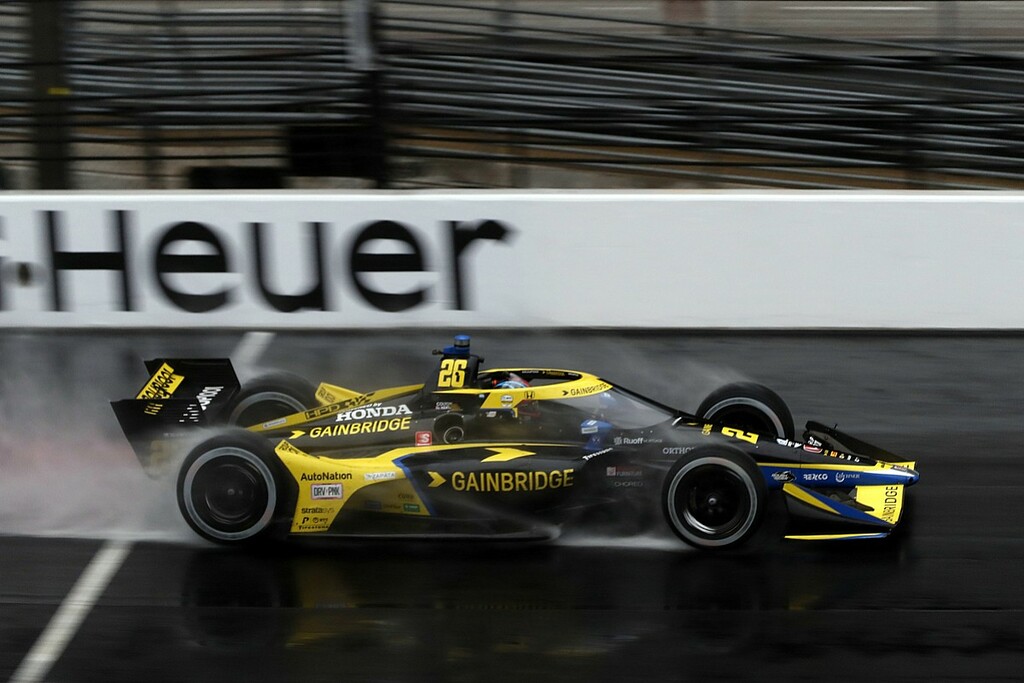 IndyCar GP Indy: Herta splashes to victory in eventful race
Colton Herta scored his first IndyCar win of 2022 from 14th on the grid in a Grand Prix of Indianapolis…

With a wet race declared on the damp track, the drivers looked very tentative on the three warm-up laps, looking out for the puddles and trying to figure out the potential passing zones. Drying lines were emerging on both the front and back straights, the track temp rising to 87degF, but the twists of Turns 7 through 10 still looked treacherous.

The start was very clean, but Will Power got passed on either side by Alex Palou (outside) and Josef Newgarden inside into Turn 7, while Pato O’Ward moved up behind them.

He was ready to pounce on Palou around the outside of the final turn, as Power dived back down the inside of Newgarden to reclaim third, which sent the #2 car onto the grass.

Power then ran wide at the Turn 5 chicane, allowing Felix Rosenqvist up into third, and the Swede zoomed onto Palou’s tail to make it an Arrow McLaren SP-Chevrolet 1-2.

Herta, who started 14th, and Takuma Sato who started 13th, had less to lose than most, pitted for red Firestone alternate tires on Lap 3. O’Ward followed this example next time by, as did Power, Conor Daly and Newgarden of the front runners. Herta’s pace was so strong on slicks that he made huge ground on the leaders, zapped past Power as the polesitter pulled out of the pits, and with a lap’s worth of temperature in his tires, he pulled up onto the tail of O’Ward. He then saved a long full opposite-lock slide through Turn 8 and then passed O’Ward to grab the lead.

Then out came the full course yellow on Lap 8. Kyle Kirkwood spun but got his AJ Foyt-Chevy going again, but Alex Palou lost it out of Turn 4 and spun across the grass. He kept the engine going and rejoined the track but it stalled as he tried to get going again and required rescuing. He was restarted by the AMR Safety Team and headed to the pits, and then resumed, albeit now a lap down.

At the restart on Lap 11, Herta got the jump chased by the two McLarens, Power, Daly and Newgarden. Daly held off the two-time champion’s Penske-Chevy until ordered to save fuel, the Ed Carpenter Racing team keen to try and run this race on just three stops, despite the early switch from rain tires to slicks.

However, Newgarden’s race wouldn’t last much longer. Sato went down the inside of him at Turn 9 to claim fifth, and his lost momentum allowed Rossi to draw alongside him on the outside of Turn 10, the pair made contact, lost momentum and allowed Jack Harvey up onto Josef’s tail. The Penske car got squeezed between Rossi and Harvey and spun, eventually grinding to a halt in the runoff at Turn 12.

Under the subsequent caution, Marcus Ericsson, Palou and Kirkwood – who’d suffered a second spin – all pitted.

The restart was clean up front, Herta leading O’Ward, and Rosenqvist, while behind them Sato dived down the inside of Power to claim fourth into Turn 1. All was well until Turn 1 when Rinus VeeKay in the second ECR car – who had been ordered to cede a place to Romain Grosjean for blocking the Frenchman – fell onto the grass exiting Turn 1, and rejoined the track at a skewed angle and vulnerable to the following pack. Rookie Devlin DeFrancesco was the unlucky driver who locked up and struck the errant VeeKay, who limped to the pits. Out came the caution for a third time.

The next restart on Lap 25 was clean all down the field, and this time O’Ward wasn’t going to let Herta go, staying within one second of the Andretti Autosport driver. Rosenqvist was content to ride one second further back, a similar distance ahead of Sato, who had eked out 1.5sec over Power.

Power was having to keep his eye on his mirrors for an aggressive Rossi, but in fact it was Rossi who got passed by Jack Harvey’s Rahal Letterman Lanigan-Honda on Lap 30 into Turn 1. Harvey then passed Power, who also then swiftly lost a place to Rossi.

Herta set his fastest lap of the race before pitting on Lap 32 for fresh reds, and Sato also stopped that lap. The next time by, O’Ward, Rossi and Power were in (these latter two having very slow stops). Rosenqvist and Harvey went a lap further still.

Rosenqvist emerged from the pitlane alongside Herta on track, but Herta had the inside for Lap 2 and claimed the net lead. Rosenqvist had, however, jumped teammate O’Ward. Scott Dixon, who had started 21st, ran out of fuel trying to go another lap and trickled down pitlane, and required a push. At the same time, Dalton Kellett spun his Foyt car across the grass at Turn 6 and needed rescuing. Time for the fourth yellow.

Out front, off-strategy Ericsson and Kirkwood ran first and second, having run 22 and 17 likely waiting for the imminent return of the rain. Behind them ran Dixon a lap down.

Ganassi and Andretti were expecting the rain returning because Rossi, Palou and DeFrancesco all pitted for wet tires. It looked an inspired choice because sure enough the returned during the yellow.

The Lap 42 restart went badly wrong, as O’Ward went up the inside of teammate Rosenqvist and then tried to take Herta under braking. Forced to turn too sharply he spun and knocked his front wing against teammate Rosenqvist. O’Ward got going again unassisted, but Rosenqvist was stalled. Sato went onto the grass to avoid them but then the Dale Coyne Racing with RWR-Honda spun as it hit the asphalt again.

Under this fifth caution, Kirkwood stopped for rain tires, as did Christian Lundgaard, leaving Ericsson out front, somewhat protected from Herta by the lapped Dixon. Behind Herta was McLaughlin, Harvey and Grosjean.

On the Lap 46 restart Dixon unlapped himself and pulled away, while Herta dived up the inside of Ericsson at Turn 4 and the Ganassi car then freefell down the order, while Simon Pagenaud moved his Meyer Shank Racing-Honda past Power.

Herta then put Dixon a lap down again, passing him and pulling away, chased by McLaughlin, Harvey, Grosjean, Pagenaud, Power and the recovering O’Ward.

Into Turn 1, Grosjean tried to pass Harvey for third around the outside of Turn 7 but was run out wide and spun, and Pagenaud passed the pair of them. Power then tried to get Harvey around the outside of Turn 1 but was elbowed sideways by the RLL car and the Penske driver lost a spot to O’Ward. A lap later, the orange AMSP car was past Harvey into fourth. With the rain having failed to materialize in time, the gamble on wets by, Palou, Rossi etc had had to pit for more Firestone reds.

O’Ward passed Pagenaud for third on Lap 55, and the following lap Callum Ilott’s Juncos Hollinger-Chevy passed Power for sixth, just before the sixth caution of the day for Jimmie Johnson spinning and stalling his Carvana Ganassi car.

When the pits opened on Lap 59, the leaders dived into the pits and they all chose slicks despite the rain coming down slightly harder. McLaughlin’s crew got him out ahead of Herta, followed by O’Ward, Pagenaud, Harvey, Power, Ilott and Grosjean.

Then VeeKay spun and stalled his ECR car under caution, and in the elongated yellow period, several of the leaders came back in to change to wets. Those who didn’t included McLaughlin, O’Ward and Grosjean, who now ran 1-2-3, although Grosjean was sent behind Power by Race Control, and McLaughlin spun under caution, and fell to sixth.

O’Ward was leading for the restart, with the AMSP car temporarily protected by the lapped Jimmie Johnson, but Herta was straight past the Ganassi car and outbraked the slick-tired O’Ward into Turn 1. Behind them, McLaughlin spun at Turn 3 and stalled, and Dixon, Tatiana Calderon and Rossi had to drive into the sandtrap in avoidance, although they all regained the track without assistance.

This was now a two-hour timed race, and as the rain continued, O’Ward bravely elected to stay out on slicks, and then spun under caution at Turn 1 with eight minutes to go, down to fourth, allowing Pagenaud and Power onto Herta’s tail. O’Ward then elected to pit on the restart.

Herta, Pagenaud and Power escaped at the restart with seven minutes to go while Daly staved off Juan Pablo Montoya into Turn 1. He couldn’t hold off the charging Ericsson however, who grabbed fourth, while fellow Swede Rosenqvist demoted Montoya to claim sixth. Then JPM struck a wall, out came the yellow and that was effectively the end of the race.

Herta thus scored the seventh win of his career, after leading 50 of the 75 laps run. Pagenaud scored his best result yet for the Meyer Shank Racing team, and Power scored his fifth consecutive top-four finish and took the lead of the championship.

Ericsson held on for fourth ahead of Daly and Rosenqvist, while Sato took seventh ahead of Ilott, who was rammed by Lundgaard as they passed the checkered flag. Dixon completed the top 10.

IndyCar GP Indy: Herta splashes to victory in eventful race
Colton Herta scored his first IndyCar win of 2022 from 14th on the grid in a Grand Prix of Indianapolis…