Dixon had booked his place into the Fast Six by going fastest in the preceding Top 12 session, edging Rinus VeeKay for pace with a 233.510mph run.

Last to take to the track in the final part of qualifying, the six-time IndyCar champion and 2008 Indy 500 winner delivered two laps over 234mph and even his fourth and slowest lap was faster than most drivers’ fastest efforts, and broke a four-way tie for second most Indy poles in history. He now lies only one behind record holder Rick Mears.

The Chip Ganassi Racing driver's effort also leaves him with the second fastest qualifying run of all time at Indy, behind only Arie Luyendyk’s run in 1996 - although that was not set on Pole Day and only earned Luyendyk only 21st on the grid.

Dixon outqualified his teammate and reigning IndyCar champion Alex Palou by 0.5mph, with Rinus VeeKay joining them on the outside of the front row with the fastest Chevrolet-powered car - the #21 Ed Carpenter Racing machine.

Tony Kanaan, one of four Ganassi cars that made it into the Fast Six, was the first to roll and his first lap was 232.996mph but by lap 3 he had to marginally lift in Turn 1, and produced a 232.372mph average.

Carpenter thus begins from the front of the second, setting the fourth-fastest run in the Fast Six session ahead of Ericsson and Kanaan.

Of those unable to progress from the Top 12 session, Pato O'Ward was closest to making it through, the Arrow McLaren SP driver only sixth and on the bubble of graduating to the Fast 6 when yesterday’s pacesetter Rinus VeeKay headed out in the second Chevrolet-powered ECR machinery.

O'Ward was bumped out by the Dutchman's run, however, as VeeKay crossed the line just 0.1mph off of Dixon's Top 12 run.

The Mexican driver was about 0.5mph faster than Arrow McLaren SP team-mate Felix Rosenqvist as Romain Grosjean, Andretti Autosport's only hope, kicked off his run with an excellent 233.270mph, his fastest lap of the week, but lost almost 2.5mph across the four laps to start his first Indy 500 in ninth.

The sole Team Penske representative in the Top 12, 2018 winner Will Power danced up to the Turn 1 wall twice on his run and explained afterwards the balance of the car was not as good as in yesterday’s qualifying session, and he ended up behind Sato.

Ganassi rookie Jimmie Johnson had a huge moment and enacted a great recovery at Turn 1 on his opening lap, but kept his head to deliver a fine 232.9 next time by.

However, the speed dissipated rapidly on laps 3 and 4 and he wound up at the bottom of the speed chart. Nonetheless, he had covered himself in glory by saving the biggest non-crash of the session. 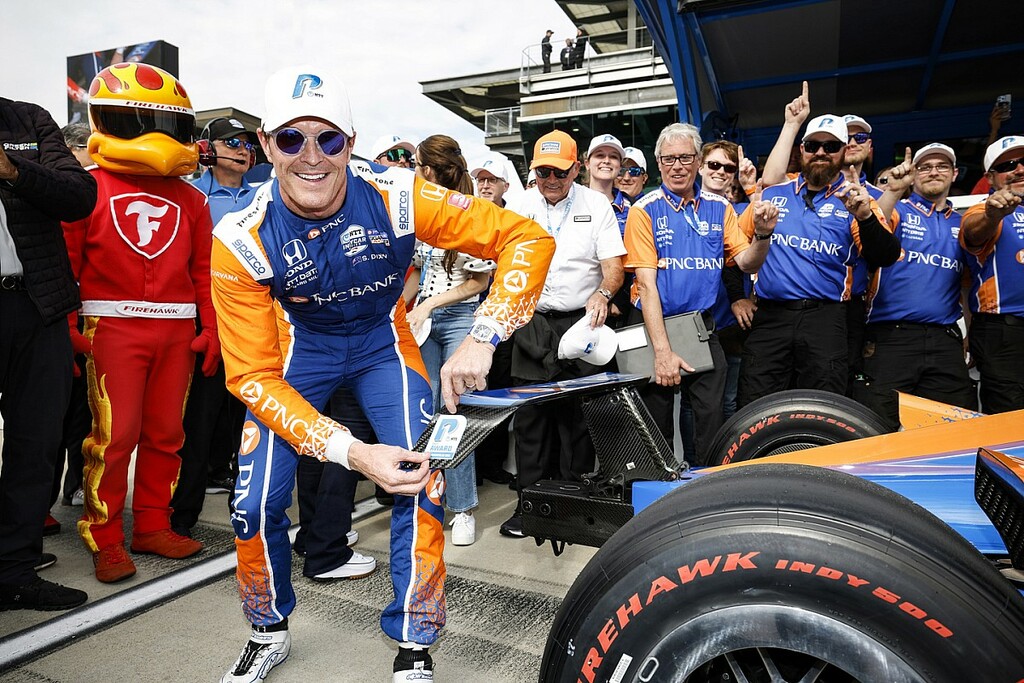 Indy 500: Dixon wins brilliant fifth pole at 234mph average
Scott Dixon has become a five-time pole-winner at the Indianapolis 500, with the second fastest qualifying run ever seen at…

Motorsport
One subscription that gives you access to news from hundreds of sites
Indy 500: Dixon paces Top 12, huge save by Johnson but misses cut

In the new Top 12 session for qualifying at the Indy 500, Scott Dixon edged Rinus VeeKay for pace advanced…