The south-east Asian country has been struggling to cope with the highly contagious Delta variant since it was first discovered in Indonesia in late June. According to Our World in Data, Indonesia’s total number of infections has now reached 3.53 million.

The country recorded a huge rise in cases at the beginning of July, and more than 30,100 deaths. High fatality numbers have left much of the country frustrated with their government, blaming a slow vaccine rollout, while others point blame at conspiracy theorists and anti-vaxxers.

“Living and dying is part of the life cycle,” says Rommy Stefanus, 39, who lives in Jakarta with his family. “But I do believe this [the deaths] can be reduced if our government is more responsive in handling this matter.”

Stefanus, who works in logistics, feels that the Indonesian government was not effective at making early decisions such as sectioning off areas where outbreaks occurred could have slowed the spread of the Delta variant. Instead, he said, it created a climate of distrust between the authorities and the local population.

“​​It’s frustrating, because again, the government is not strict about this [implementing the lockdown] either,” Stefanus said. “They close some roads, put some police in place, but at certain times they just let people pass. In the end, people are trying to outsmart the authorities.” Stefanus also highlighted a concern with conspiracies surrounding the virus. He said many Indonesians do not consider it a serious health concern, and see it as a hoax.

It is a sentiment shared by Arry Susanto, 50, a local film-maker living in South Sumatra.

The people who deny this pandemic situation are to blame,” Susanto said. “Because of them, the death count keeps rising.”

Many medical professionals say hospitals are grappling to treat new patients as the healthcare system becomes increasingly overwhelmed. Hundreds are now dying in their own homes.

“It is very rare that patients come and get into the ICU directly,” Lia Partakusuma, the secretary general of the Indonesia Hospital Association, told the Associated Press.

“Many of them refuse to wait in the emergency unit, maybe they feel uncomfortable, so they decide to go back home,” she said.

The crisis has pushed local volunteers to treat the sick at their homes, putting their own lives at risk. These paramedics have been rushing coronavirus victims from their homes to hospitals when their condition becomes severe.

Indonesia implemented a lockdown on 1 July. Since the increased restrictions began last month, the country has seen pockets of improvement, particularly in Java and Bali where cases have dropped slightly. But the government moved to extend the lockdown for another week as a precaution.

The government has begun ramping up its vaccination programme in order to get ahead of the rising numbers. It has also taken steps to increase oxygen production for medical use and set up field hospitals throughout the country, according to local reports.

But even as safety measures are increased, locals like Susanto feel the rising deaths have led to a collective sense of despair.

“We’re really sad and frustrated with all the news regarding the death count,” he said. “In my neighbourhood in Bandar Lampung, almost every morning we hear the obituary announced from our village mosque.” 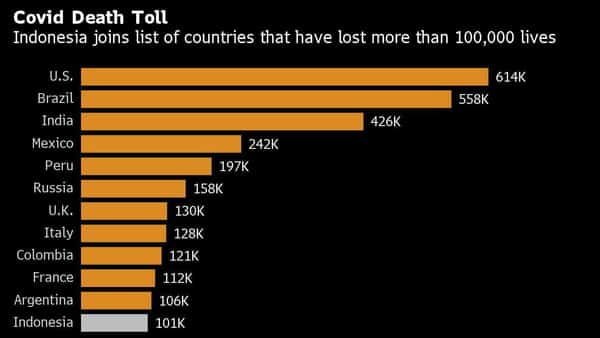 Indonesia becomes second in Asia to hit 100,000 covid deaths
After weeks of topping the world’s tally of daily Covid-19 deaths, Indonesia added 1,747 fatalities today, according to data from…

Livemint
One subscription that gives you access to news from hundreds of sites
Indonesia's Covid-19 death toll surpasses 100,000

By RNZ New Zealand is sending 100,000 vaccine doses and more money to Fiji for nursing staff as the country's…