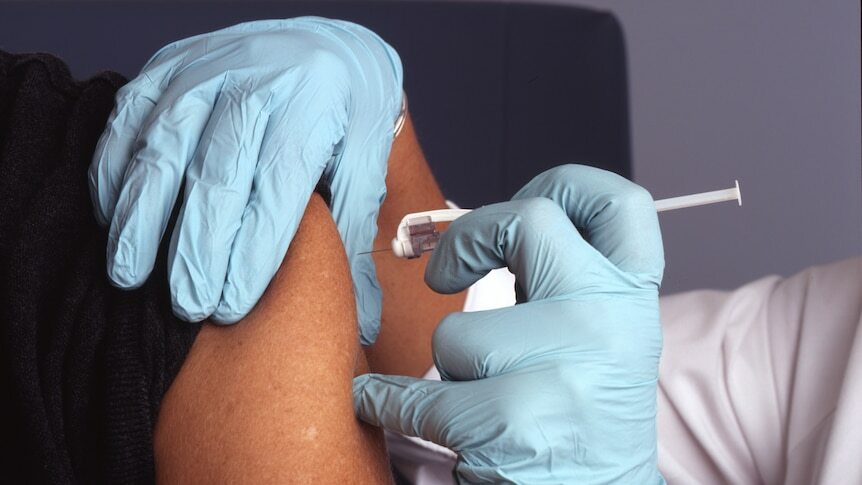 A software problem is being blamed for incorrectly inflating the number of Indigenous Australians thought to have been vaccinated against COVID-19 in Victoria.

The state had been hailed as a success story at a time when Indigenous vaccination rates continue to lag behind the general population elsewhere.

Figures released by the federal government on Sunday suggested 47,954 Aboriginal and Torres Strait Islanders in Victoria had received one vaccine dose, with 30,951 fully vaccinated.

However, those figures were revised down on Monday to 21,559 people having received a first dose, and 12,209 being fully vaccinated.

According to the national COVID-19 vaccine taskforce, led by Lieutenant General John Frewen, it meant the Indigenous vaccination rate in Victoria had dropped from in excess of 60 per cent of people having received a first dose to around 45 per cent.

"Nationally, there has also been a small decrease in the first dose coverage rate for Aboriginal and/or Torres Strait Islander people, from 38.7 per cent to 36.3 per cent [based on data at 8 September 2021]," it said.

The taskforce blamed a software issue that was "incorrectly assigning Indigenous status to patients where the field was left blank".

Victoria's health department insisted the problem was the responsibility of the Commonwealth.

"We're pleased that Aboriginal and Torres Strait Islander vaccinations are progressing at a fast pace in Victoria," a spokesperson said.

"We accept that this data issue was unintentional on the part of the software provider and the Commonwealth."

"It is true that Victoria was being held up as the gold standard in terms of the rollout for vaccinations of First Nations people, but I want to know the details," she said.

Communities being prioritised for vaccine

The vaccination data error was revealed as the federal government announced a plan to try to speed up the rollout in 30 Indigenous communities, which have some of the lowest vaccination rates in the country.

"In some of the bigger communities, we'll be doing things like super clinics, you know, a sort of blitz effort to get large numbers of people through.

"In other areas we'll be doing very close community consultation, with an information campaign to get the community ready to accept vaccination and then we'll provide the vaccinations there.

"But we're increasing allocations to various clinics. We're looking at additional funding. We're getting the [communication] plans worked out."

An extra $7 million will be provided to the National Aboriginal Community Controlled Health Organisation, with some of the funding to be used to hire more staff, who will liase directly with the communities.

There is also funding for First Nations Media Australia, which has been asked to produce new advertising material that can be shared among Aboriginal and Torres Strait Islander peoples about the vaccine rollout, to address vaccine hesitancy.

The 30 communities being prioritised are: