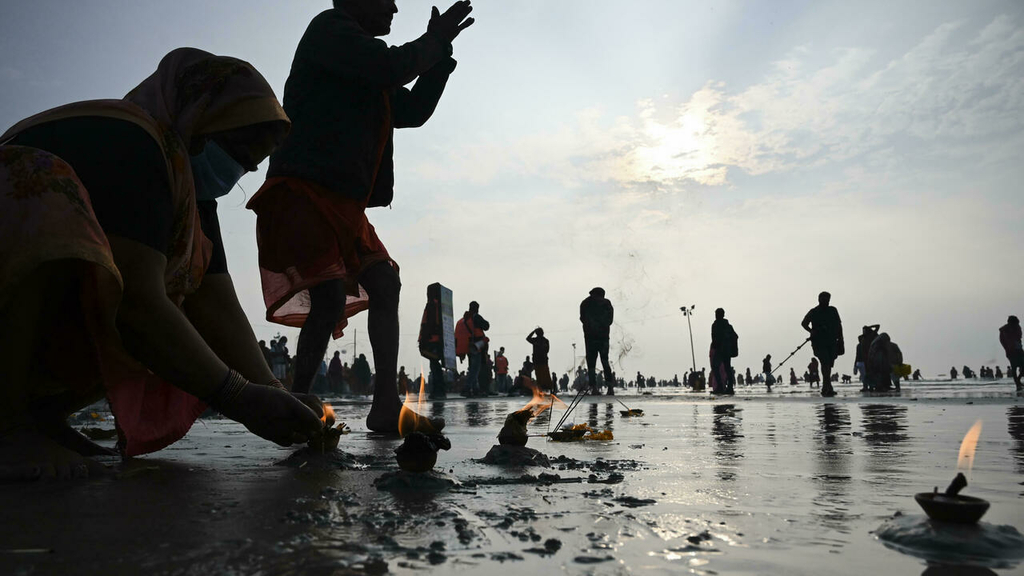 Hundreds of thousands of Hindus are taking their annual dip in India's sacred Ganges River Friday, and over the weekend, despite soaring Covid-19 cases and stern restrictions. A similar event was partly blamed for a savage virus surge last year.

Pilgrims were arriving by the hour for the annual festival called Gangasagar Mela in India’s West Bengal state, which is daily reporting around 20,000 Covid cases including the highly transmissible Omicron variant.

Authorities in capital Kolkata said they expected the numbers to touch up to a million on the banks of the Ganges, which Hindus also believe grant “Moksha” or liberation from the eternal cycle of life and death.

On Thursday, India reported 247,417 new Covid-19 infections, up 27 percent from a day earlier and the biggest single-day jump since May last year, government data showed.

Local courts showed the green flag for the spiritual congregation but set stiff pre-conditions for visitors and set up a watchdog panel to supervise health protocols at the site on a Bengal island.

“It is like wondering how cold it’d be by the side of an inferno,” cardiac surgeon Kunal Sarkar was quoted as saying as devotees arrived at a camping site from elsewhere in India.

TV showed worshippers, vendors and holy men milling around the festival grounds, many without masks but some also visiting vaccination and testing centers for visitors towing entire families for the Friday ritual.

Police were out in strength and volunteers were trying to enforce the sweeping health protocols.

Epidemiologists warned the Bengal festival could turn into a “super spreader” event for omicron reported in 50 of the 53 European and central Asian countries.

The delta wave in India is a case study

West Bengal Chief Minister Mamata Banerjee faced attack from critics for not calling off the festival, which is celebrated across India, Nepal and Bangladesh in different forms.

“Earlier, she built her image as a leader of Muslims and now apart from that she wants to project herself as a Hindu leader,” Chakroborty told RFI.

“That is the only consideration she seems to have,” the political leader said by telephone from capital Kolkata.

“I don’t understand. People of the entire state want something else and the state government is planning something else,” the analyst told RFI.

“Mamata Banerjee is sending a signal she is standing by the side of Hindus ... Perhaps she wants to shed the pro-Muslim image of her party,” he asserted.

But Saugata Rai, Banerjee’s senior-most party colleague argued the annual festivities were also closely linked to tradition and the livelihood of many.

“Gangasagar Mela is a source of income for local residents and it is also deeply rooted in our faith and so we cannot just call it off,” the MP said.

An identical riverbank festival in the northern city of Prayagraj too was drawing hordes of pilgrims for the symbolic dip in the Ganges.

Media reported people were flocking to the Mogul-built city where the 2,510-kilometre Ganges flows into Yamuna, another sacred river.

But the authorities in the nearby pilgrimage town of Hardwar imposed a blanket ban on planned weekend rituals because of the pandemic, officials added.

A bathing event last year in Hardwar and reckless election campaign rallies by Banerjee’s ruling party and its adversaries in West Bengal were blamed for last summer’s lethal surge of the Delta variant.

India has so far reported 36 million infections and around 4,84,000 Covid-linked deaths but some experts believe the actual numbers could be higher.