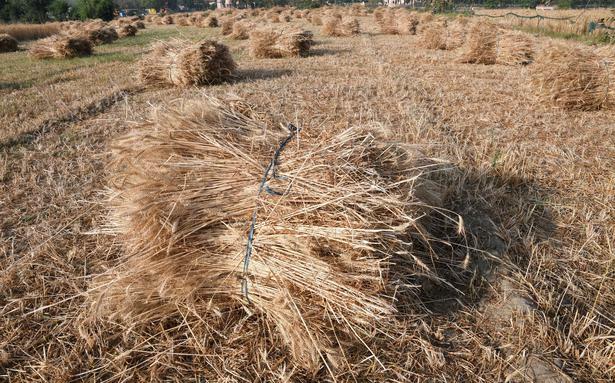 A video on India's wheat production, that is expected to fall on account of unusually warm weather conditions that persisted…

The Hindu
Oman to fast-track nod to pharma products

“The Centre will send trade delegations to Morocco, Tunisia, Indonesia, the Philippines, Thailand, Vietnam, Turkey, Algeria and Lebanon for exploring possibilities of boosting wheat exports from India," the ministry of commerce and industry said.

India plans to export 10 million tonnes of wheat during the ongoing financial year amid rising global demand for the grain globally, compared to the 7 million tonne (MT) of wheat it managed to export during 2021-22. Experts said the value of wheat exports could also jump, considering a depreciating rupee. Wheat exports in 2021-22 stood at $ 2.05 billion, official numbers showed.

However, it must be added that the government lowered its wheat production estimates by 5.7% to 105 million tonnes from the projected 111.32 MT for the crop year ending June. Although India is the second-largest producer of wheat, the output this year is estimated to fall owing to the early onset of summer.

“The wheat production estimates have been lowered but it won’t be having an impact on the exports. We have stock available in our granaries from last year too," a commerce ministry official told Mint.

The India Meteorological Department (IMD) had issued a fresh heatwave warning till May 15 after similar warnings earlier this month. Weather experts warned that temperatures in parts of Rajasthan, Gujarat and Vidarbha may jump to 46-47 degrees Celsius due to the dry and hot westerly winds.

The ministry further said that it has already set up a task force on wheat exports with representatives from various ministries, including commerce, shipping and railways, and exporters under the aegis of the Agricultural and Processed Food Products Export Development Authority (APEDA).

The Department of Commerce has also planned to organise a series of sensitization meetings on exports in major wheat growing states such as Punjab, Haryana, Madhya Pradesh, Uttar Pradesh and Rajasthan, the government said.

“The APEDA organized one such interactive meeting with various stakeholders including farmers, traders and exporters in Karnal, Haryana for promotion of wheat export and ensuring shipment of quality produce.

The stakeholders meeting was organized in collaboration with ICAR-Institute of Wheat and Barley Research, Karnal, where experts discussed opportunities and challenges in the sphere of wheat export," the ministry said.

A video on India's wheat production, that is expected to fall on account of unusually warm weather conditions that persisted…

The Hindu
Oman to fast-track nod to pharma products