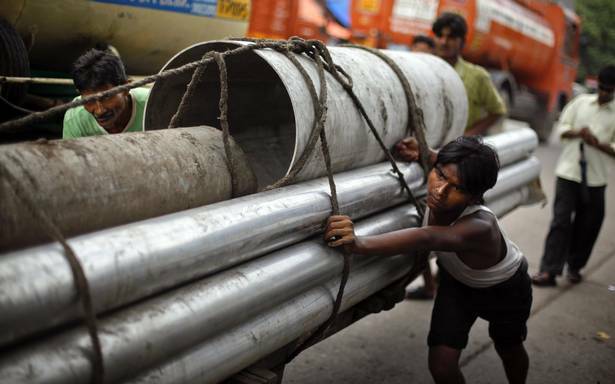 India is expected to post strong economic growth in the coming quarters, even as inflation, led by food prices, is likely to remain elevated, S&P Global Ratings said on Wednesday.

The economy is expected to clock 9.5% growth in the current fiscal year, followed by 7% expansion in the next year, it said, adding that high nominal GDP growth would be important for ensuring fiscal consolidation going forward.

“Given India’s weak fiscal settings and high stock of debt around 90% of GDP, the nominal GDP growth is going to be very important to prevent any further erosion of fiscal settings in the country and to enable some degree of fiscal consolidation going forward,” S&P Global Ratings Director (Sovereign) Andrew Wood said.

He said that the fiscal deficit would remain elevated over the next two years but the debt to GDP ratio is expected to stabilise or flatten out.

Mr. Wood further said India’s external position has strengthened in the context of the pandemic and India has been generating forex reserves at record pace.

“India’s external position is very strong and this is quite supportive of India’s sovereign rating despite the fact that we have had this deterioration in fiscal position concurrently,” he said.

“The second wave of the pandemic has been pretty costly to economic activity. Households have been affected .... households are going to be repairing their balance sheets and withholding from spending which means activity will remain below trend once the recovery gets under way”.

The Indian economy grew at 20.1% in April-June helped by a lower base, vis-a-vis 1.6% in the March quarter.

He said inflation has been on the upper end of the tolerance range, which means the Central bank will be watching inflation very closely.

S&P has the lowest investment grade ‘BBB-’ rating on India, with a stable outlook.