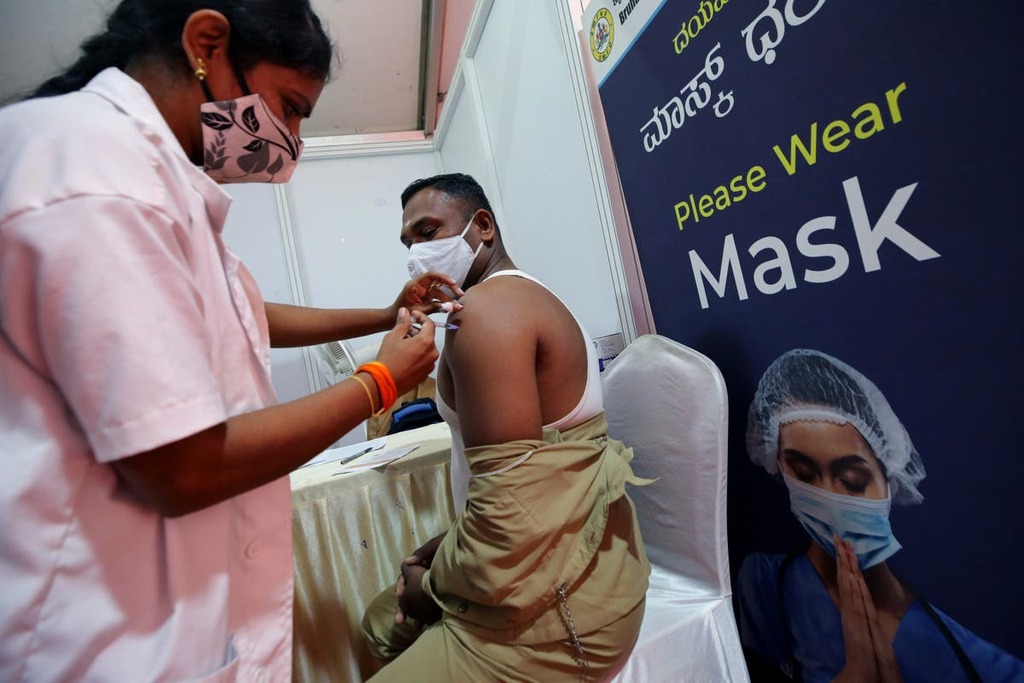 Healthcare and front-line workers along with people above age 60 with health problems lined up Monday at vaccination centers across India to receive a third dose as infections linked to the omicron variant surge.

The doses, which India is calling a “precautionary” shot instead of a booster, were given as new confirmed coronavirus infections rocketed to over 179,000 on Monday, nearly an eightfold increase in a week. Hospitalizations, while still relatively low, are also beginning to rise in large, crowded cities such as New Delhi Mumbai and Kolkata

India is better prepared now than it was last year when the delta variant overwhelmed hospitals. When cases spiked in March last year, not even 1% of its population of nearly 1.4 billion was fully vaccinated. India's creaky medical infrastructure meant millions likely died.

Since then, the government has bolstered healthcare, built oxygen plants and added beds to hospitals. About 47% of the population is now fully vaccinated and many have antibodies from previous infections. This may provide “hybrid immunity” -- a combination of immunity from previous infections and vaccines -- comparable to boosters, said Dr. Chandrakant Lahariya, an Indian epidemiologist.

Although the omicron variant seems to cause less severe illness than the delta variant, India’s massive population, crowded cities, and understaffed hospitals mean that health systems may still become strained. Elections may further spread the more infectious variant, allowing it to infect vulnerable people that previous variants didn't reach. But the biggest fear is that hospitals will be overwhelmed because of sick medical personnel, said Dr. Vineeta Bal, an immunologist at the Indian Institute of Science Education and Research in the city of Pune.

“There would be beds (in hospitals) but no people to take care of individuals,” she said.

India's hospitals are short-staffed at the best of times and health workers are distributed unevenly across states. Already, hospitals are becoming crippled as hundreds of health workers fall sick with the variant. Federal hospitals have been forced to relax quarantine rules and some have stopped routine services.

“Every third doctor is either symptomatic or positive. There is an acute shortage of staff. And there is an acute crisis,” said Dr. Anuj Aggarwal at New Delhi’s Safdarjung Hospital, one of India’s largest government hospitals.

At the Rajendra Institute of Medical Sciences in Ranchi city, the capital of Jharkhand state, a quarter of the 800 health workers were down with mild infections, said Dr. Prabhat Kumar, in charge of COVID-19 treatment there.

The delay in providing boosters could be costly, said Dr. T. Jacob John, former chief of virology at Christian Medical College in southern India. He said that having to administer third shots as a surge threatens to overwhelm hospitals would put an additional burden on health workers.

The belated boosters are being given to high-risk groups who were among the first to receive vaccines last year and whose immunity may be waning. Unlike other countries, where many people receive a different vaccine as a booster, most Indians will receive the same type, in most cases the AstraZeneca vaccine produced by India's Serum Institute the world's largest vaccine maker. The benefits of this are “relatively limited,” and India had been hoping to have more vaccines available so it could mix the booster shots Lahariya said.

“India does not have that kind of choice,” he said.

Serum Institute's AstraZeneca vaccine accounts for nearly 90% of all doses that have been administered in India, even though emergency approvals have been given to eight vaccines.

Some Indian vaccine makers have had manufacturing woes, while others such as Moderna and Johnson & Johnson have asked for protection from lawsuits over side effects, which India has been reluctant to grant.

India's vaccine drive has also been patchy. Around 30% of the population over the age of 60 wasn't fully vaccinated as of the end of 2021 and vaccinations for those below 18, about a third of India's population, started just last week.

The rate of vaccinations also varies vastly among states, from 75% in northern Himachal Pradesh state to 31% in eastern Jharkhand state, among India's poorest.

“These gaps will certainly get exposed,” said Bal, the immunologist.

AP journalists Sheikh Saaliq and Chonchui Ngashangva in New Delhi, Biswajeet Banerjee in Lucknow and Indrajit Singh in Patna contributed to this report.