A wildlife sanctuary in Madhya Pradesh is getting ready to welcome its new inhabitants, African cheetahs, which are being brought under an intercontinental translocation project and if everything goes as per plan, the majestic beasts will be here as early as next month.

The fastest land animal in the world, declared extinct in the country in 1952, will find a new home in the Kuno-Palpur National Park (KNP) in Sheopur district probably at a time when India will be celebrating its 75th Independence Day, a senior forest department official said.

“We are working on it. Cheetahs will come to Madhya Pradesh in August,” forest department's principal secretary Ashok Barnwal told PTI.

When specifically asked if the big cats, which can sprint at speeds of 80 to 130 km per hour, will arrive in the park on August 15, he said “It can happen.” Asked whether the world's fastest mammals will be brought from Namibia or South Africa, Barnwal said, “Initially from South Africa.” On the status of memorandums of understanding (MoUs) with these two countries on translocation of cheetahs, the top forest official said they are yet to be finalized.

An MoU will be signed with South Africa soon, Barnwal said without elaborating further.

Cheetahs are mainly found in Africa.

Wildlife Institute of India (WII) dean and senior professor Yadvendradev Vikramsinh Jhala also did not give any exact date for arrival of the fierce felines at KNP.

The Dehradun-based institute is also involved in the translocation project.

When pointed out that India was still to sign an MoU, either with Namibia or South Africa, for the cheetah reintroduction programme, Jhala said a lot of legalities are involved in such projects.

“It depends on the (Indian) government. It (MoU) can be done in two days or it may take two months. There are a lot of legalities involved in it,” the WII dean said.

Another forest department official said the number of cheetahs to be brought to India will be decided by the central government, but added preparations are on at KNP to receive and house them.

“Our preparations are going on in full swing to welcome cheetahs back to India but we don't know anything about the actual date of arrival or the number of big cats coming to Madhya Pradesh as it is being finalized at the level of Government of India,” principal chief conservator of forest (PCCF-Wildlife) J. S. Chauhan said.

He said KNP has made preparations for housing 12 to 15 cheetahs, including females, and has earmarked an area of five square kilometre having eight compartments in it for initially keeping the translocated animals.

Sheopur's divisional forest officer (DFO) Prakash Verma, who underwent training to handle cheetahs along with other officials, said 90 per cent preparations to house the animals on Indian soil have been completed.

Shortcomings pointed out by a team from South Africa and Namibia related to the reintroduction project are being addressed, he said.

“We were (during training) taught how to handle cheetahs and told about various aspects of their behaviour. Whatever we have learnt, we will be imparting those skills to over 125 staffers posted in KNP,” he said.

The National Tiger Conservation Authority (NTCA) and WII officials, who were part of the delegation that was trained by the two African nations, will also come down to KNP before the arrival of cheetahs to train the ground staff.

KNP is spread across an area of over 750 sq km and is capable of handling the carnivores as it has maintained a large prey base of cheetal, sambhar, blue bull, wild boar and langoor among others, Verma said.

The country's last spotted cheetah died in Chhattisgarh in undivided Madhya Pradesh in 1947 and the wild animal was declared extinct in the country in 1952.

The Wildlife Institute of India (WII) some years back prepared a cheetah reintroduction project.

The Kuno National Park, located in the Chambal region, has the right environmental conditions for hosting cheetahs, Verma said.

Earlier, the wildlife sanctuary was shortlisted as a second home for the famous Asiatic lions of Gujarat, but the programme ran into trouble after the government of the neighbouring state opposed shifting of the big cats from the Gir forest, officials said. 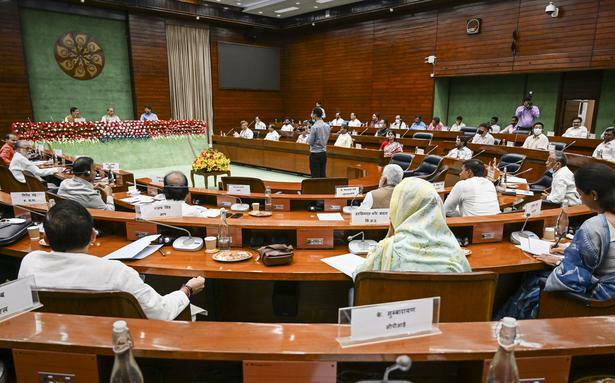 Morning Digest | Presidential election today; Centre to convene all-party meeting on situation in Sri Lanka on DMK, AIADMK’s request, and more
A select list of stories to read before you start your day

The Hindu
From analysis to the latest developments in health, read the most diverse news in one place.
Cheetahs likely to arrive in Madhya Pradesh’s Kuno National Park before August 15

New Delhi (AFP) - India and Namibia signed a deal Wednesday to bring cheetahs into the South Asian country, with…

At least 20 blackbucks have been rescued; 20 more believed to be stranded in the flood downstream of Dowleswaram

The Hindu
One place to find news on any topic, from hundreds of sites.
An effort to save the snakes of Nagarjunasagar Srisailam Tiger Reserve

Andhra Pradesh Forest Department, in collaboration with conservation organisations like the Eastern Ghats Wildlife Society, has initiated a project to…