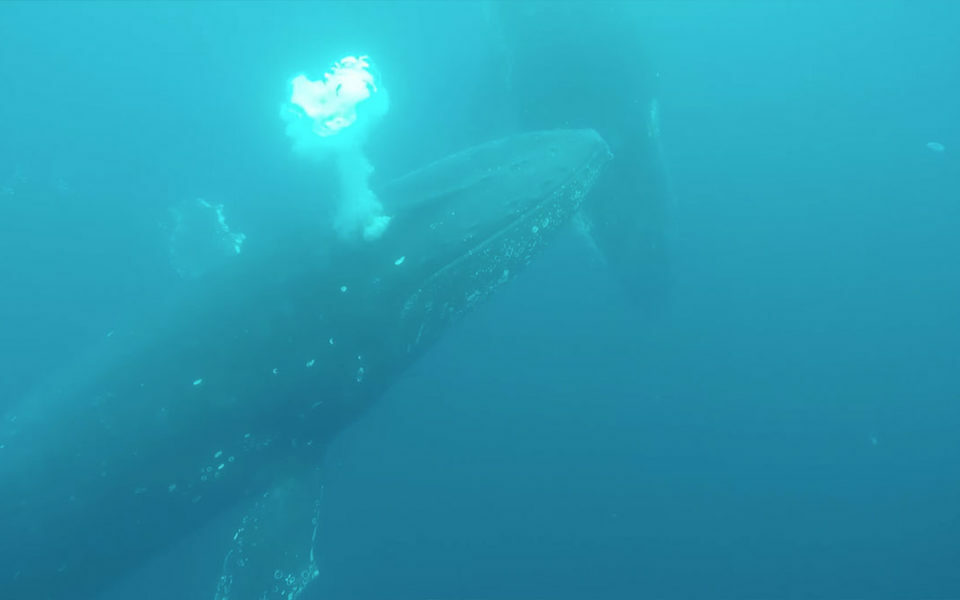 A rare and majestic sighting off the far south coast of NSW has made global headlines, with a super-sized whale encounter captured on film.

Sapphire Coastal Adventures delighted the internet by sharing breathtaking footage of a humpback whale ‘super-pod’ to social media on Tuesday.

“We have been so lucky over the past few days to witness large numbers of humpback whales coming together to feed on schools of baitfish,” the tour agency wrote on Instagram.

“This is an incredible phenomenon to witness, the sight, the sound and the smell is something to behold.

“We were privileged to see this occur at the same time last season and are so excited to see it again this year.”

The business operates whale-watching tours out of Bermagui and Merimbula, small coastal towns about 370 kilometres south of Sydney.

“It was really incredible, just lots and lots of whales,” Mr Millar said, adding that the smell was “really intense” as the pod lunched on baitfish.

“It was a sensory overload because there were just whales swimming and feeding everywhere,” Mr Millar said.

“It was pretty cool.”

Mr Millar revealed he was “pulling up on a whale” as he spoke to TND.

“I’ve literally got some whales about 10 metres from me,” he laughed.

The team have been out on the water filming content and keeping the boat running so they are ready to welcome tourists when restrictions ease.

“As soon as these COVID lockdowns finish we’ll be open with bells on, for sure,” Mr Millar said.

Earlier, he told CNN his team was on a training exercise last Thursday when the unexpected encounter occurred.

The group spotted more than 100 whales slapping their huge tails against the water, herding a ‘bait ball’ – a school of tiny fish swimming close together to form a sphere.

“We saw the whales swimming all around the area. They were just everywhere. We were very lucky”, he said.

The following day, the team located several pods of about 20 to 30 whales and on Saturday found a group of 40 to 50 whales working on another bait ball after noticing “a lot of activity”.

The annual migration of humpback whales is a boon for tourism in the region.

Thousands of people flock to coastal towns, including the nearby town of Eden, eager to spot the 30,000-kilogram marine mammals on their journey from Antarctica to the Great Barrier Reef.

Although the timing is not exact, between April and November humpback whales pass the east coast of Australia, often putting on “spectacular acrobatic displays”, according to the Department of Agriculture, Water and Environment.

August and September are peak times for spotting young humpbacks in the area, Sapphire Coastal Adventures notes on its website.

Mothers will follow with their babies a little later and can be spotted passing through in October and November.

Do you have a good news story you’d like us to share with our readers? We’d love to hear from you. Email: cboyes@thenewdaily.com.au