Incredible footage shows a huge basking shark swimming just metres away from kayakers in a bay in Britain.

Eilidh Beck was kayaking at Newtown Bay in Millport, Isle of Cumbrae, Scotland, on Sunday (May 8) when she spotted the approximately eight metre long animal in the water.

Footage shows the shark's fin and tail sticking out above the water as it swims around close to the island on the Ayrshire coast.

Eilidh, from Port Glasgow, Inverclyde, can be heard in the clip saying: "This is amazing. We are kayaking with sharks."

She added: "We were in the water for ten minutes when we spotted the shark swimming in the bay.

"It was about 14ft long and I would say the closest it got to any of our kayaks was about two feet away.

"We met our friend John and the three of us sat watching the shark for a good 30 minutes before letting it go about its business.

"Our waters have been pretty amazing and they are getting better every year.

"My friend Catriona and I are out most days, when weather permits.

"The day before we were lucky to come across a pod of ten plus dolphins.

"Two years ago I had the pleasure of kayaking with two pilot whales in the bay, which was amazing."

Eilidh raised concern that a proposed fish farm in the area could stop sightings like this in the future.

She added: "Unfortunately though, there is a fish farm applying for a license and if they get it that will be the end to our amazing sea life that we have around.

"It's going to be a very sad day if this happens."

Another kayaker, John Wright, is shown remaining calm and collected as the shark comes within less than five metres of him.

He then uses his paddles to keep himself from moving too close to the massive sea animal.

Eilidh shared the clip on social media later on that day (May 8), writing: "Today sharks."

The video has attracted over 10,000 views and dozens of comments from amazed social media users.

Nichola Low said: "Eek, no chance am I going in that water now."

Sorrel Conquest said: "Wow, I'd love to see one. Although my sister was once off the Devon coast water skiing and suddenly saw one right by her, nearly had a heart attack."

Basking sharks, once they reach maturity, can measure between 20-33ft and weigh over 5,000kg.

They are the largest fish in the UK and the second largest shark in the world behind the whale shark.

They occupy shallow coastal waters during spring and summer months, to bask in the sunshine, hence the name.

It comes after an absolutely massive shark was recently spotted further afield - off the coast of a US state.

The hefty animal weighing 1,000lbs and spanning 12ft in length has been identified as a Northwest Atlantic white shark by a nonprofit marine research group, which detected the shark, named ‘Ironbound’, off the coast of New Jersey late last month.

Ironbound was first tagged on October 3, 2019, near the West Ironbound Island - from which it gets its name.

The island is situated near Lunenburg, Nova Scotia.

According to nonprofit marine research group OCEARCH, the shark is estimated to weigh 450 kilograms and is 3.7 metres long. 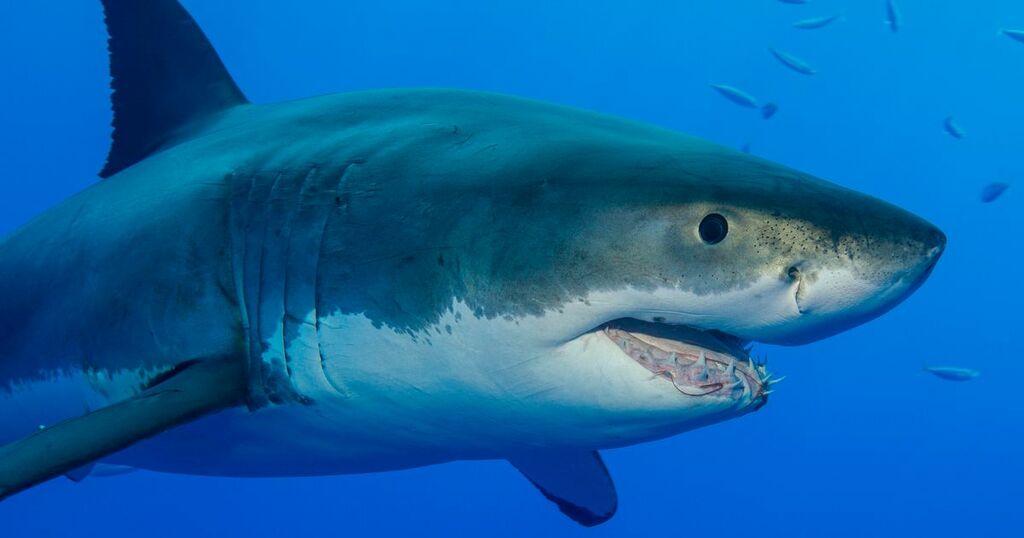 Great white shark stalking US coast is one of biggest in world
Sea creature is known as Ironbound and has travelled an estimated 13,000 miles in less than three years

Wales Online
One subscription that gives you access to news from hundreds of sites
What killed the whales? Two found dead off the Florida Keys, and one towed to a marina
Two sperm whales died within seven days of each other in the Florida Keys, according to state and federal officials.

The terrifying footage shows dozens of hungry sharks spotted just over 30 miles from Tampa, Florida, in the US, and…