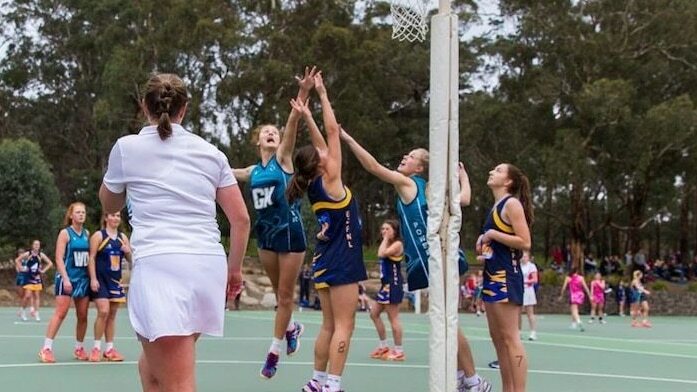 While it's more comfortable than the stiff tunic once worn to play netball, research suggests the modern netball dress could be turning off players.

Research from a Victoria University survey reveals girls feeling self-conscious in sport uniforms may be a reason girls' participation rates in sport are so low, particularly compared to boys.

The survey showed that 85 per cent of respondents preferred shorts and t-shirts during outside school sports and 76 per cent wanted their sport uniform to make them feel ready to play.

As the most popular women's sport in the country is played by over 1million girls, netball plays a huge role in engaging girls in team sport and physical activity.

Community netball leagues along with Netball Victoria are working to increase uniform options in the sport to retain players and make girls feel comfortable and confident playing the sport.

For 11-year-old Sienna Vivian, the choice to don shorts and a singlet instead of the traditional netball dress was easy.

"As soon as we got the option, I knew I wanted to wear shorts because I've just always worried about my dress flying up," she said.

"I can always change next season if I didn't like [the shorts]."

Sienna found sometimes when she used to wear the dress, she would get distracted trying to pull it down.

She said as a taller player the dress was shorter on her than other players.

"The dress didn't annoy me, but because, generally, I'm one of the taller plays in my age group often the dresses are short, so that would make me feel a bit self-conscious," Sienna said.

While there are two other girls who wear shorts in her team, Sienna says she has made the decision by herself and is thankful her association allowed her to choose.

Given the disrupted season, it was before the last COVID lockdown that Sienna played her first game in her new uniform.

Given the disruptions to community sport over the last 18 months, the Traralgon Netball Association president Deb Archer is hoping the new uniform options encourage players to stick with netball.

With player numbers down from previous year, the association changed the uniform policy to include shorts and a top, to make the sport more comfortable and affordable.

As well as the financial considerations, she said in the last few years some parents said their daughters are felt self-conscious in the uniform.

"We still retained the flexibility for those clubs that wanted to have the pride in the uniform, and already had the sets [of uniforms] there," Ms Archer said.

"So it's been it's been well received across the board."

Netball Victoria writes sample by-laws that provide a guide for every Victorian netball league and association to use, however, the ultimate decisions about uniforms come from the leagues themselves.

The organisation hopes by changing the sample by-laws and with a coordinated campaign later this year, more community netball leagues will follow suit in providing alternative uniform options.

"We're calling for administrators and ask for grassroots level to reassess the uniform policies to assist girls feeling comfortable and confident when participating in our sport," Mr Camilleri said.

Part of the push has also been around about how clubs can support players who identify as transgender or gender diverse to feel comfortable playing the sport.

The Catani Football and Netball Club in the Ellinbank league are also looking to include new uniform options for next year including pants and a long-sleeve top to accommodate the weather conditions.

"Not long ago, we were up at Neerim South playing in four degrees [Celsius]," said club president Angela Branbury.

While Ms Branbury said says hopes having consistency in what they train and play in might enhance players' performance if they're more comfortable.

"It's a unique sort of situation," she said.

"Everyone trains in the tights or the shorts and yet they put on a dress to play."

While Ms Branbury says it's important to update the uniform to make netball more inclusive for everyone, her netball dress will always have a special place in her heart.

"I'm not the fittest looking netball athlete there is," she said.

"I'm 44 myself and I've been playing for a very long time, but I love my dress … it represents the club and my association."

For Ms Archer, it's all about keeping as many players involved in the sport as possible.

"I think at the end of the day, the uniform doesn't change the way the game is played," she said.

"If we can make that as accessible as possible and as easy as possible in a young domestic league, I think that's really important."