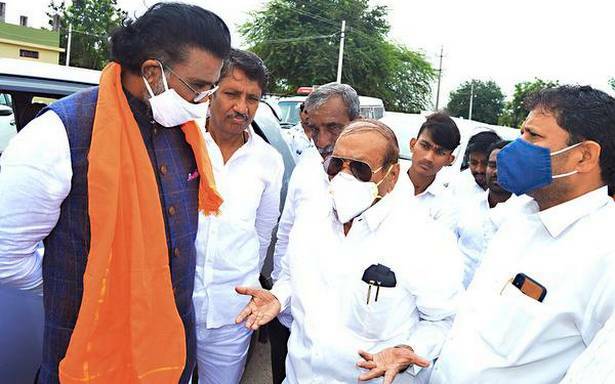 Minister for Transport and Scheduled Tribes Welfare B. Sriramulu faced an embarrassing situation at Bandalli village in Yadgir taluk on Saturday after Baburao Chinchansur, former MLA and chairman of the Nijasharana Ambigara Chowdayya Abivriddhi Nigama, stopped the vehicle in which the Minister was travelling and strongly urged him not to inaugurate Ekalavya Model Residential School, constructed by the Department of ST Welfare, at Bandalli because he was not invited for the programme.

He said the project was sanctioned when he was a Minster and he was insulted by officials by not inviting him properly.

Mr. Chinchansur was not convinced even after MLA Venkatreddy Mudnal and other BJP leaders requested him with folded hands to allow the Minister to inaugurate the project.

Mr. Sriramulu, who was visibly upset over the development, finally decided not to inaugurate the school building and returned to Yadgir city to take part in other scheduled programmes. But, this made his followers angry and they started a dharna by sitting in front of the Minister’s vehicle and demanded that the building be inaugurated as scheduled.

Police personnel convinced the protesters and allowed the Minister’s vehicle to move from the spot.

Later, Mr. Sriramulu told reporters in Yadgir, “Mr. Chinchansur is a senior leader and has represented Gurmitkal constituency, under which Bandalli village comes. He might have been upset. I will talk with the Deputy Commissioner about this issue and seek disciplinary action against the officer concerned if there has been any violation of protocol in inviting him.”

The school building has been built at a cost of ₹20.2 crore on 20 acres of land in the village to help poor children to get education. When the programme was cancelled, residents of the village expressed their anguish against the attitude of Mr. Chinchansur.

When contacted, Deputy Commissioner R. Ragapriya told The Hindu that there were no lapses in inviting Mr. Chinchansur as the invitation card was sent to his residence and the acknowledgement received was in the custody of the officer of the department. “Mr. Chinchansur’s name was published in the invitation card. But, I don’t know the reasons for his objection,” she added.

Meanwhile, hundreds of students from various residential schools who had gathered at the newly constructed school to take part in a discussion with the Minister returned disappointed after the programme was cancelled.