In Rodrigo Duterte’s war on press freedom, Maria Ressa stands up for the truth 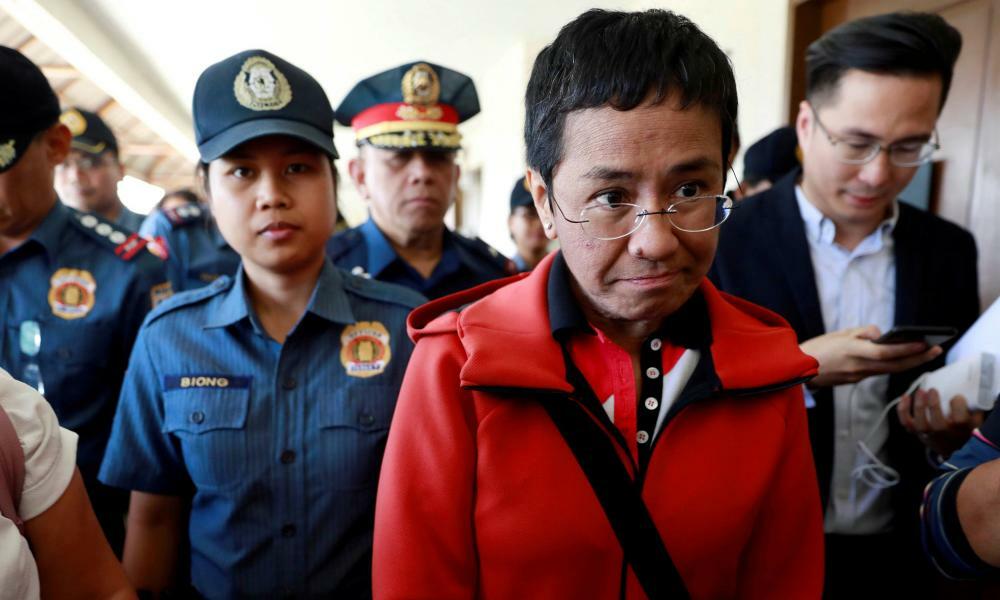 For the first time, a Filipino person, Maria Ressa, has been awarded the Nobel peace prize – “a win for Filipinos, for journalists, and for the global fight to uphold press freedom,” as her colleague Lian Buan puts it.

Ressa, the co-founder and chief executive of the news site Rappler, shares the prize with the Russian journalist Dmitry Muratov in recognition of their individual activism and relentless fights for press freedom. She is a symbol of courage in light of the human rights situation in the Philippines. Since the president, Rodrigo Duterte, took office in 2016, even residents with no link to drugs have been touched by the thousands of extrajudicial killings that have taken place. According to Human Rights Watch, during the Covid lockdown between April and July 2020, the country saw the number of killings increase by more than 50%.

Ressa and Rappler have fought for the reality of Duerte’s “war on drugs” and its consequences to be kept in the spotlight. She has also come to symbolise the fight and struggles many Filipinos experience on a daily basis. Nearly every Filipino can tell you a story of how someone has been attacked, killed or kidnapped in front of them, often in a case of mistaken identity. No one’s family, including mine, has been left untouched by the abuse of power and corruption that has been inflicted on the public.

Official government figures state that since 2016, at least 6,117 suspected drug dealers were killed during police and security forces operations. However, the UN cites that in June 2020, government figures already recorded more than 8,600 deaths.

Drugs are not uncommon in impoverished urban areas of the Philippines, but the number of lives affected by Duterte’s bloody war is innumerable. Children of victims are left behind and often find themselves fighting to survive in an already difficult environment, living in cramped conditions and often struggling to access clean water and sanitation. Many, especially those from large families all under one roof, suffer from malnutrition. As Human Rights Watch said in a recent report, the death of a family member who earned money leaves the children of victims facing extreme economic hardship. Many of them have suffered psychological distress, sometimes leading them to drop out of school and take on paid work from a young age. Others have been bullied by their peers and even left to live on the streets. And with many looking for justice and accountability, Ressa has been ruthless in her fight for the truth.

In the face of multiple threats, criminal charges and two arrests, Ressa has continued to speak out against Duterte and safeguard freedom of expression. She joins Filipino environmental activists, liberal politicians and LGBT groups and individuals who have been threatened and attacked for challenging the administration’s discrimination and promotion of disinformation. According to the Center for Media Freedom and Responsibility, by the end of 2020, 19 journalists had been killed under Duterte’s administration, while there were at least 171 cases where journalists were threatened or attacked between June 2016 and April 2020. State agents are often the alleged perpetrators of these actions, while journalists frequently face harassment and threats of libel or being barred from coverage. The Philippines continues to be a dangerous place for those working in the press.

In 2017, Rappler was accused of violating the Philippine constitution and declared by Duterte in his state of the union address as “fully owned by Americans”. He even went on to say: “Not only is Rappler’s news fake, it being Filipino is also fake.” The criticism was later found to have no basis but marked the start of a retaliation against Ressa, her colleagues and her mission for truth. She and a former Rappler researcher, Reynaldo Santos Jr, are currently out on bail after being convicted of cyber libel in June 2020 and facing up to six years in prison. They have filed an appeal and await its outcome.

Despite these continuous attacks, Ressa has stood her ground in what can only be described as a heroic act of defiance and courageousness. Journalism and democracy in the Philippines may be nearing a cliff edge, but Ressa winning the Nobel peace prize is a shining light in a long, dark tunnel.

Just a glance at social media confirms this. The former presidential spokesperson Edwin Lacierda said: “You [sic] do our country proud in the midst of impunity and the narrowing of the democratic space,” while the human rights lawyer Leni Robredo has affirmed her “tireless efforts … for truth and accountability”. To me, as a Filipino journalist, Ressa is an inspiration. For others across the world and especially in the Philippines, her work makes it possible to continue fighting the good fight – or “hold the line” as Ressa calls it.

In a live conversation with Rappler, Ressa said: “When you don’t have facts, you don’t have truth, you don’t have trust. Trust is what holds us together to be able to solve the complex problems our world is facing today.” The award is vindication of the work she and her colleagues at Rappler have done, not only for the Philippines but for press freedom and democracy globally. She goes on to say she hopes the win will be “energy for all of us to continue the battle for facts”. Let us join her and not be silenced.