'In another year or two, we will lose the Negev' warns fmr. IDF official 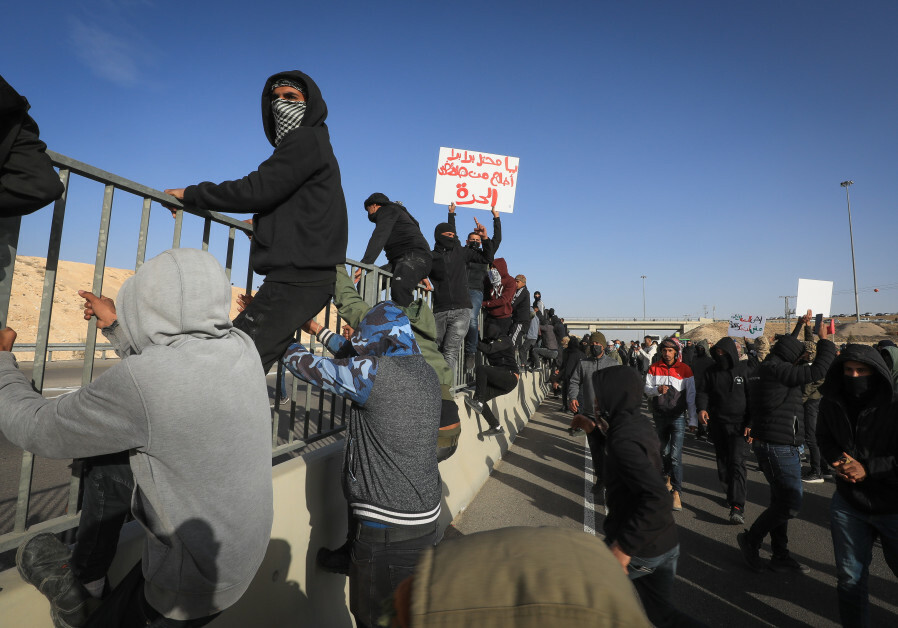 About 2,000 people, residents of Bedouin villages, demonstrated for long hours on Thursday against tree planting by Keren Kayemeth LeIsrael-Jewish National Fund (KKL-JNF) in the Negev. According to reports, a policeman was injured by a stone thrown at him and two demonstrators were evacuated to Soroka Medical Center in moderate condition, along with the blocking of the roads to Arad and Dimona and stone-throwing against vehicles traveling on these roads.

Maj. Gen. (Res.) Israel Ziv, former head of the IDF Operations Directorate, addressed the situation in the south of the country on Friday morning. In a conversation with Nissim Mash'al on 103FM, he stated: "This brings me back to the pictures of the beginning of the First Intifada. The State of Israel should not take the matter lightly. If we continue like this, we will lose the Negev in another year or two."

Ziv expanded on his remarks: "We are seeing a kind of uprising which is being ramped up by politicians. There could be a popular uprising here. A situation in which the young people who took on nationalist responsibility and came out against the IDF, while the Palestinian leadership did not know about it at all, and it either prepared or joined or rode on this wave only later."

"Unfortunately, we have a similar situation in the Bedouin sector," said Ziv. "There is a group of young people here, some with children or are husbands of women brought from Gaza or the southern Hebron Mountains. There is a phenomenon of accelerated Islamization among this society. In all recent years, while the State of Israel ignored them, they have built a kind of autonomy."

"They live in an independent system of economy and conduct, some also do not know Hebrew and do not go to school. We are seeing a kind of uprising, of course it is also heated up by politicians who want to earn their points from it." Ziv warned that "there could be a real popular uprising here, perhaps not on the scale of Judea and Samaria but on a scale that would not allow the way of life of the residents of the Negev."

In response, Mash'al asked him if his statement was not too serious. Ziv replied in the negative: "Unfortunately not. Perhaps technically or officially we are still there, but in practice for almost 20 years there has been no new settlement in the Negev. Unfortunately, I stand behind the statement that Israel has abandoned the Negev."

Asked if the dispute is really over land, Ziv replied: “The land is unequivocally not in terms of a legal dispute over land ownership. There is also a traditional perception of the Bedouin to hold on to the Negev and they consider themselves the owners, and there is also the nationalist interest. When the two things come together, we see the result we are seeing now. This is not really about them taking from some farmer the land on which he grows his wheat. There's a much heavier story here than this. Look what's going on there, I do not believe there is even one business there that does not pay protection to the Bedouin. Is this sovereignty? Is this a situation where there is law and order? The one who controls there is the one who uses force."

When asked what he thinks should be the solution to the problem, Ziv said that "the State of Israel should not take the matter lightly but put this issue at the top of its priorities. This is much more important than the Omicron. The coronavirus will pass in another year or two, but if we continue like this we will lose the Negev. We need to occupy it in quotation marks, not with tanks, but with a very strong presence of security forces. It needs to be re-occupied economically, including infrastructure, the establishment of settlements - everything. We need to set up a special cabinet that will deal 100 percent with this matter."

He later referred to the deaths of IDF officers in the training accident of the Egoz unit, when he said that what led to the wrongful shooting was a routine of stealing weapons from the bases. "I learned from the reports and conversations with the IDF that the problem there really stems from both the circumstances and an essential problem of an initiative, which is at its base positive, but is not coordinated between the soldiers and the framework," he explained.

"This is what brought about these dire circumstances. It must be said that the situation is such that because equipment had been stolen from them the day before and they were anxious that more weapons would be stolen from them, the officers took the initiative which stemmed from a great deal of responsibility. At the end of a training day, they took themselves and went to scan the area to see that God forbid there were no weapons left there. They showed great responsibility," he explained.