In 1952, scientists united to study Earth — we’re still living with the consequences

There are some years when it feels like everything happens all at once. Usually, there is a trigger moment: A war, a death, a birth, a crisis, a miracle. Sometimes these triggers arise organically, and other times they are constructed and set in motion deliberately. That’s what happened in 1952, when nations around the world came together to pursue science around a new frontier — Earth.

It may be 70 years since the International Geophysical Year, but the event reflects a current truth. You can read that story and more in today’s newsletter.

This is an adapted version of the Inverse Daily newsletter for Friday, May 20, 2022. Subscribe for free and learn something new every day.

It is Friday — we made it to the weekend. As a special treat, we have a fabulous read on the symbolism infused in a new movie, Men — these symbols stem from Norman and pagan culture in the north west of Europe, Britain, and Ireland. If you are in that part of the world or just visiting, keep an eye out for them! Now, on with the show.

70 years ago, the world united for a monumental scientific project

On May 16, 1952, scientists announved the International Geophysical Year — a year to study Earth.

By the time the actual “year” went down from July 1957 to December 1958, more than 30,000 researchers across 67 countries lent their brightest minds to the IGY, producing volume after volume of new discoveries. The theory of plate tectonics, the detection of the Van Allen radiation belts above Earth, developments in oceanography, and the sprouts of the Space Age all came out of this 18-month period.

But in the background of it all was the acceleration of the Cold War. Much like today, politics played a significant role in the science of the IGY.

But first, let’s go to the inspiration: Despite the outer space ambitions, the meeting can trace its roots to the 19th-century fixation with the North and South Poles.

A galaxy 65 million light-years away holds secrets to an ancient traffic jam, which may have kicked out dark matter in the process. To learn more, scientists turned to an unusual inspiration to study dark matter: the TV show House.

Like Hugh Laurie’s titular character in the show, the authors whittled down “symptoms” to find a new way for giant collisions between galaxies to expel dark matter, which could yield critical insights on the elusive phenomenon’s properties. The results were published Wednesday in Nature.

In the series House, a cantankerous doctor seeks solutions for mysterious medical ailments patients suffer from.

“They do ‘differential diagnosis’ in the series, basically writing down all the symptoms and possible causes, and trying to find which disease explains all the symptoms,” study lead author Pieter van Dokkum, an astronomer at Yale University, tells Inverse.

“That inspired me to do the same with DF2 and DF4 — write down all we know, and see if there is a simple explanation for it all.” (DF2 and DF4 are two galaxies with a surprising lack of dark matter.)

Here’s how they did it.

NASA InSight shutting down and more: Understand the world through 9 images

Sometimes, seeing is believing. In this week’s round-up of intriguing science images, you can learn about NASA’s InSight Mars lander and our own galaxy’s black hole.

But there’s more: We explore images of neurons forming, lettuce grown from space dirt, and a way to generate electricity using infrared light emitted by Earth at night. See science in action.

Alex Garland’s film Men is a stripped-down folk horror fable that stars Jessie Buckley and Rory Kinnear as a woman escaping recent trauma and a man who stalks her through the countryside, taking the form of every person she meets.

But the true stars of Men might not be the actors at all. Instead, it’s a pair of ancient symbols that appear throughout the film and reveal its hidden meaning: Sheela-na-gig and Green Man.

At a Q&A following the movie’s premiere, Garland revealed that he’s been obsessed with the symbols for over a decade and spent the last 15 years trying to write them into a script. So when Men finally arrived, Garland was extremely involved in creating these characters. Kinnear, who plays a version of Green Man among other roles, tells Inverse the writer-director even applied his Green Man makeup by hand.

Inverse spoke to Buckley and Kinnear about what Men has to say about trauma, the importance of these symbols to the plot, and more. 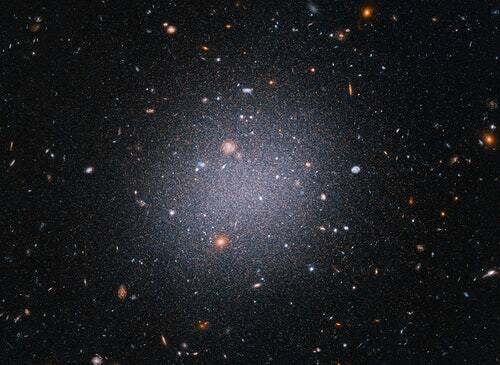 These galaxies have no dark matter — and astronomers may finally know why
A galaxy 65 million light years away holds secrets to an ancient traffic jam, which may have kicked out dark…

Inverse
One subscription that gives you access to news from hundreds of sites
'Men' explained: The movie's stars unpack its mysterious ancient symbolism