In 1929 letter, Churchill ponders 'pleasing and profitable' pursuits outside politics 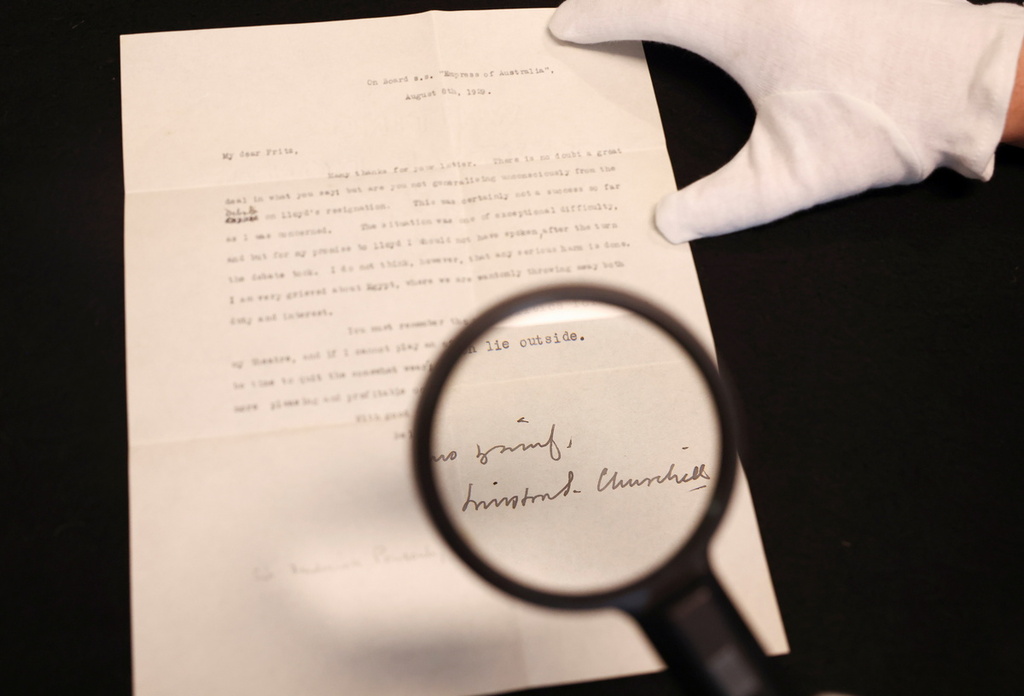 A 1929 letter in which Winston Churchill refers to Britain's House of Commons as his "theatre" but contemplates quitting politics will go up for auction in London next week.

In the type-written letter to his friend Sir Frederick Ponsonby, the future war-time prime minister wrote about pursuing "more pleasing and profitable" occupations than being a member of parliament.

Months earlier, in May 1929, the Conservatives had lost power in an election and were replaced by a Labour minority government, although Churchill retained his seat as member of parliament for Epping.

"Churchill is thinking about his next steps," said Matthew Haley, head of books and manuscripts at Bonham's auction house.

"He is about to set off on a tour of America, a great holiday with family and he writes to his great friend Ponsonby 'the House of Commons has always been my theatre'. So he's not given up on politics just yet."

Many historians view the decade between 1929 and 1939 as Churchill's "wilderness years", although he did remain engaged on several issues, including India and the threat from Adolf Hitler's Germany, before becoming prime minister in 1940.

He wrote the letter on Aug. 8, 1929 during a trans-Atlantic crossing he took following a debate in parliament about which he said: "It was evident I was almost alone in the house."

"You must remember the House of Commons has always been my theatre, and if I cannot play an effective part there, it would indeed be time to quit the somewhat wearisome pursuit of politics for the many more pleasing and profitable occupations which lie outside," Churchill wrote.

The ship, the Empress of Australia liner, docked in Quebec a day later and Churchill went on a coast-to-coast trip across Canada before visiting the United States. There, he dined with Charlie Chaplin and newspaper tycoon William Randolph Hearst.

Ponsonby, known as "Fritz", was a court figure who had been equerry to Queen Victoria and joint private secretary to Edward VII and George V.

The letter will feature in an auction at Bonham's on Sept.15 and is expected to fetch between 4,000 and 6,000 pounds.