Albuquerque in the Wayne Taylor Racing Acura ARX-05 got the jump on polesitter Sebastien Bourdais in the #01 Chip Ganassi Racing Cadillac DPi-V.R.

The turbocharged car pulled ahead from Turn 4 with Jarvis tucking the Meyer Shank Racing Acura into third ahead of the second Ganassi Cadillac fourth, ahead of Tristan Vautier (JDC Miller Motorsports Caddy) and Tristan Nunez (Action Express Racing Caddy).

As they threaded through GTD traffic on lap 10, Bourdais muscled past Albuquerque down the inside at Turn 2 to grab the lead. Within three laps, Bourdais had a lead of three seconds and the main battles in class were between Albuquerque and Jarvis for second, and Vautier and Nunez for fifth.

The latter pair pitted together off strategy on lap 21, in anticipation of a caution for a spun LMP3 car, but the little prototype got going again unassisted. Pipo Derani replaced Nunez in the #31, but the car remained behind Vautier for a couple of laps before Derani got the pass completed down the inside at Turn 4.

The Albuquerque versus Jarvis battle was interrupted by pitstops for both while running 5.5s behind leader Bourdais. Ricky Taylor replaced Albuquerque and Tom Blomqvist replaced Jarvis, but the two Acuras departed some five seconds apart.

Bourdais’ stop by the Ganassi crew was superb, and he ceded no time to Taylor initially. But a combination of traffic and a charging Taylor brought the Cadillac’s advantage briefly under a second before Bourdais extended the margin back out to over four seconds. Blomqvist meanwhile chipped away at his deficit to Taylor and drew to within 1.5s by lap 50.

At the restart, Taylor was all over van der Zande and they ran side by side through Turns 4 and 5. It was the Dutchman who came off worst, spinning through the grass at Turn 6 after clipping the back of the WTR car. Race Control decided not to intervene, resulting in an Acura 1-2, with Derani in third in the highest-placed Cadillac.

That didn’t last long however, as Blomqvist encountered GT and LMP3 traffic. The MSR Acura lost out to both Derani and Bamber and dropped to fourth, prompting a final stop with 43 minutes remaining.

Ganassi reacted and, while Westbrook got ahead of Bamber, both Cadillac crews emerged behind Blomqvist again. WTR and AXR subsequently called in Taylor and Derani respectively, but Blomqvist’s charge on new tyres had produced fastest lap and meant Derani too came out behind the MSR machine.

Once van der Zande stopped the #01 CGR Caddy, he emerged last in class, so Taylor now led Blomqvist by 5.6s, with Derani 3.4s further back, well ahead of Westbrook’s battle with Bamber and van der Zande.

Taylor held firm in the closing stages to take the chequered flag from Blomqvist by 2.1s, with Derani 15s further back and 20s ahead of the Ganassi pair.

Two-time Indianapolis 500 winner Montoya had caught the leading PR1 Mathiasen Motorsports ORECA, driven by Jonathan Bomarito, who was held up by a LMP3 competitor.

The Colombian ace tried to take the slower car and Bomarito in one go at Turn 2, but instead thumped Bomarito into a spin. Inevitably, he had to serve a drive-through penalty.

But the PR1 Mathiasen car had lost so much time in the spin, Montoya was able to take his penalty and emerge only two seconds behind. Montoya went around Bomarito again to take the class lead with 12 minutes left on the clock. He then pulled away to win the class by 13.5s, finishing seventh overall.

Core Autosport's Jon Bennett and Colin Braun took the spoils in LMP3, finishing 13th overall and a lap ahead of the JR III Racing machine of Garett Grist and Ari Balogh.

Inception Racing looked set to have scored its first win in the category, following after a stunning final stint from Jordan Pepper in the McLaren 720S GT3 he shared with Brendan Iribe, only for the car to be dumped to last in class for coming in underweight.

South African Pepper closed in on the battle for the lead in the final 20 minutes. He dispatched the Lexus of Aaron Telitz, before latching onto the fight for first between the BMW M4 GT3s of Bill Auberlen (Turner) and Bryan Sellers (Paul Miller Racing).

After passing Auberlen, Pepper nuzzled the tail of Sellers' BMW and on the long drag down to Turn 4 the McLaren moved ahead. The tight-on-fuel BMWs remained in the McLaren’s slipstream, as Pepper took the on-the-road win.

But the post-race penalty handed down to the Optimum-run squad gave victory to Auberlen and Robby Foley, with Sellers and Madison Snow finishing second as Telitz and Frankie Montecalvo took third.

Afterward, Auberlen revealed that such was their interest in getting the M4s to the finish in what became a fuel mileage competition, that he and Sellers made a pact.

“Bryan Sellers and I made an agreement on the radio – our teams were talking – that we were going to work together to save as much fuel as we could and leave it to about a lap-and-a-half at the end,” said the veteran, who extended his all-time highest IMSA victory tally to 65. “That’s how much fuel we would have so we could race at least one lap to try to defend.

“The McLaren caught us too early, so we had to just let him by, and we thought for sure he wasn’t going to make it, no way. Turns out he’s underweight, and we did the best we could. We barely finished with fuel.” 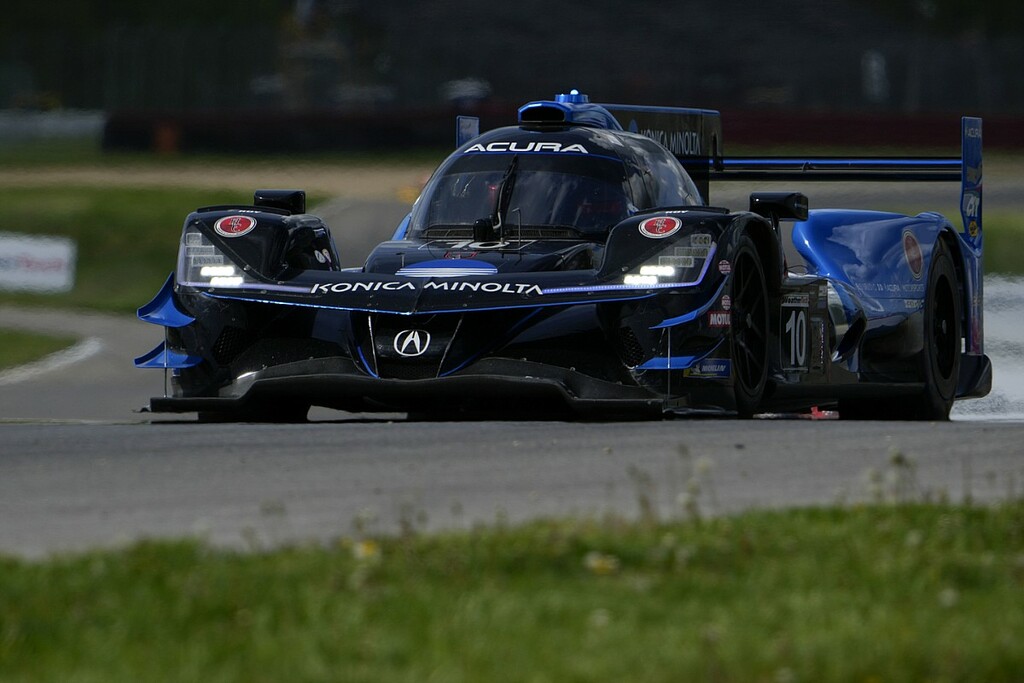 Motorsport
One subscription that gives you access to news from hundreds of sites
Mid-Ohio IMSA: Bourdais takes pole in Ganassi Cadillac