Two central figures in the new evidence linking President Donald Trump more closely to the U.S.’s request for Ukraine to investigate the president’s political rivals are scheduled to testify before lawmakers in the coming days.

Acting Ambassador to Ukraine Bill Taylor told lawmakers in the first public hearing in the impeachment inquiry on Wednesday that one of his aides overheard Trump asking Ambassador to the E.U. Gordon Sondland over the phone about the status of “the investigations” just a day after his July 25 phone call with Ukrainian President Volodymyr Zelenskiy.

Taylor’s aide, State Department official David Holmes, is now scheduled to give a closed-door deposition on Friday, an official working on the impeachment inquiry said Wednesday.

Sondland — who told the president on the July 26 phone call that the Ukrainians were “ready to move forward” with the investigations, Taylor said Wednesday — will testify at a public hearing next Wednesday.

Taylor and Deputy Assistant Secretary of State for European and Eurasian Affairs George Kent outlined their concerns over a second, “irregular channel” in the Trump administration conducting foreign policy in Ukraine for the president’s political benefit at home and efforts by that irregular channel to smear longtime State Department officials such as ex-Ambassador to Ukraine Marie Yovanovitch.

At Wednesday’s hearing, House Democrats took aim at the various explanations Trump and his congressional allies have given for his conduct in Ukraine: They said the request for investigations into former Vice President Joe Biden and his son Hunter Biden were not business as usual in international affairs, as Republicans have maintained. And Trump’s attempt to crack down on Ukrainian corruption was not the same as Biden’s before him, Kent told lawmakers.

Republican members griped about what they view as an unfair impeachment process marching toward a predetermined conclusion and pointed out that Trump ultimately unfroze the military aid package to Ukraine without ever receiving the “favor” of political investigations.

Meanwhile, Democrats indicated Wednesday that they will push onward with impeachment out of a sense of constitutional duty, regardless of whether public sentiment favors them.

Here is the latest on the impeachment inquiry:

OMB officials: Mark Sandy, a high-ranking career official at the Office of Management and Budget, is expected to testify in the impeachment inquiry Saturday.

“If he’s subpoenaed he will appear,” Barbara Van Gelder, his attorney, said Thursday. Gelder said she expects him to be subpoenaed.

Sandy, deputy associate director of OMB’s national security division, implemented an initial hold on Ukraine aid last summer. Subsequent holds were signed by Michael Duffey, associate director of National Security Programs and a political appointee at the agency. Administration officials said in the past that OMB counsel had cleared the placing of the holds.

No Chopper Talk: President Trump likely will not address a report of a second U.S. diplomatic official who overheard a phone call Sondland took in a Kyiv restaurant from him seeking an update on Ukraine possibly investigating his domestic political rivals.

The president departed the White House almost an hour behind schedule for a political rally in Louisiana without stopping to talk to reporters in what has become known colloquially as “Chopper Talk.”

Trump unaware: President Trump was not briefed by senior aides about House Democrats’ first public impeachment hearing and did not watch it in full after he wrapped his workday on Wednesday, a White House official said.

McCarthy calls Schiff a liar: House Minority Leader Kevin McCarthy asserted Thursday that he believes that Intelligence Chairman Adam B. Schiff is lying when he says he has not met with the whistleblower and does not know the identity of the whistleblower.

Clarification: House Judiciary ranking member Doug Collins wrote a letter Thursday to Chairman Jerrold Nadler asking if he intends to hold impeachment hearings in the panel or simply receive a presentation of evidence from the House Intelligence Committee, which is all the procedures the House adopted last month require.

If the committee does not hold hearings and recall fact witnesses, it would deny the president due process since Trump and his counsel are only permitted to participate in the Judiciary proceedings, not the Intelligence Committee hearings, the Georgia Republican argued, saying he’s most concerned that Nadler seems willing to allow Schiff “to strip the accused of deep-rooted principles of procedural fairness ... and thereby denying due process to the American electorate.”

“I salute Chairman Schiff for the dignity and statesmanship that he brought," she said, commending Intelligence Committee Democrats for their "great patriotism and professionalism” in conducting the hearing.

She dismissed Republicans’ characterizing Wednesday’s hearing as ineffective because the witnesses did not have firsthand information.

“Don’t fall into this secondhand stuff. That is such a fraudulent proposition put forth by the Republicans … I just won’t even dignify what they’re saying in that regard. I just won’t,” she said.

But when pressed, Pelosi did respond by noting the GOP complains about the secondhand information while their party in the White House obstructs all the people who have first-hand knowledge from testifying.

“That’s bribery”: Pelosi reiterated that Democrats haven’t yet made a decision about whether to impeach Trump but she said Trump’s threat to withhold military assistance to Ukraine for a public statement on investigations into his political rivals is a bribe, which the Constitution lists as an impeachable offense.

“That’s bribery,” she said, noting that Trump admitted to it.

While Pelosi claims no decisions have been made about whether to impeach Trump, she’s also made strong statements about Trump’s actions that suggest that conclusion is inevitable. For example, the speaker said Thursday that “what Trump has done on the record in terms of acting to advantage — [asking] a foreign power to help him in his own election and the obstruction of information about that, the cover up, makes what Nixon did look almost small.”

“The president can come. If he has a case to make, does he want to come speak?” she said. Pelosi said if the president doesn’t want to testify he could also present in writing any exculpatory evidence he might have.

The view from the White House: After saying Wednesday that he didn’t watch the hearing, Trump spent part of his Thursday morning quote-tweeting conservative media’s coverage and fellow Republicans’ condemnation of the proceedings.

The president said that Democrats’ “star” witnesses could not point to an impeachable offense in his call with Zelenskiy and that should have ended the hearings. And he continued to call for the “fake whistleblower” to testify in public.

Democrats have said the whistleblower’s testimony is not needed since they have verified much of what he or she reported through other witnesses.

Sondland’s call: Taylor shocked lawmakers on Wednesday with new information directly tying Trump to the plan to withhold the aid package unless Ukraine agreed to investigate Joe Biden and the prior involvement of his son in the Ukrainian energy company Burisma.

On July 26, Taylor’s aide Holmes was at a restaurant in Kyiv with Sondland when Sondland called Trump to update him on meetings he was having with various officials, including a top adviser to Zelenskiy.

Holmes, whom Taylor did not mention by name, overheard the president ask Sondland about “the investigations.” Sondland told the president that the Ukrainians were “ready to move forward,” Taylor testified.

After the phone call had ended, Holmes asked Sondland about Trump’s thoughts on Ukraine. The ambassador responded that Trump was more concerned about “the investigations of Biden, which Giuliani was pressing for,” Taylor told lawmakers.

More evidence: The July 26 call, which Trump denied on Wednesday, is the most recent evidence of his personal involvement in the plan generated by his personal lawyer Rudy Giuliani and executed by Sondland, U.S. special envoy to Ukraine Kurt Volker, Acting Chief of Staff Mick Mulvaney, and others to pressure Ukraine into announcing the probes into the Bidens and alleged Ukrainian interference in the 2016 election on behalf of the Democrats.

Other evidence of Trump’s involvement are a May 23 Oval Office meeting when Trump told some aides to “talk to Rudy” about Ukraine policy and the president’s July 25 phone call with Zelenskiy, in which he asked for a “favor” from the Ukrainian president.

Hearsay, GOP says: Republicans have dismissed most of Taylor’s claims as “hearsay” since the acting ambassador did not have a direct communication pipeline to the president and never spoke with other officials, such as Mulvaney and Energy Secretary Rick Perry, accused of helping Trump carry out his pressure campaign on Ukraine.

Rep. Jim Jordan grilled Taylor on Wednesday for making suppositions about information he received secondhand and passing that along to lawmakers.

Impeachment panel Democrats responded with the fact that the White House has refused to make many of the primary actors — Mulvaney, Perry, Vice President Mike Pence, Secretary of State Mike Pompeo, and others — available for interviews and has put a freeze on committee-requested documents related to the probe.

Democratic senators have filed Freedom of Information Act requests to receive those documents, but the FOIA process often takes months or even years. 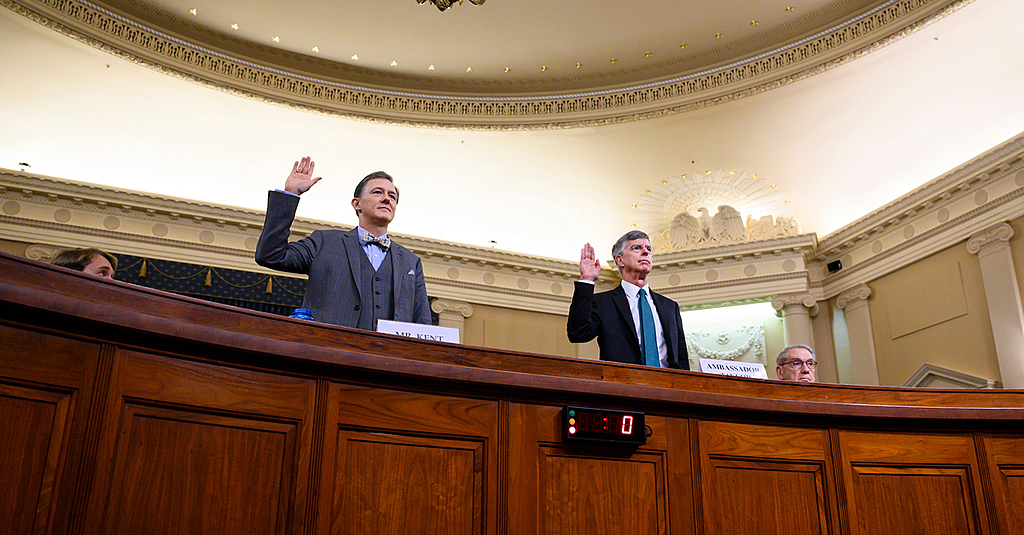 Roll Call
One subscription that gives you access to news from hundreds of sites
Impeachment news roundup: Nov. 15

Marie Yavinovitch, the ambassador to Ukraine who says she was yanked from post after she ran afoul of Giuliani’s rogue…

Democratic candidate says if fighting corruption was the true motivation for Trump dealings with Ukraine, the president should release his…

Washington (AFP) - The top US diplomat in Ukraine, in gripping public testimony at the historic impeachment hearing into President…