Key points:
• US President says he's too busy with other matters and isn't watching the hearing
• Launches a scathing video calling the hearing "single greatest scam in the history of US politics"
• William Taylor, acting ambassador to Ukraine, testifies Trump cared more about investigating Democrat Joe Biden than Ukraine relationship
• Republican senators tried unsuccessfully to delay the hearing by focusing on the unnamed whistleblower
• George Kent, deputy assistant secretary of state for European and Eurasian affairs, will also be appearing

The public phase of the Trump impeachment inquiry began with testimony from two career diplomats who Democrats see as key to building their case that President Donald Trump acted inappropriately in his dealings with Ukraine.

A lawyer handling the questioning for Republican lawmakers suggested the Trump administration's interactions with Ukraine could have been more "outlandish" than they actually were.

Steve Castor asked William Taylor, the top US diplomat in Ukraine, if the "irregular channel" the administration used for outreach to Ukraine was "not as outlandish as it could be."

Taylor laughed, but then conceded that it was not.

Taylor has described an "irregular channel" in which Ukraine policy was delegated to President Donald Trump's personal lawyer, Rudy Giuliani, and Gordon Sondland, the ambassador to the European Union, for the purpose of advancing the president's personal and political interests.

Although reported to be not watching, he took time to declare the hearing the "single greatest scam in the history of American politics."

Trump responded to the hearings in a new video directed at his supporters and released by the White House.

Trump says, in the video filmed in the White House Rose Garden, that Democrats want to take away his viewers' guns, health care, freedom and votes.

He adds that, "They're trying to stop me because I'm fighting for you. And I'll never let that happen."

Trump also spent the morning responding to the hearing on Twitter. He will be holding a press conference alongside his Turkish counterpart later in the day.

William Taylor, acting ambassador to Ukraine, and George Kent, deputy assistant secretary of state for European and Eurasian affairs, are appearing before the House Intelligence Committee in nationally televised proceedings.

But he told reporters as he meets with his Turkish counterpart in the Oval Office that he's "sure" he'll "get a report" from staff on the hearing, which he dismisses as a" witch hunt" and a "hoax."

Investigators are examining whether Trump abused the power of his presidency by pressing Ukraine's leader to investigate his political rivals.

Trump was scheduled around noon to receive Turkish President Recep Tayyip Erdogan for meetings, including a separate gathering with senators invited by the White House.

The inquiry focuses on a July telephone call in which Trump sought to get the leader of Ukraine to investigate Trump's political rivals.

Trump denies wrongdoing and has described the conversation as "perfect".

Democrats are trying to show the public that Trump pressured Ukrainian President Volodymyr Zelensky to investigate former vice president Joe Biden and his son Hunter Biden at a time when nearly US$400 million US military aid to Ukraine was being withheld.

In his opening statement, House Intelligence Committee Chairman Adam Schiff, D-Calif., outlined the facts of the inquiry that have been established by the witnesses who have already testified behind closed doors - facts, he argued, that "are not seriously contested."

The question is, do those facts mean that Trump invited Ukrainian interference in the 2020 election and conditioned official acts on Kyiv's willingness to do so - and, if so, is Trump's "abuse of his power" compatible with the office of the presidency?

"The matter is as simple, and as terrible, as that," Schiff said.

Rep. Devin Nunes, R-Calif., the top Republican on the committee, used the first lines of his opening statement to portray the Democratic impeachment inquiry as the evolution of a failed effort to remove Trump for unproved allegations of Russian collusion.

He went on to accuse Democrats of abuses including "trying to obtain nude pictures of Trump from Russian pranksters pretended to be Ukrainian officials" and "countless other deceptions large and small that make them the last people on earth with the credibility to hurl more preposterous accusations at their political opponents."

"Anyone familiar with the Democrats' scorched-earth war against President Trump would not be surprised to see all the typical signs that this is a carefully orchestrated media smear campaign," he said.

While questioning State Department witnesses at the hearing, Nunes said Trump "would have a perfectly good reason for wanting to find out what happened" if there were indications that Ukraine meddled in the 2016 presidential election.

However, Kent told the comittee he was "alarmed" by Trump lawyer Rudy Giuliani's efforts "to gin up politically-motivated investigations," both because it ended up in the ouster of former US ambassador Marie Yovanovitch and because they were "infecting US engagement with Ukraine."

Kent said Giuliani's campaign was based on "false information" peddled on the Ukrainian side by "corrupt former prosecutors" who were simply seeking "to exact revenge against those who had exposed their misconduct, including US diplomats."

"In my opinion, those attacks undermined US and Ukrainian national interests and damaged our critical bilateral relationship," Kent said.

Kent added that he raised concerns in February 2015 that Hunter Biden's appointment to the board of energy company Burisma "could create the perception of a conflict of interest." But he said he "did not witness any efforts by any US official to shield Burisma from scrutiny" - and that US officials were "consistently advocating" to revive the case against the company's founder.

Taylor, the top US envoy to Ukraine told the committee that when he arrived in that country in June he "found a confusing and unusual arrangement for making US policy toward Ukraine."

"There appeared to be two channels of US policymaking and implementation, one regular and one highly irregular," Taylor told the impeachment committees meeting in public for the first time.

Taylor, a career public servant who was called out of retirement to take the post, told lawmakers in his opening statement that he stands by his earlier characterisation that "withholding security assistance in exchange for help with a domestic political campaign in the United States would be 'crazy.'"

Taylor is a crucial witness, because he was in touch with diplomats and others working on both the official and unofficial aspects of US policy toward Ukraine and its new government.

During his remarks, Taylor asked lawmakers to remember that Ukraine is under daily attack from Russia. He had visited the front line last week, on a day when one Ukrainian soldier was killed and four wounded, he said.

He laid out his growing concern last summer that Trump had soured on Ukraine and Zelensky, as Zelensky sought to get on good footing with his most important single ally and backer.

"By mid-July it was becoming clear to me that the meeting President Zelensky wanted was conditioned on the investigations of Burisma and alleged Ukrainian interference in the 2016 US elections. It was also clear that this condition was driven by the irregular policy channel I had come to understand was guided by Mr Giuliani," Taylor said, referring to the Ukrainian gas firm that had employed Hunter Biden.

"In an instant, I realised that one of the key pillars of our strong support for Ukraine was threatened. The irregular policy channel was running contrary to the goals of long-standing US policy," Taylor said.

Taylor made the statements in response to questioning from Daniel Goldman, the investigations chief for Rep. Adam Schiff, the Democratic chairman of the House Intelligence Committee.

Taylor, the top U.S. diplomat in Ukraine, said a cellphone conversation his aide overheard between another diplomat and President Donald Trump in July shows that the president cares more about investigations into Democrat Joe Biden than he does about Ukraine.

In Democrats' first public impeachment hearing, Taylor said "yes, sir" when House Intelligence Committee Chairman Adam Schiff asked him if the importance of that overheard conversation was that Trump cared more about the politically motivated probes he was requesting from Ukraine than he did about the East European ally itself.

Taylor told lawmakers that the unnamed aide had told him about the cellphone conversation he overheard between European Union Ambassador Gordan Sondland and Trump on July 26.

He said he didn't know about that call when he first testified behind closed doors Oct. 22.
Taylor said the security assistance was important not only to Ukraine but to America's own military interests. He said "it made no sense" to withhold that money and was "counterproductive to all of what we had been trying to do."

Goldman showed Taylor text messages he sent to other diplomats explaining his belief that it was "crazy" to withhold the military aid for political gain.

Walker said detailed notes he took about what he saw as irregular policy in Ukraine may be provided to Congress "sooner or later."

He says the notes "may be coming" even though the State Department has so far defied a subpoena to provide documents related to President Donald Trump's dealings with Ukraine.

Dan Goldman, chief of investigations for the House intelligence panel, responded that they would "welcome" those notes.

Taylor has said that he based his testimony about concerns over the policy on detailed notes, including notepads he kept at his desk and in his pocket. But Trump has directed federal agencies not to cooperate with the impeachment investigation, and Secretary of State Mike Pompeo has said he won't provide the documents.

Earlier, as the hearing began, several Republicans on the House Intelligence Committee sought to delay the hearing by focusing on the identity of the whistleblower whose complaint sparked the impeachment probe.

Rep. K. Michael Conaway, R-Texas, made a motion to subpoena the whistleblower. After a back-and-forth, Schiff responded that the motion will be suspended until after Wednesday's witnesses testify.

Rep. Jim Jordan, R-Ohio, claimed that Schiff is the only lawmaker who knows the identity of the whistleblower - a statement Schiff immediately disputed.

"I do not know the identity of the whistleblower, and I am determined to make sure that identity is protected," he said. 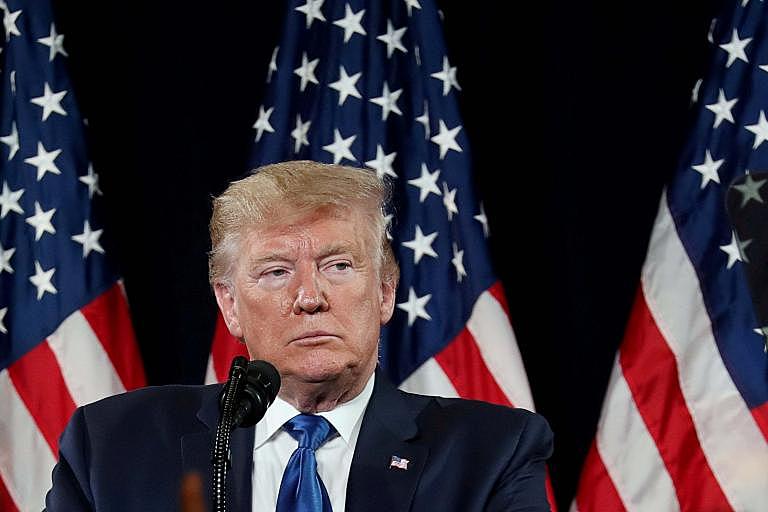 Donald Trump impeachment hearing time: Could the US President be removed from office? Can I watch the inquiry live?
Today marks an historic moment in American politics, with a hearing in the impeachment inquiry against Donald Trump to be…

Evening Standard
One subscription that gives you access to news from hundreds of sites
'History in the making': Politics junkies get their fix as live impeachment hearings begin

He claims he did not watch 'one minute' of testimony

The American public finally got a front row seat.

Washington (AFP) - The top US diplomat in Ukraine, in gripping public testimony at the historic impeachment hearing into President…