Impeachment hearings go public with a flurry of pomp, drama and tension

By Lauren Gambino in Washington

Shortly after 10am on Wednesday, a single sharp rap of the gavel launched the House intelligence committee’s first public hearing into the impeachment of Donald Trump, the 45th president of the United States.

In the vaulted chambers of the ways and means committee, the House’s grandest and most ornate meeting room, the day’s witnesses – William Taylor, the top American diplomat in Ukraine, and George Kent, a senior state department official in charge of Ukraine policy – rose to their feet and solemnly raised their right hands to be sworn in.

“There are few actions as consequential as the impeachment of a president,” Schiff said. “While the Founders did not intend that impeachment be employed for mere differences over policy, they also made impeachment a constitutional process that the Congress must utilize when necessary.”

For Democrats, the hearing was their first opportunity to make their case to the American people that Trump had used the power of the presidency to exploit a foreign government for help against domestic political rivals. Republicans saw themselves as Trump’s defenders, injecting unfounded theories and wild accusations to distract from the mounting evidence of wrongdoing by the president.

But Trump’s fate will not be decided inside the columned walls of room 1100 of the House Longworth building. Rather, it will depend on whether Democrats can pierce the deep political polarization that has cleaved the country and defined Trump’s presidency. This, they believe, is their best chance to break through the partisan echo chambers and capture the nation’s attention, as happened during the impeachment hearings of Bill Clinton and Richard Nixon.

Roughly 48% of Americans say they support impeachment in one form or another, according to FiveThirtyEight’s impeachment polling tracker, while 44.4% say they do not support it. But all participating in the Capitol Hill drama on Wednesday were keenly aware that open hearings have the power to sway public sentiment: support for the impeachment of Richard Nixon climbed quickly, Pew Research has noted, after the process was televised and many Americans learned about the case in detail for the first time.

“This is a very serious event in our country,” the House speaker, Nancy Pelosi, told her caucus, like a general steeling her troops for battle. “We wish it could have been avoided. None of us came here to impeach a president.”

The more than five-hour spectacle was at once dramatic and tedious – startling new testimony followed by long bouts of rote questioning.

Taylor, a Vietnam war veteran with a voice that observers agreed sounded like late broadcasting legend Walter Cronkite, was unflappable and measured as lawmakers tried to goad him into making a political statement. He smiled, occasionally laughed, and rejected the assertion that he was a “star witness”: “I’m not here to take one side or the other or to advocate any particular outcome.”

Early in the questioning, Daniel Goldman, a former federal prosecutor who asked questions of the witnesses on behalf of the Democratic chairman, asked Taylor: “In your decades of military service and diplomatic service representing the United States around the world, have you ever seen another example of foreign aid conditioned on the personal or political interests of the president of the United States?”

Taylor shook his head. “No, Mr Goldman, I have not.”

In a later exchange, the Republicans’ congressional investigator, Steve Castor, peppered Taylor with questions about Rudy Giuliani’s role in shaping American foreign policy with Ukraine, asked: “In fairness, this irregular channel ... isn’t as outlandish as it could be, correct?”

“It’s not as outlandish as it could be,” Taylor chuckled. “I agree.”

The hearing room was icy cold, and as the hours ticked by, reporters pulled on winter coats and scarves. Lawmakers not on the intelligence committee filtered in and out of the hearing room, taking notes and documenting the scene on their camera phones. Republicans occasionally scoffed when Schiff spoke.

Devin Nunes, a Republican from California and a close ally of Trump, was not as reserved. Angry and conspiratorial, the committee’s ranking member accused Democrats of a pursuing a “scorched-earth war” against Trump and called the investigation a “carefully orchestrated media smear campaign”.

Behind him, a trio of placards, positioned behind the dais and hoisted high enough to appear in any viewfinder any time a Republican spoke, clashed with the stately backdrop. An out-of-context quote from a Democrat, a tweet from the whistleblower’s attorney and an accusation that the chairman dismissed as patently false were par for the course in a climate of unrestrained political warfare.

The Democrats strained to show that they understood the gravity of their task, modeled by Schiff, who sat ramrod straight with a gaze fixed on the witnesses. Republicans tried a different tack, at times appearing to play more to the cameras in the room than the witnesses who were present to answer their questions.

Following a sober line of questioning from Democrats, the Republican congressman Jim Jordan, one of Trump’s most ferocious attack dogs, who was just added to the committee, jolted the room by unleashing a litany of grievances that he correctly assumed would boomerang across conservative media later that evening.

“The American people see through all this,” he said. “They understand this process is unfair. And they see through the whole darn sham.” In a later monologue, he demanded that the whistleblower, whose explosive complaint touched off the impeachment investigation, testify despite his desire to remain anonymous.

“Why don’t we get the person who started this whole thing on the stand?” Jordan raged.

“I’d be glad to have the person who started it all come in and testify,” the Democratic congressman Peter Welch replied. “President Trump is welcome to take a seat right there.”

Democrats left the day’s hearing with a sense of optimism. Taylor had offered a crisp and clear accounting of what he described as the administration’s “highly irregular” approach to foreign policy in Ukraine. In his testimony, Taylor revealed a new episode that he said showed the president cared more about investigating his political rival Joe Biden than the fate of Ukraine.

Republicans, likewise, believed they had succeeded in poking holes in the Democrats’ case by undermining the witness’ accounts as hearsay.

Across Pennsylvania Avenue, Trump spent the day on Twitter, sharing sympathetic comments from allies and supporters, though he said he was “too busy” to tune in for the .

In a pronouncement that might have come from the former reality star himself, the White House press secretary, Stephanie Grisham, declared the first day of public hearings “boring”.

But Wednesday was only the opening act. Over the next 10 days, a parade of witnesses are expected to come forward to testify in public proceedings that carry the risk of unraveling a presidency which is anything but boring. 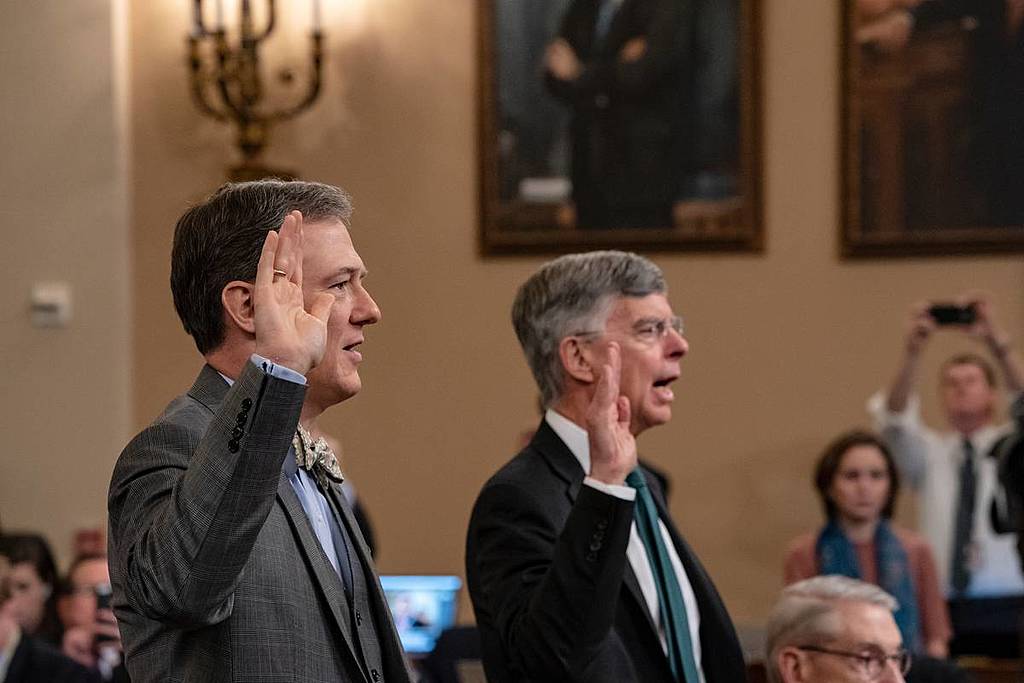 Live: Impeachment hearings underway: Trump calls it the 'greatest scam" US political history
Key points:• US President says he's too busy with other matters and isn't watching the hearing• Launches a scathing video…

The New Zealand Herald
One subscription that gives you access to news from hundreds of sites
Impeachment news roundup: Nov. 14

The Guardian - US
One subscription that gives you access to news from hundreds of sites
Impeachment news roundup: Nov. 13