IMF Chief faces even tougher challenges after saving her job 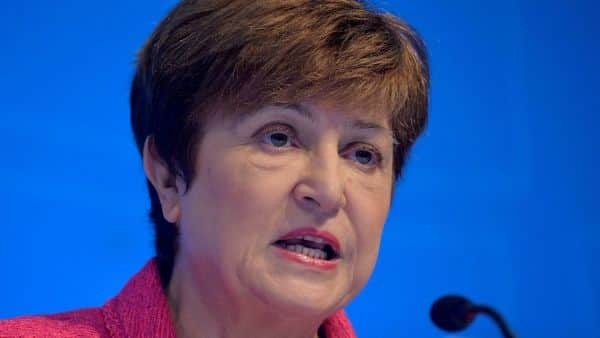 Kristalina Georgieva held on to her job as head of the International Monetary Fund. Now she faces the potentially bigger challenge of saving the institution’s credibility.

Late Monday, the IMF board affirmed its “full confidence" in Georgieva after deliberating over a law firm’s audit accusing her of pressuring subordinates at the World Bank to adjust a report in China’s favor in 2017. Minutes later, the U.S. Treasury took a sharply different tone: While the allegations didn’t warrant Georgieva’s removal, the law firm’s report “raised legitimate issues and concerns," and the U.S. urged steps to “reinforce data integrity and credibility at the IMF."

The board’s decision to keep Georgieva, 68, came as finance ministers and central bankers from around the world gathered in Washington for the first in-person IMF and World Bank meetings since the pandemic began.

“Public trust in international financial institutions has eroded, given the perception that technocratic excellence has been overruled by politics," Mark Sobel, a former U.S. Treasury official who also represented the country at the IMF, wrote in a blog post Tuesday for the Official Monetary and Financial Institutions Forum.

Here are three credibility challenges hanging over the lenders -- formed in the aftermath of World War II -- in the wake of the Georgieva scandal:

The law firm’s audit -- along with subsequent investigations by Bloomberg News -- exposed an uncomfortable truth for the fund and World Bank: its data and conclusions in research reports are often subject behind the scenes to intense lobbying by governments and close questioning by top management.

That showed politics are intertwined with the institutions’ role as an honest broker of detailed information about individual countries and the global economy. It’s not a shock to people involved with the lenders, “but damage has been done and many will doubt the institutions’ technocratic qualities, at least for now," Sobel wrote.

Though the World Bank has now discontinued the “Doing Business" report that was the subject of the probe, research and analysis by the bank and IMF are likely to get extra scrutiny, particularly anything dealing with China. That adds pressure on Georgieva and World Bank President David Malpass to ensure that such reports and advice can be trusted.

“Countries always come and want to get a hearing about why their numbers are unfair, why they should be described a little bit more favorably," former World Bank chief economist Paul Romer said on Bloomberg Television. Researchers need to “be very clear: We report what’s true, we don’t change what’s true."

IMF Chief Economist Gita Gopinath said in an interview with Bloomberg Television on Tuesday that the integrity of the organization’s data is paramount and that she is confident in its processes.

“We place an incredible amount of importance on data integrity at the IMF," she said. “We have many checks and balances -- multiple departments, multiple economies reviewing our data forecasts, so I feel good about where we are."

Georgieva faces a tangle of difficulties with calls to reduce European influence at the IMF, the need to calm tensions with the Biden administration over the scandal and meeting China’s expectation that its growing economy warrants a bigger share of voting rights.

Sobel suggested that the U.S. and Europe this week “commit to ending the duopoly" on the top jobs at the World Bank at the IMF, opening them up to respected candidates from Asia and emerging markets.

Meanwhile, the scandal has made an already-tricky task even tougher: getting the U.S. Congress to potentially approve in the coming years changes that would give China and other emerging markets more influence at the IMF. The last time such changes in voting rights happened in 2015, lawmakers imposed conditions including ensuring that the IMF didn’t relax standards on certain loans.

The administration “caved to pressure from other countries who want to sweep this scandal under the rug," said North Carolina Representative Patrick McHenry, the top GOP representative on the House Financial Services Committee. That “will affect Congress’s deliberations on the IMF for years to come."

Georgieva has work cut out for her to regain the confidence of many of the IMF’s 2,700 employees, according to people familiar with the fund, who asked not to be identified because they weren’t authorized to speak publicly.

Some IMF economists are concerned that they may have a harder time convincing countries to accept the fund’s policy recommendations and conditions that are often prerequisites for receiving loans if the borrowers perceive that data and analysis are negotiable, the people said.

IMF spokesman Gerry Rice said that Fund employees are focused on how to best serve the fund’s 190 member countries and help them recover from the pandemic.

“The challenges facing the global economy are unprecedented and we are stepping up in an unprecedented way -- with our financial resources, analytical strength, and technical assistance," Rice said in an emailed response to questions. “We’re giving it all we’ve got."