If God is neither male nor female, should we change God's pronouns?

"God called the light Day, and the darkness he called Night. And there was evening and there was morning, the first day."

At first glance, there's nothing controversial about this passage, which many will recognise as Genesis 1:5 from the Bible's Old Testament.

It is, however, the first time that the Bible refers to God as "he".

The use of exclusively masculine language to refer to God is a point of contention for many Christians, including Dr Dorothy Lee, an Anglican priest and Steward Research Professor of New Testament at Trinity College Theological School in the University of Divinity.

Dr Lee says using he/him to refer to God is an "unthinking hangover" from a past where the patriarchy was unquestioned.

While "in some cases, it might be a stubborn insistence that that’s the way the Bible speaks … no Christian could ever claim that God is male," she says.

Searching for an alternative

Some propose using she/her as an alternative to he/him, however Dr Lee says this "leaves us in the same bind."

She is more accepting of "Godself", a gender-neutral neologism replacing "God himself" that has gained a following in recent years.

Dr Lee is happy to refer to the Father, Son and Holy Spirit, which she recognises as "symbolic language" rather than a literal description of God as a man.

God, the Bible and gender

Others are happy with linguistic conventions remaining as they are.

Dr Michael Stead, the Anglican Bishop of South Sydney, agrees with Dr Lee that God is neither male nor female.

However, Dr Stead believes we should refer to God as he and him on the basis that Jesus came to us as the Son of God and gave us the Lord's Prayer, which begins with "Our Father".

Dr Stead acknowledges that describing God as Heavenly Father is problematic for those whose earthly fathers have been a source of pain.

However, he believes using non-gendered language puts God at a distance, when "the essence of what it is to be Christian is to have a personal relationship with God".

When we depersonalise God, he says, "God just ends up being a kind of cosmic plot-maker that built the universe and wound it up and let it run out – not the loving Heavenly Father that we come to in our time of need.

"It's really important for our ongoing spirituality that we have that personal relationship."

The push to avoid referring to God in exclusively masculine terms is not an abstract theological debate but one that has engaged lay people for decades.

Woman and Man: One in Christ Jesus, a report presented to the Plenary Meeting of the Australian Catholic Bishops Conference in 1999, looked at the role of women in the Catholic Church.

Many women voiced their disillusionment with what they saw as the "sexist language" of the liturgy.

"Women and girls are being denied the basic human right of having their very existence acknowledged and their being made in the likeness and image of God celebrated," wrote one woman from Queensland.

Elevating the image of God as a male parent "creates a Church which is unable to accept fully the gifts of women or celebrate their experiences of God," wrote another woman from Melbourne.

Dr Lee sees the issue of gendered language in the Bible and liturgy as part of a wider problem with women's role in Christian churches.

"It perpetuates the image of a male God who is served by male priests with male leaders and male declarations," she says. "It confirms a patriarchal church."

While it may seem like a technicality, Dr Lee says apportioning masculine pronouns to God reflects sexist attitudes held by many in religious organisations.

"Male leaders confirm that God is male, and therefore female and femaleness is an aberration. We're second-class citizens at best, if citizens at all," she says.

Dr Lee would like to see greater gender equality in religious leadership and the liturgy.

"Women need to be admitted to holy orders … and to lay leadership as well," she says.

"The more we move towards the equality and mutuality of women and men, the more it stands out when the Church refuses to admit women to positions of authority and power in the ministry."

Your information is being handled in accordance with the ABC Privacy Collection Statement.
Sign up to read this article

The Conversation
One subscription that gives you access to news from hundreds of sites
After leak, religious rift over legal abortion on display 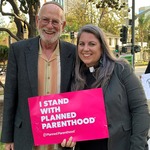 The leaked U.S. Supreme Court draft opinion that could end or limit abortion access for millions has sent shockwaves through…

What’s behind the prime minister’s lack of popularity with women? It could be his history of sexist and patronising comments.