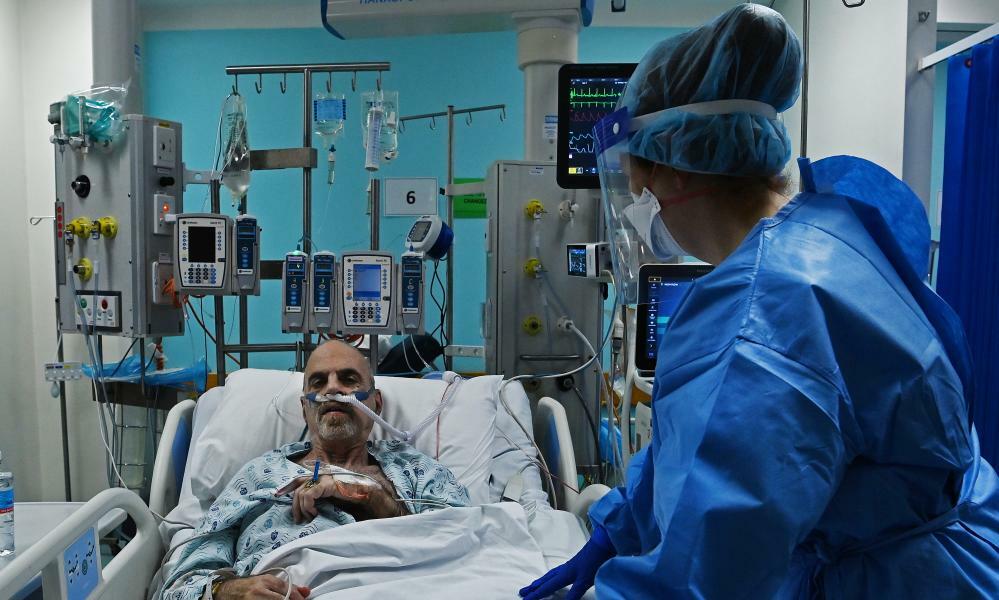 Intensive care doctors will ask the commonwealth to consider a national plan to fly ICU specialists into Sydney from interstate in the event that pressure on the New South Wales hospital system worsens in coming weeks.

Dr Anthony Holley, president of the Australian and New Zealand Intensive Care Society (Anzics), will raise the concept when he and other members of a critical care advisory group meet with the chief medical officer Paul Kelly on Thursday.

Alison Hodak, president of the Australian College of Critical Care Nurses, who also sits on the advisory group, believes a plan to source highly trained nurses from other states should be explored, with the group “incredibly concerned” by the idea of abandoning nurse-to-patient ratios floated by the NSW government on Monday.

Holley believes that because intensive care specialists are registered with the same national body, one of the main issues experts should now be considering is how credentialing – the process of a hospital verifying workers’ qualifications – could be sped up and completed “relatively rapidly”, even within one day.

Special quarantine arrangements for travelling specialists will have to be considered, said both Holley and Hodak, and plans will need to be made for how doctors and nurses’ existing workloads at their current hospitals will be met.

Discussion about such a plan follows an open letter signed by about 500 ICU nurses warning the system is in crisis and calling on the NSW premier, Gladys Berejiklian, to guarantee staff-to-patient ratios would be preserved.

The letter was responding to the NSW government announcing a plan to place overflow ICU beds in operating theatres and abandon existing staff-to-patient ratios to cope with a predicted peak of about 950 ICU beds occupied in early November, according to modelling released on Monday.

Holley stressed that current ICU pressures do not warrant redeploying specialists interstate, but said such a plan “is something we should be discussing” now in the event the measure becomes necessary in coming weeks.

“Intensive care is a relatively small workforce, there’s probably only a thousand of us across Australia and New Zealand.

“If it came to it, there would be capacity in Australia for specialists to be redeployed to Sydney.”

Holley said pressure would have to reach an extreme level for a national redeployment of ICU specialists to occur, but if the situation worsened so that staff couldn’t care for all patients, “rather than letting people die, we could send specialists to NSW to help”.

Hodak said she was sceptical about whether other states would allow their ICU nurses to leave their public health systems, noting ICU nurse numbers in most states were already strained because of the international border closure.

But Hodak said the ACCCN is “very much against” talk of diluting ratios to a point where a ventilated patient doesn’t have at least one nurse’s constant attention.

“We’d be incredibly concerned if those ratios were not maintained … You need to be managing the ventilated patients at the 1:1 ratio. Anything outside of that starts to compromise patients’ care and what we’ve seen from overseas is you start to see mortality rise.”

Hodak is also cautious of NSW’s plan to use non-ICU trained nurses within the state to boost numbers in ICU units, and said “we need a good plan to find already trained critical care nurses who are at the level of experience you need, and getting skilled nurses from another state is somewhere we can draw on”.

“ICU nurses are specially trained and it’s not something that can be done very quickly.”

She was confident that border restrictions would allow an exemption for in-demand ICU nurses, and that plans for how they would quarantine and live in NSW should be considered now.

“Is now the time to have these discussions? Absolutely … we need to give consideration about quarantine needs, and how we could support nurses when they’re staying and working in NSW,” Hodak said.

Holley said fellow ICU specialists had already spoken internally about such a plan, and that despite current ICU pressure in NSW being manageable, he thinks “we should be discussing this now in terms of a national plan”.

“Say you took staff from Queensland, you’ve got to take them away from their day-to-day job, so there would need to be a plan for how to pick up their slack, and no doubt how to quarantine them in Sydney and when coming back,” Holley said.

“We’ve already spoken about it and it’s a potential option under dire conditions.”

He said such a plan would be easier than potentially transferring patients interstate, and that if such a redeployment was possible to help NSW, it could be mimicked if outbreaks warrant extra help in other states.

Before the NSW surge plan was released on Monday, private hospital workforce and bed capacity had already been incorporated into the public Covid response, and recently retired nurses were being recalled and other lower-qualified nurses upskilled for ICU work.

ICU nurses who spoke to Guardian Australia warned nurse-to-patient ratios in non-Covid ICUs were not being met throughout August, and reported increasing sedative doses for some patients in order to manage nurses’ workload.

Do you know more about ICU and hospital pressure in NSW? Contact elias.visontay@theguardian.com.