Iconic Livingston Skatepark could get a facelift to mark 40th anniversary 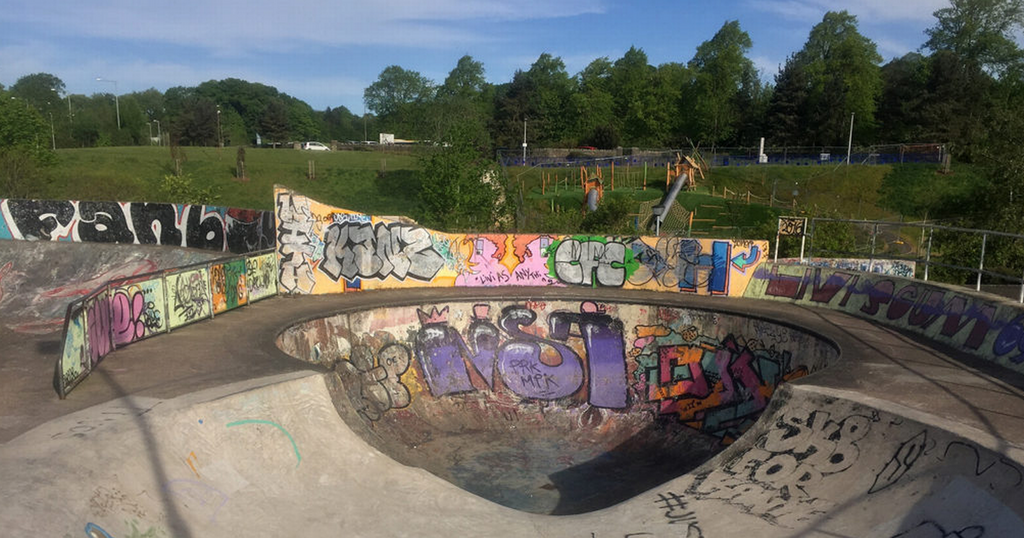 In the year skateboarding entered the Olympics, a campaign has been launched to give the iconic Livingston skatepark a makeover to mark its 40th anniversary.

Calls have been made for the landmark to get a facelift as well as giving it the recognition it deserves for its pioneering role in the sport.

Since being built in 1981, it has achieved international status, attracting skating stars such as Steve Caballero, Mike McGill and even Tony Hawk who made the journey to Livingston to ride its famous bowl.

The skatepark was one of the first built in Scotland by the former Livingston Development Corporation. A nationwide craze for skateboarding was starting to wane so it was considered a bold move.

Livingston skatepark opened in 1981, at a time when most commercial skateparks were closing and it became one of the most important facilities in Britain during a critical period in the development of skateboarding.

In the sport it is considered a good example of a free, unsupervised facility which has achieved international status. The skatepark was extended during the 1990s with the addition of some smaller bowls. A further extension was added in 2013 adding a fullpipe, pools, square bowl and a new smaller street / beginners area.

Livingston South councillor, Moira Shemilt, raised a motion calling for the skatepark to undergo a revamp.

And councillors across the chamber backed the motion raised at a meeting of West Lothian Council to draw up long term plans for the restoration and preservation of the skate park and the potential for investigating historic status to raise the profile of the venue which has drawn young and old from across the county and Scotland since 1981.

Councillor Shemilt described the skatepark as “a jewel in the crown of Livingston”.

She continued: “Those who used it in its heyday are now bringing their children and grandchildren to skate on the soaring, curving concrete.

“It is one of the jewels in the Livingston crown. However, it is also one which has been prey to the elements and in drastic need of some conservation and restoration as well as improvement, in order to restore it to an international standard.”

The motion called for the council to build on the work already initiated by the council’s CLD Youth Services and Community Regeneration Officers, consolidating and expanding the present focus group of skatepark users.

It suggested the council draw up a plan for the longer-term conservation, restoration and improvement of the skatepark, considering the views of all stakeholders and recognising good practice in skatepark design such as in Inverness, and provide approximate costs for the implementation of a longer-term conservation, restoration and improvement plan.

Crucially the motion called for the investigation of the possibilities of historic status for the park. Councillor Frank Anderson, depute group leader of the SNP said historic status could “ provide the keys to open doors to funding”.

“The skatepark is in the DNA of Livingston. It belongs to everyone in Livingston and West Lothian. It’s an opportunity to create an outdoor space that can be used by everyone.”

Hannah Bardell MP added: “It would be great to see our much loved skatepark achieve historical status.

“This much needed conservation and improvement plan will ensure that the skate park will receive the recognition it deserves and place it firmly on the map for skating enthusiasts around the world.”

Skater and park user Alice McMillan (10) said she would like to see changes at the park.

She said: “I think that the skate park isn't too safe as it has big cracks in the ground that lots of people trip over but it's still super fun!.”

“I like the skatepark because it's huge and there are ramps for beginners and for professionals, and it has big bowls and small bowls.”

Fellow skater and park user Lucy Jo Shemilt (8), added: “What I love about Livingston skate park is that it’s nice and big so everyone who likes to go can enjoy a little space.”

“Maybe we could make it a little wider near the mole hill so more people can have space.”