Ian Holloway: Joey Barton has created an almost impossible job for himself at Bristol Rovers 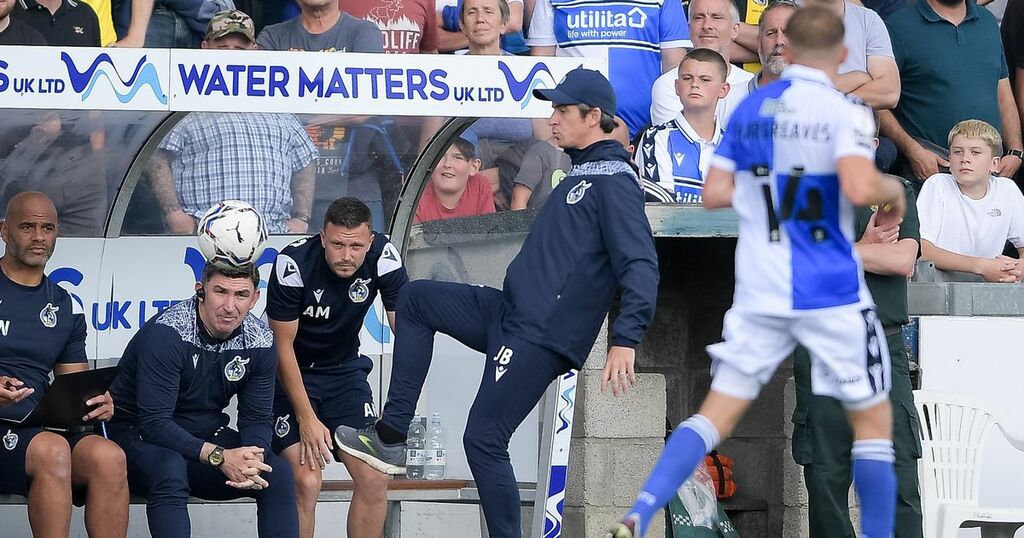 Joey Barton faces the task of turning a huge influx of new recruits into a crack regiment if Bristol Rovers are to emerge from the many lost battles of recent seasons.

It cannot be done overnight and will require supporters to show a higher degree of patience and willingness to ignore setbacks than is normally the case in the modern game.

Seventeen new signings and more than 20 departures since the end of last season is horrifying in some ways. But I totally back Joey’s decision to make such sweeping changes because a rot had set in that had to be eradicated.

The manager’s job had been handed around like pass the parcel since Darrell Clarke left and, unfortunately for Joey, he was the one holding the package when it exploded.

A group of players the club put their faith in had proved themselves unworthy of it, not just in terms of results, but in some of the things Joey found happening on the training ground when he first arrived.

They were well documented and I am sure played a major role in his decision to create a new squad. Now comes the job of drilling the newcomers into a successful unit.

That can only be done through hour upon hour of hard work. By watching his players train, Joey will start to discover who are the leaders and who are the followers.

You don't want too many leaders in a team because it creates arguments. That was famously the case with the brilliant Holland side of the 1970s, packed with brilliant individuals, but unable to win a tournament.

The players were forever arguing with the coaches and each other. The ideal is to have several potential captains, whose knowledge and experience rubs off on the younger members of the squad.

In that respect, I find Joey’s signing of Leon Clarke and Brett Pitman, at the ages of 36 and 33 respectively, particularly interesting and encouraging.

It’s not just that the pair share more than 300 league goals. They know the game inside out and can help the fresher faces in the squad handle a pressure many of them will never have encountered - playing in front of 8,000-strong home crowds.

They don’t necessarily have to be role models in every respect. Some of the best strikers I played with or managed were poor trainers.

What the likes of Clarke and Pitman can do at this stage of their careers is offer timely words of advice on the pitch, helping the less experienced lads to manage game situations.

Both will score goals, given the right service, and that has been a problem for Rovers since Graham Coughlan pulled off a miracle in signing Jonson Clarke-Harris.

I believe Coughlan quit as manager because he knew his star recruit was going to be sold. Since then Rovers have placed responsibility for finding the back of the net largely in the hands of rookies.

Clarke and Pitman have not been signed as investments, but rather to get goals immediately. And fair play to the board for financing the wages of two senior guys with their track records.

At the moment the Rovers players are strangers to one another. They need time to learn about each other’s game and Joey needs a period to assess them.

He will finding out about individuals at every training session, seeing who wants the ball and which of them demonstrate leadership qualities.

His reputation is now firmly on the line. When you inherit a losing team, you can point the finger at numerous other people, but there comes a time when it is your side and your responsibility.

It is not fair to judge the new-look Rovers yet and I would settle for this season being one of progress towards success in 2022-23.

Joey has taken drastic measures and it means a massive test of his managerial skills. He didn’t like the attitude he found in the dressing room when he joined the club and now has to rekindle the sort of spirit Rovers have been renowned for over much of their history.

The players all have to buy into that. When you make so many signings in a short period, it is not realistic to expect all of them to succeed, but if 75 per cent of them work out the club will be better for it.

What the fans must do is accentuate every positive, giving the new men a fair chance to produce their best and wear the blue and white quarters with pride.

One of the hardest things to teach a new group is how to work off the ball, both individually and as a collective, to become a strong defensive outfit.

It’s not just about tactics and buying into how Joey wants to play. It is understanding the sort of runs a team-mate makes and how to move yourself to cover and support him.

If you look at Chelsea since Thomas Tuchel took charge, the way they work together on closing down opponents when they don’t have the ball is fantastic.

That comes about from repeating training drills, holding meetings and watching film of how other top teams operate as a unit.

From an attacking perspective, there has to be constant work on set-pieces, which are so important to scoring goals. All of this requires time to perfect.

The longer Joey has to work with his recruits, the better they are going to become. What’s vital is that supporters avoid a knee-jerk reaction to poor results and recognise that the manager is not a magician.

I say well done to him for pinning his colours to the mast and having the courage to start afresh.

In doing so, he has created an almost impossible job for himself. But he is a competitor by nature, will relish the challenge, and with the right backing can make things possible.

Anyone watching England’s game in Poland this week will have seen how home fans can keep their side going right to the final whistle and achieve an unlikely result.

Let’s see that same desire and passion at the Memorial Stadium this season. I can’t stress too much what a difference it can make.