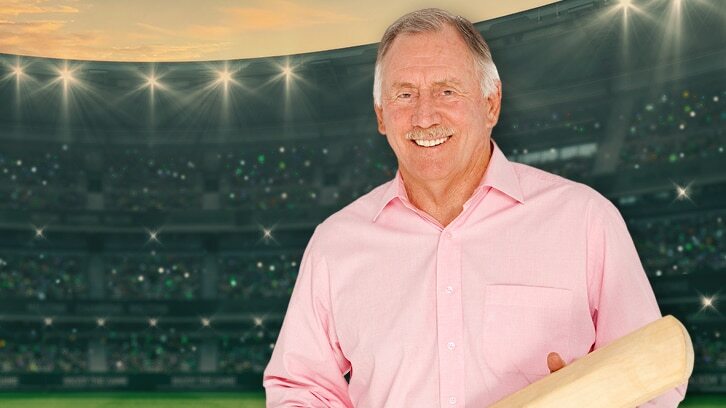 With Australia's one-off Test match against Afghanistan in Hobart facing an indefinite postponement following reports of the Taliban banning women from playing cricket, Ian Chappell felt the need to act.

The former Australian captain is leading a virtual fundraising campaign, encouraging Australians to go into bat for Afghanistan.

"The idea came about from the disappointment of the [Hobart] Test match likely being cancelled," Chappell said.

The Batting for Afghanistan appeal invites fans to buy a virtual cricket bat and support the UN Refugee Agency's work in the troubled country.

The campaign offers the opportunity to acquire memorabilia, including a signed shirt from the Australian women's cricket team, and Zoom chats with former players Lisa Sthalekar and Mel Jones.

The auction also provides fans a chance to discuss iconic cricketing moments, such as Shane Warne's infamous "ball of the century", with the legendary spinner himself.

Chappell has enlisted the support of other cricketing greats such as Viv Richards, Dennis Lillee and Rod Marsh.

The money raised will go towards providing food, water and emergency shelter and will help build new schools and health clinics across Afghanistan.

"More importantly, the UNHCR has had contact with the Taliban, so there's communication between the two bodies."

The humanitarian crisis is growing

According to the UNHCR national director for Australia, Naomi Steer, more than 3.5 million Afghans are displaced internally, with 635,000 – mostly women and children — having fled their homes this year.

"They're now facing a terrible winter of conflict and COVID-19," Ms Steer said.

According to the World Health Organization (WHO), COVID-19 testing and vaccination rates in Afghanistan have declined since the Taliban's takeover two months ago.

Around 1.6 million doses of the vaccine will expire if it isn't used soon.

Fears for cricket's future in Afghanistan

The dire humanitarian situation isn't the only thing that saddens Chappell; he fears for the future of representative cricket in Afghanistan.

The International Cricket Council (ICC) stipulates that any international Test-playing nation must have a men's and women's team.

Despite the Afghan men's team currently preparing for the T20 World Cup, which starts next week in the UAE, the long-term representative careers of spin stars Rashid Khan and Mujeeb Ur Rahman could also be impacted.

The pair are currently ranked first and second respectively in the ICC T20 bowling rankings.

"I've got a lot of admiration for the way they play cricket," Chappell said.

Khan also plays for the Adelaide Strikers in the Big Bash League.

The 23-year-old is supporting the Batting for Afghanistan appeal by providing a signed shirt.

Chappell still recalls meeting some of Afghanistan's first international cricketers at the 2010 T20 World Cup in the Caribbean.

"None of them had ever left the country or been on a plane but they went on the field to play and not just make up the numbers," he said.

To buy a bat or bid online, go to www.BattingForAfghanistan.org.au.