It's not often that you see patrons of a restaurant eating sand from a fake beach and sniffing each other's rear ends, but this is business as usual for Alfie's Island Café. Located on a large site in Timperley, the dog-friendly space is the creation of husband-and-wife duo Tony and Tania Golden - former owners of Central Bark Café.

The couple, originally from the United States, have taken what was formerly the Manor Farm and transformed it into a community hub for both humans and their four-legged friends. The pair also work with Starlight Barking Trust to bring strays over from Greece - where there are charities and facilities to care for and rehome dogs - and help them to find the dog’s forever home in the UK.

I’ve always felt a bit sorry for pets when their owner goes off on holiday and they get shipped off to the kennels. Rather sweetly, this café has its own beach and a décor inspired by more tropical climes than south Manchester - complete with deck chairs and parasols for dogs to sit back and enjoy their own staycation.

READ MORE: 'I tried the burger from a Greater Manchester petrol station that's a hit on social media'

So far, so good you might think, but here reader is where I tell you about how it went down when I took our family’s adolescent black lab for a trip to Alfie's. I don’t have children, but I imagine taking a dog to a dog café is similar to how parents feel taking small children to a restaurant - for the love of god, please just sit down, and so on.

I used to work as a waitress and would sometimes lock eyes with sleep-deprived customers, crawling around on the floor, desperately picking up discarded hula hoops and wet wipes that their children had left in their wake - I feared a similar fate awaited me. Needless to say, anxiety levels in camp were high.

Dragged through the front door and safety gate of the café by the overly excited lab, we’re greeted by the dog of the hour, Alfie, the couple’s Greek Golden Retriever, who up to a couple of years ago could only respond to commands in Greek. Just like our dog I’m nervously scanning the space, looking for potential triggers, but to be fair the cafe’s own dogs - who run up to meet us - are a lovely bunch. It’s only a little terrier - small dog syndrome alert - who’s barking at us. It's a clear pup power play.

Sidestepping the terrier we try and coax our lab over to a bench to get him settled, but understandably he’s pretty excited having had minimal contact with other dogs due to the pandemic. Fortunately, one of the staff members passes us a bag of popcorn, for feeding our dog and theirs, which without a moment’s contemplation he wolfs down.

There’s a lot of nice touches here. Small spades on the tables to be used on the beach, plus flower garlands, mini palm trees and a tiki-style bar. I hope the dogs appreciate the design touches. You might think the main focus here would be on the animals, it is after all a dog café, but that’s not to say that the food hasn’t been taken into consideration.

The truly massive American-influenced menu is divided between the café’s own menu and that of the Great American Smokehouse. The former features signature dishes like American-stack pancakes, sandwiches and paninis, all-day breakfast, fresh salads and ‘hit the spot’ desserts.

We’re a little distracted by our dog, who’s flirting with a female black lab and is eager to be let off the lead, so we quickly scan the menu and opt for two hotdogs or ‘Dawgs’ as the Great American Smokehouse likes to call them here. Eating a hot dog in a dog café feels a little wrong given the circumstances, but I’ll look past this little quirk and try not to overthink it.

There’s an astonishing amount of choice to select from though - think smoked burgers, BBQ ribs and pit master potatoes - that is if you’re not busy pleading with a dog to heel and play nice. Drinks wise, we opt for a chocolate and strawberry shake respectively, there’s some more adventurous flavours as well though, like Oreo cookie, coca cola and mocha honey coffee.

There’s also treats for your pooches, namely the Beach Dog Sampler, which comes with fresh doggie stew, homemade treats and baked goods. As much as I would love to see our dog tucking into his own gourmet lunch, he’s on a strict diet - as you may know Labradors are awful for not knowing when to stop eating, and I really don’t want to have to use the aforementioned spade.

As the food arrives we realise - as I imagine most parents do at this juncture - that the likelihood of us both eating at the same time is slim. When I finally get to my Southern Dawg I have this eerie feeling that I’m being watched - and it turns out I am. A number of dogs have congregated around the table, and while I’m used to our own giving me the whole puppy dog eyes routine, having a whole pack watch you tuck into a hot dog is slightly unnerving.

Whilst earnestly trying to avoid the gazes of several dogs, I tuck in and am pleasantly surprised by the dawg - sitting and staying well within the brioche bun, the chargrilled meat has a nice smokey finish to it and is complemented by strips of streaky bacon, coleslaw and ketchup. Accompanied by some well-seasoned sweet potato fries, it makes for a very decent lunch - and yet as I’m sure many parents know, you can’t take your eye off the ball for too long or things can escalate.

No sooner have we finished than our dog is getting a bit fidgety - I’m sure watching his fellow dogs run around the café while he’s confined to the bench is slightly frustrating, but you’re not allowed to take your own dogs off the lead and it’ll do him good to learn the hard way. He also recently ran off in a field, so he’s something of a flight risk right now.

When we walked in the atmosphere was quite relaxed, and everyone who came in - either with their own dog or just to meet some of the café’s dogs - seemed pretty happy. It’s certainly funny to watch all the dogs run to the gate as soon as they hear someone come through the door - a cacophony of barking, and in some cases, well-meaning growls. While the café team reassures punters that they’re just being friendly, it is one single clap of the hands from the owner Tony that manages to get them to disperse.

Suddenly the space is a lot busier though, and while this is definitely a slick and wholesome operation, there is something of a chaotic energy to it. One dog is eating sand - he mustn't have got the memo about the Beach Dog Sampler - while others are giving one another very little personal space, and a dog I could easily fit in one palm has conked out under the surfboard. It’s all fun and games, but we take this as our cue to leave.

At the start of all this, I compared it to taking children to a restaurant, a typically unpredictable affair, where it really could go any way and tears are not out of the realm of possibility. In reality, it really wasn’t that bad, and no tears were shed. Yes, I couldn't really enjoy the moment - or the food for that matter - but the concept is still very wholesome and genuine, and if a little bit of chaos is your thing, Alfie's is just the place. 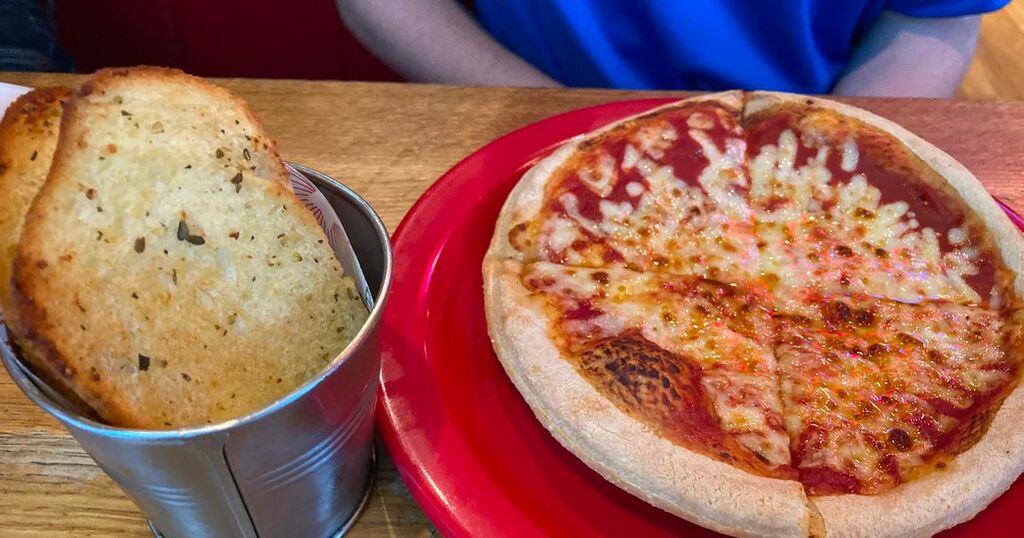 Manchester Evening News
From analysis to the latest developments in health, read the most diverse news in one place.
There's a rare chance to buy a beach hut at a stunning location in Wales

Leatherback turtles are known to migrate here in the summer months

Manchester Evening News
One place to find news on any topic, from hundreds of sites.
The best restaurants and takeaways open late at night in Greater Manchester

Time for a midnight snack