When Sean, a 17-year-old high school student who lives on the East Coast, began summer break a few months ago, he was in a bad place.

His life, he felt, was on a constant, depressing loop. Each day, he would wake up and do the same things over and over again. Eat breakfast, play video games, waste time. He felt as though he had nothing going on and was too embarrassed to take up his friends’ offers to hang out.

“I was severely depressed and lonely,” says Sean, who, like all interviewees in this article, asked to use an alias to protect his privacy. “I just wanted somebody to share some intimacy with.”

It seemed as though his prayers had been answered when Sean met a 19-year-old woman through Instagram. It didn’t take more than a few hours for their conversation to turn to sex. As their chats became heated, the pair began to exchange nudes. Eventually, Sean agreed to a video call. “It all seemed really real,” he says. “The Instagram, the texts, even the video call. It just felt real.”

“I couldn’t do anything. I was barely eating. It was really scary.”

During the video call, Sean and the woman both masturbated in front of their phone cameras. Afterward, the woman’s video feed vanished, and another clip popped up. Sean was horrified — it was a clip of him pleasuring himself. He had been recorded.

Immediately, the person who had duped Sean demanded $600 — unless he wanted to have the video leaked to his entire school. Although Sean refused to pay and immediately blocked his blackmailer, he lived in fear for weeks. “I thought my life was over,” he says. “I thought they were being serious about their threats, and they were going to try and ruin my life.” His anxiety spiked. “I couldn’t do anything,” he says. “I was barely eating. It was really scary.”

Sean is a victim of sextortion, a digital crime the FBI says is surging. The bureau’s Internet Crime Complaint Center reports that in the first seven months of 2021, it received more than 16,000 sextortion complaints, involving losses in excess of $8 million. The crime can lead to dire consequences: In separate cases this year, Ryan Last and John DeMay, both 17, died by suicide after being sextorted. (While women can also be victims of sextortion, a landmark study published in January found that men are twice as likely to be victims of sextortion than women.)

Although most victims do not take their own lives, living with the results can be damaging. Sextortion survivors say that they have issues with their mental health and interpersonal relationships. Some have fallen prey to further scams aimed at victims who want to hunt down their sextorters or keep nudes off the internet. These victims hope that by sharing their stories, they might help others to escape the same fate.

For Brian, an office worker who was sextorted after sending old nudes to a stranger from his desk at work, the whole experience felt like a nightmare. “It must have been about a minute after I sent the inappropriate photo that the threats started,” he says. “They started with a sort of collage of photos of me, with my contact information written over it in red letters. They threatened to send the compromising material to everyone I knew unless I paid them $500.”

Brian was terrified and hastily paid the ransom via CashApp — only to be asked for another $1,000. After he sent that on CashApp, too, he was asked for a further $3,000 in bitcoin. “At this point I was terrified, and in no condition to work,” says Brian. He left his office and, on the way home, decided against paying the bitcoin ransom. He blocked his sextorter, but he was still scared senseless. “That night,” he says. “I didn’t sleep a wink.”

“It’s difficult to trust people now, and I experience paranoia.”

While most victims of sextortion report the first few weeks after an attack being the hardest, many go on to suffer for months — or even years — after they have been targeted. “I don’t know when I’ll feel safe on social media again, and I feel more introverted than before it happened,” says Paul, a 15-year-old sextortion victim and high school student from the Midwest. “It makes you get into your own head about the way other people see you.”

Although Paul got away without paying, the impact of the whole saga has stayed with him. “It’s difficult to trust people now, and I experience paranoia,” he says. “Whenever I talk to someone I haven’t spoken to in a while, I feel like they know what happened.”

It’s been especially hard to deal with the people who really do know what happened: his parents. “Those relationships can only mend so much as we move on,” Paul says.

Indeed, many sextortion victims say, often the hardest part of the whole situation is navigating relationships with the people they’ve let know what happened to them.

When Gary, a married dad from California, was sextorted, he was given 24 hours to pay $9,000, unless he wanted his pictures and sexts leaked to his wife. He immediately blocked the sextorter and did not pay the ransom, but they followed through on their threat, sending pictures to Gary’s wife and many of her Instagram followers, plus Gary’s mother. Although his mom has forgiven him, he’s not sure his wife has.

Gary says he got into the whole situation to begin with because of his spouse’s disinterest in sex, but now the situation is worse than before. “I want to talk to [my wife] about sex, but I feel like the infidelity and blackmail will come up,” he says. “I feel like I can’t be completely honest with her anymore. It’s like walking on eggshells all the time.”

But interpersonal issues are not the end of the nightmare for some victims. Desperation to clear their names — and nudes — from the internet, even if their pictures haven’t been leaked, can leave them vulnerable to further scams. “There are plenty of unscrupulous actors out there that are more than willing to take advantage of victims. Companies like Digital Forensics are constantly using fear to sell their services, which do little to actually help the victim,” says Gary.

“New victims rarely have any idea what to do. They’re in a state of panic, and often dealing with tremendous fear, shame, and significant financial losses.”

Sextortion victims on Reddit often complain about Digital Forensics, which says on its website it’s “able to track down cyber criminals across the world through the use of our proprietary technology.” Critics claim the company uses scare tactics to sell its services, does little to track sextorters or recover pictures, and tries to pressure victims into spending more money when it fails to deliver on its promises. (Digital Forensics did not respond to Input’s request for comment.)

“There are also outright scammers too,” Gary says. “They come with promises of being able to help by deleting the images from the blackmailer’s device. Spoiler alert: They won’t.”

Brian thinks those who make false promises to sextortion victims should be ashamed of themselves. “New victims rarely have any idea what to do. They’re in a state of panic, and often dealing with tremendous fear, shame, and significant financial losses. It’s not uncommon for them to do something they’ll regret,” he says. “It’s usually teenagers. We’ve seen a few articles about such tragedies this year. Who knows how many lives have been lost where we never know why?”

Victims like Paul, meanwhile, think that more action should be taken by social media companies, which he feels have the power to prevent such tragedies. “I think Instagram needs a hotline for this stuff, where you can call in and tell them what happened, and they can take your friends list and filter out messages from the [sextorter’s] account — and any accounts they might create,” he says. “It is so rampant on their app. You would think they would try and do something.”

Although Sean agrees that more could be done by social media companies to support victims, right now, he just wants more people to understand how sextortion works, so they can better handle the situation should it arise.

“There are resources out there, but they need to be spread more,” he says, pointing toward platforms like Reddit, where sextortion victims swap information and provide support to each other anonymously, as well as organizations such as Cybersmile and Thorn. “Victims have a lot more power than most people think in this situation.”

Now that Sean is headed back to school again and he’s left his ordeal behind him, he’s feeling more hopeful about the future. “Maybe this was meant to happen to me to change my life,” says Sean. “I’ve started trying to be a better person. If I hadn’t been sextorted, I’d probably still be in my bedroom, living the same depressive life I was before.” 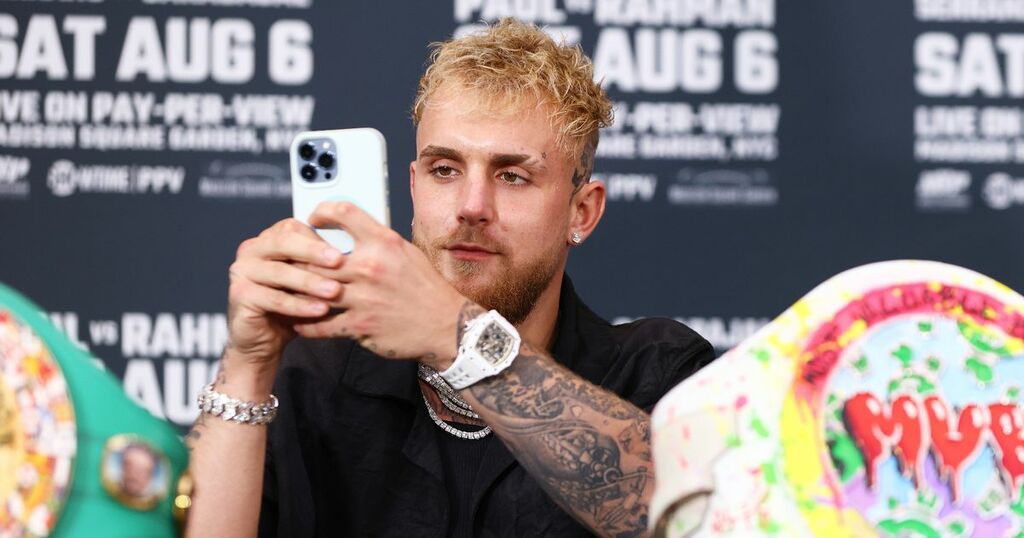 Jake Paul sent "p****" message to "fake a**" UFC star after controversial fight
YouTube star Paul was not happy when Pedro Munhoz, the No.9-ranked UFC bantamweight, claimed to be poked in the eye…

Daily Mirror
From analysis to the latest developments in health, read the most diverse news in one place.
Gemma Atkinson jokes 'I look like I s*** myself' after daughter's mishap

The down-to-earth star made a candid confession to fans

Police are working to inform the next of kin of the man, who is believed to have been in his…

Laura moved back to the UK after living in Dubai for a few years with ex Dane.

Daily Record
One place to find news on any topic, from hundreds of sites.
"I want £1,000 a month... or pictures will be posted": Twisted conman, 30, targeted women of Muslim heritage threatening to post sexual images of them online in horrific campaign