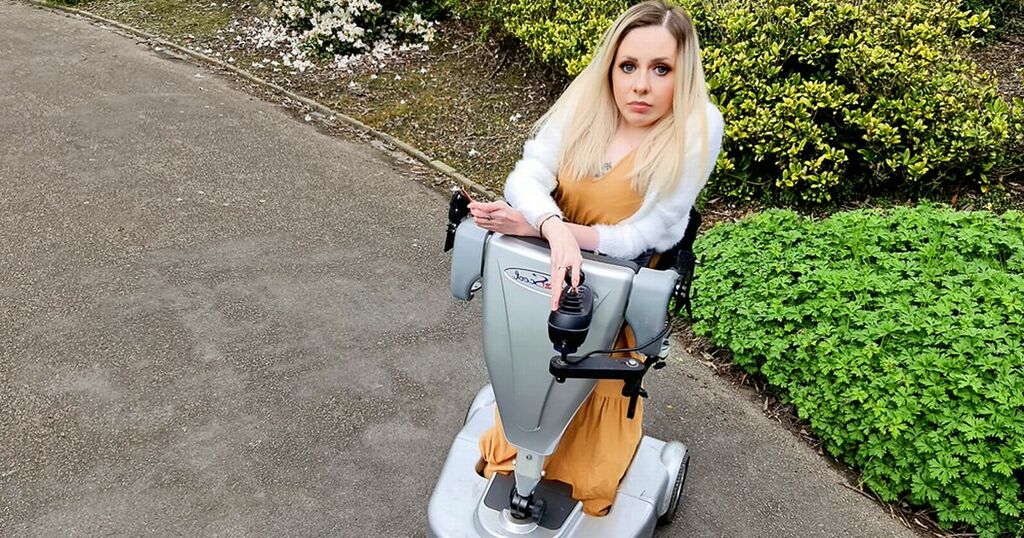 Joanna Klich, 32, last sat down when she was a toddler shortly before her hips fused to her joints making…

Joanna Klich, 32, spends up to 15 hours a day on her feet and uses a vertical wheelchair to get…

Kate Liberty, 24, from Llantrisant, tells of how she started suffering "lightening-like" pains as a teenager which turned out to…

Kate Liberty, 24, from Llantrisant, has been living with a form of arthritis since the age of 18

Ballotpedia
Kids don't vote but teachers and parents sure do – what are the parties offering on schools?

‘I still have dreams’: Woman who ‘hasn’t sat down’ for 30 years fears her legs will ‘fail at any moment’

A woman who has not sat down in 30 years because of a debilitating condition which has fused her hips to their joints is terrified her legs will “fail at any moment” making it impossible for her to stand.

Desperate to start specialist physiotherapy costing thousands of pounds, Joanna Klich, 32, last sat down as a toddler, but only remembers a life of standing or lying down, due to a rare genetic condition loosely diagnosed as spinal muscular atrophy, which weakens muscles and impairs movement, as well as central core disease, which does the same.

Despite her limitations, until she was 21, Joanna  – who experiences daily pain -recalls living a “normal life,” studying and working in her hometown in Poland. But her symptoms worsened when she moved to Stoke-on-Trent, Staffordshire, with a boyfriend in 2011, where she remains and now uses a vertical wheelchair.

She added: “I need help with all my daily needs. Even when going to the toilet, I have to have a specialised toilet.

“I am in pain every day because I have no support for my bodyweight and my knees are weak.

“I feel like my left knee will break soon and then I won’t even be able to stand.

“I won’t let myself imagine what life would be like only lying down.”

Despite briefly sitting as a toddler, Joanna  – whose treatment is not available on the NHS and who has launched a GoFundMe page to raise money for her physiotherapy – has only ever known what it is like to do everything standing up.

Growing up with her mum, who is still in Poland and her father, who has now passed away, together with her two sisters in a small village, Joanna enjoyed her schooldays, at which point she only used a walker to help her move.

Joanna, who says surgery is available on the NHS for her hips, but is only available privately for her knees, said: “My mum told me I sat down as a small child, but I don’t remember that.

“From what I can remember, I couldn’t sit or walk but I could do things for myself, like go to the toilet or get up from bed.”

She added: “I would stand in class next to the school desk by my friend, but I never felt different. I had lots of friends and they never treated me any differently.

“When I grew older, I started to wish I could walk like other children, but I never minded not sitting, because to me that was normal.

“The hardest thing was when my friends would go dancing and I would have to stand and watch, because I couldn’t do it.”

After leaving school, Joanna had a job in admin for a few years, but moved to the UK when she was 21 in 2011, with her boyfriend at the time – loving the freedom of her adult life, before her condition became worse.

“Moving to England was amazing,” Joanna said.“I wasn’t at home, I was in a different country and I was independent and finally felt like an adult.

“I started a business as a nail technician, doing nails, make up and lashes.“But then I started to struggle to walk, because I was too weak and I could only stand.”

“I thought it was normal at first, because I was standing for 15 hours every day, but my condition got worse and worse.”

By 2016, Joanna had to start using a vertical wheelchair to support herself and move around, but even with this, the pain became so unbearable she had to give up work in 2019.“I couldn’t stand because of the pain and I started doing everything slowly,” she said.

“But then I would have to lie down for as long as possible.”

Now, Joanna relies on her vertical wheelchair and stand aid to be held upright – but even this is incredibly painful,  as her bodyweight presses down on her weak limbs.

Taking pain relief daily, she also needs a respirator to help her breathe at night because her lungs are weaker lying down.

One of the hardest things for Joanna – who has a loving and supportive boyfriend, personal assistant Dariusz Suchowiak, 46 – to accept has been the fact she will not have children, as her condition will make it impossible.

She said: “I can’t be a mother. I started thinking about being a mother when I was 19.”

She added: “But I know that it would be very, very difficult in my condition and I could die.

“I love children, so this is a nightmare for me.

“I accept it more now, but it still upsets me.”

Despite everything, Joanna is still trying to look to the future and is a third year psychology student,  taking a remote course run by a university in Poland.

For the last decade, she has needed assistants to help her with cleaning, cooking and basic tasks, such as going to the toilet.

“I can’t be independent,” she said. “All the time, I need someone to help me with everything.

“I always have to have someone in my home helping me,  to do everything from going to the toilet, to getting into bed. I have no privacy.”

Now, her great fear is that her legs will soon give way and she will no longer be able to stand.

For this reason, she is desperate to raise enough money for private intensive physiotherapy, which she hopes will relieve the strain on her muscles and help her to avoid any operations for as long as possible.

Surgery is risky, as it involves changing the position of the hips into a permanently seated position.

Joanna said: “Physiotherapy would make me stronger, so my muscles will be stronger and won’t make standing so difficult.

“If I can get that I won’t need the surgery yet, where there is a risk I may not survive.”

She added: “But if I was seated, I could do things normally and use both arms, because at the moment I have to use one arm to lean on things, because of the weight on my legs.”

While Joanna has no idea how much the surgery for her hips and knees would cost, she knows she will need £6,000 for the physiotherapy.

In the meantime, she has to be ultra careful and must avoid gaining weight, which would put more strain on her weakened legs.

She said: “A few years ago, I gained 10 kilos and I couldn’t stand because I felt so heavy.”

She added: “I started a diet and even losing a few kilos, I felt amazing and lost the 10 kilos soon after.”

Effectively housebound most of the time, even trips involving a car are a challenge for Joanna.

She said: “I travel in the back or in the passenger seat, lying down, because I don’t know what else to do.”

But, rather than dwelling on whether her condition is life threatening or life limiting, she is focussing on fundraising and trying to improve things.

“I didn’t feel like I was disabled until I turned 21.

“But I still have dreams.  I’d like to open a foundation for disabled people and teach psychology.”

“I also dream of one day having my own flat that I can be independent in.

“So, I want to have the physio to find some independence again and feel like I can start to fulfil my dreams.”

To donate to Joanna’s treatment, go to https://www.gofundme.com/f/joanna-k

Joanna Klich, 32, last sat down when she was a toddler shortly before her hips fused to her joints making…

Joanna Klich, 32, spends up to 15 hours a day on her feet and uses a vertical wheelchair to get…

Kate Liberty, 24, from Llantrisant, tells of how she started suffering "lightening-like" pains as a teenager which turned out to…

Kate Liberty, 24, from Llantrisant, has been living with a form of arthritis since the age of 18