I maintain a harmonious relationship with State govt., Governor 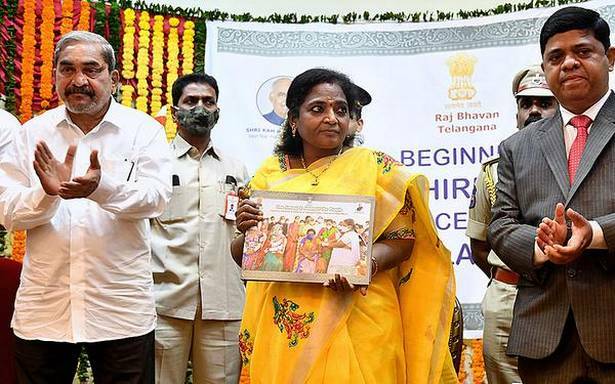 Governor Tamilisai Soundararajan said that she maintained a harmonious relationship with the State government though there were differences of opinion on certain issues.

In a media interaction after releasing her coffee table book, One among and amongst the people, to mark the completion of her two years in office, Ms. Soundararajan said she differed with the government after it refused to join the Ayushman Bharat, a national public health insurance scheme of the Centre.

“I conveyed to Chief Minister K. Chandrasekhar Rao that the implementation of the scheme by the State government will help people from other States to enjoy its benefits. He was convinced and responded positively to make it a Centre-State programme,” she said.

On her twin posts as Governor of Telangana and Lieutenant Governor of Puducherry, she said it was like handling twins, being a gynaecologist herself. When she stepped in as Governor two years back, she said she handled Telangana State as a new born baby.

She divided her presence and concentration between Telangana and Puducherry equally. She was in the Union Territory from Monday to Wednesday and here from Thursday to weekend. She said she had a hectic time because the responsibilities of Lieutenant Governor were far more than a Governor. She travelled to Puducherry and returned via Chennai every time. It took two-and-a-half hours of road journey from Chennai to Puducherry. Ms. Soundararajan said she enjoyed the responsibility that was entrusted to her. The responsibility doubled in the last six months after taking over as Lieutenant Governor. She dedicated the success of her governorship in two years to her mother who passed away recently.

She released a reprint of Telugu - English idioms of a century old publication earlier titled, A Vade Mecum by Dasu Kesava Rao Pant. A copy of the publication was recently recovered by Pant’s grandson Dasu Kesava Rao, a former Resident Editor of The Hindu, who took the initiative to reprint it under the aegis of Veteran Journalists Association.