Less than an hour after the city of Buffalo, New York, took a 123-second pause on Saturday to memorialize the victims of the terrorist attack that shook the city a week ago, June Bloomfield held her own moment of silence.

Standing outside the Tops Market, the only grocery store in the area, where white supremacy stole the lives of 10 people, Bloomfield’s tears were obscured by sunglasses, a mask and her quiet resolve. “It’s not fear”, she said, trying to summon the words that described her feelings. “It’s … All I can say is, I’m not afraid.”

On Saturday, the residents of Buffalo’s East Side took part in the traditional Black gathering ritual that finds solace in music, food and – most of all –togetherness. Throughout the day, a dense, almost palpable fog of grief wafted through Buffalo’s East Side air, sitting on the collective chest of an entire neighborhood, refusing to move. Yet, alongside the alchemy of producing Black joy from pain, there arose one almost unanimous consensus among the unpublished, uncounted victims. If the alleged mass murderer’s goal was to inflict terror, then the man responsible for this trauma failed miserably.

There is no terror here.

For Sabrina Madison, the violent tragedy served as both a teaching moment for her daughters and an opportunity for the city to eliminate the daily dose of white supremacy swallowed by the people who live on the East Side. Madison hoped that the events would awaken people everywhere to the inequality that exists in neighborhoods like the one where she was born and raised but she also knows that it won’t be easy – someone must make it happen.

“I drive my 12-year-old past here to her art lessons every day,” said the mother of two. “When this happened, I explained to her what happened and we started talking about what a food desert was and how it affects the community.” After calculating that a trip to the grocery store would take well over an hour if Sabrina didn’t own a car, the family decided that gratefulness was not enough, and signed up for FeedMore, a local food bank. “We will be doing our part once a month, delivering food and groceries to those in need.”

Sabrina’s daughter, Charlize Madison, was mostly just relieved that she was at her grandmother’s house – just two blocks away from where the mass shooting took place. While that might seem uncomfortably close, she noted matter-of-factly that things could’ve been worse. “My Nana is always in [Tops],” the sixth-grader explained. “And that Tops is so close to home, I probably would’ve heard it if I was outside. So, I guess I gotta do something.”

Among the adults, even those who weren’t directly connected to the deceased, there was a common sentiment of outrage mixed with anger. But residents refused to let themselves be transformed by the negativity.

“I would say honestly as a community we’re outraged,” said 22-year-old Divine Blackburn. “I understand that it’s different if it’s your personal family but, as a community, we are grieving just the same. These were elders in our community. The youngest person who died or who was fatally injured was 32, meaning that everybody who passed away was over 50. And that’s like, you’re killing our grandparents. You’re killing our great aunts and that’s not OK. If there’s a sickness like Covid that’s going around, that’s something that we can prevent. But when somebody is consciously making a decision to take away a life, it’s a big difference.”

The youngest person who died or who was fatally injured was 32, meaning that everybody who passed away was over 50. And that’s like, you’re killing our grandparents

“But I know my people are gonna be able to heal from that,” Blackburn continued. “We can take that energy and build with it. And that’s what we’re trying to do. That’s the only reason we’re out here today.”

Perhaps the greatest example of Buffalo’s communal steadfastness was offered by Cher Desi, who recounted how 86-year-old Ruth Whitfield – the oldest of the victims – made her part of the Whitfield family when Desi’s biological mother was unable to care for her as a teenager. Desi spoke about Whitfield’s years of service in her church, her community work and how she loved football. Desi recalled the day she called the woman she considers her “mom” to tell her that she had fallen in love and that her partner was white.

“She asked me: ‘Does he make you happy?’ Because that’s all she cared about,” said Desi. “That’s all any of us should care about. That’s how I know my mother and the other nine victims didn’t lose their lives in vain. That’s why we have to turn this into something positive. No matter how hurt I am, no matter how angry and confused we are, we have to conquer hate with love by calling this what it was. It was a domestic terrorist act of racist gun violence. And going forward, everyone should spread that message. If you are silent; if you are quiet and you’re not speaking out against hate and racism, you’re part of the problem.”

As people gathered to listen, Desi pulled out her phone to share a few statements on the power of love. She quoted Martin Luther King Jr. Although she suspected that Whitfield would object – Desi even quoted her mother’s college football nemesis, Tim Tebow, who said: “The purpose of life is not to be happy. It is to be useful, to love people, to be honorable, to be compassionate, to have it make some difference that you have lived and lived well.”

There may be sadness and pain, but there is no terror in Buffalo. White supremacy has struck out.

This dedication to positivity should not be taken as a metaphor for Black people’s willingness to bear the burden of white supremacy. Long suffering has its limits and America’s tragic racial flaw is pushing some communities dangerously close to that breaking point. In fact, the only moment that even came close to inspiring fear happened when Desi ended an address to a group gathered near the grocery store by reading an excerpt from one of Whitfield’s favorite poems – Warning by Langston Hughes:

They change their minds. 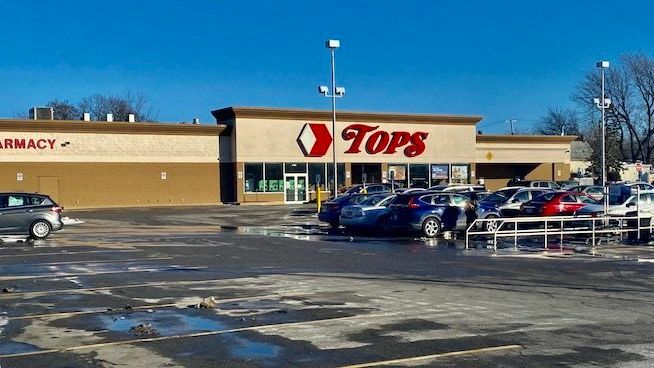 Buffalo Shooting Underscores The Human Cost Of Hatred
“Hate and fear are being given too much oxygen,” said President Joseph Biden, condemning the attack in a visit to…

Zenger
One subscription that gives you access to news from hundreds of sites
‘His heart is broken’: Buffalo mourns shooting victims as first funeral held