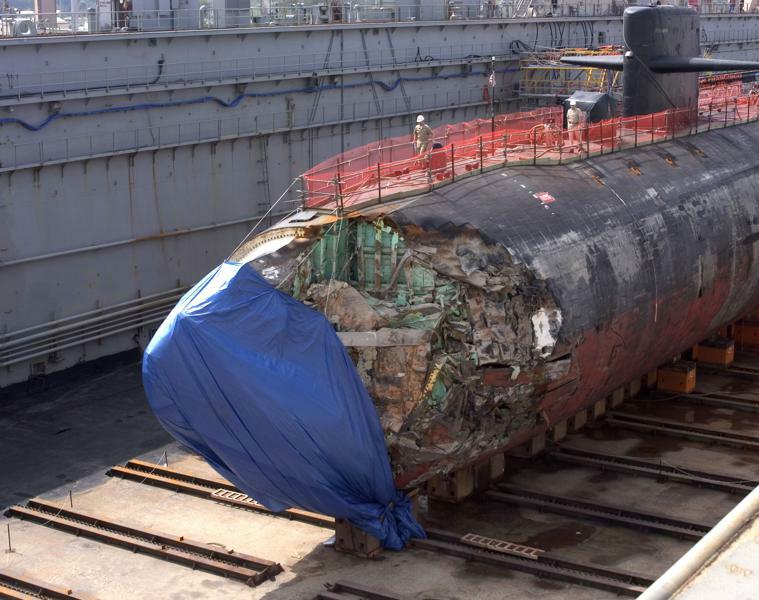 Sixteen years ago, the attack submarine USS San Francisco (SSN-711) struck a seamount, surfaced, and went to the island of Guam, America’s westernmost outpost in the Pacific Ocean. After the hurt sub arrived at Guam’s Apra Harbor, the Los Angeles class submarine went into a local dry dock, where shipyard workers made the damaged ship safe enough to make a 6,500-mile journey home to Puget Sound Naval Shipyard for permanent repairs.

History, it seems, is repeating itself. Earlier this month, after the Seawolf class attack submarine USS Connecticut (SSN 22) struck an underwater object, the damaged sub surfaced and made for America’s safe-haven at Guam.

But this time, the reception of the USS Connecticut is going to be a little different.

Today, the only thing Guam offers the USS Connecticut is privacy. The dry dock that supported the USS San Francisco is gone. A handful of Guam-based ship repair workers are available, but they are only certified to conduct basic, pier side repairs. Only the specialists aboard a set of 42-year-old submarine tenders can help.

If the damage to the sub is severe, it will be a real struggle to patch up the USS Connecticut enough so it can make a safe transit to the Navy shipyards in either Hawaii or Puget Sound—over 6,500 miles away.

The Navy’s lack of ship repair support in the central Pacific is a serious matter.

If Carlos Del Toro, the 78th Secretary of the Navy, really expects to “expand forward presence” and “enhance warfighting readiness” throughout  the Pacific, he can start by reinvesting in a forward repair capability at Guam, so that ships and submarines, if damaged during forward operations, can get fixed.

A few hundred million dollars for an expeditionary floating dry dock, a berthing barge and some local ship repairers would pay for itself—unless the Navy is content to occasionally strand damaged $3.4 billion submarines in Apra Harbor, with no safe way to get back home.

This predicament has been a long time coming. In 1995, the Base Realignment and Closure Commission, reflecting Department of Defense disinterest in basing ships in the Marianas Islands, ripped the heart out of the U.S. Navy’s shoreside establishment at Guam. Along with closure of Guam’s Ship Repair Facility, the Fleet and Industrial Supply Center and Naval Activities were shuttered in 1997—and in an ironic sense of timing, the repair yard the USS Connecticut desperately needs was closed 24 years ago, the very same month the powerful sub was launched.

The Navy’s shore establishment on Guam has failed to keep pace with America’s focus on the Pacific. Naval ships are back. The Mariana Islands are now home to an Expeditionary Sea Base, two sub tenders, four nuclear submarines and a host of ten or so Military Sealift Command Vessels associated primarily with U.S. Marine Corps or Army prepositioning programs.

Even as new ships arrived, the shore maintenance support has dwindled.

Guam’s two aged dry docks are gone. The World War II-era floating dry dock Richland (YFD-64) was sold off in 2016 to a Philippine maritime service provider. The Machinist (AFDB-8), a large auxiliary floating dry dock known locally as the “Big Blue,” was a relatively young platform, delivered to the United States in 1980. Damaged after a 2011 hurricane, the dry dock was sent to China for modernization in 2016, and is, apparently, still there.

Workers have drifted away, too. The original pool of 800 workers that supported the shipyard in the early 1990’s has shrunk down to a few hundred at most.

In 2018, with naval activity at Guam at a post-Cold War high, the Navy inexplicably mothballed the repair facility, with no apparent plan to recapitalize it.

Terrible as it is, the USS Connecticut’s predicament is shining a welcome light on the America’s weak support infrastructure in the Pacific. Guam’s repair facilities have been underfunded for decades, an easily-dismissed “old-school” industry that was ignored even as the Department of Defense poured more and more resources into the region.

If Guam is to be the safe-harbor of choice for troubled Navy ships—from the damaged USS San Francisco, to the COVID-19 infected aircraft carrier USS Theodore Roosevelt (CVN-71), and now the wounded USS Connecticut, the Navy is obligated to provide Guam the tools to handle these crises.

With no photos of the USS Connecticut floating around, the publicity-minded Commander of the U.S. Indo-Pacific Command, Admiral John C. Aquilino, may like that Guam’s naval base is away from prying eyes, but the Navy needs to think a bit harder on how Guam can support the fleet beyond just being “off the radar.”

Divesting shoreside support to reinvest in vessels that cannot be repaired in the Western Pacific theatre is foolishness. This cannot continue.

For Guam and the rest of the deep Pacific, floating dry docks, more vessel/sub tenders and expeditionary shipyard support might be boring fare for today’s modernization-minded Pentagon, but old-school infrastructure offers a way forward. As the Western Pacific heats up, sub crashes and other accidents are inevitable. In this fractious Pacific future, floating dry docks and maintainers in a strategically-useful locations will be invaluable.

Those improvements may be expensive, but America cannot afford to have damaged capital ships stranded on remote islands, unable to get safely home.