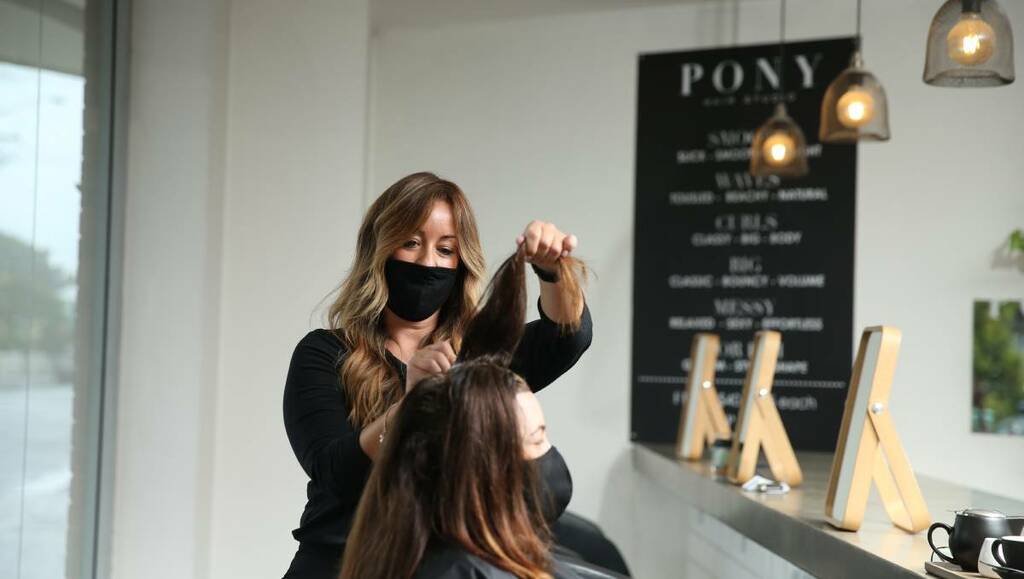 THE wet weather is not dampening the enthusiasm of fully vaccinated Hunter residents to shake off the past two months of lockdown and head to hairdressers, gyms, cafes, shops and to catch up with loved ones.

Owner of Pony Hair Studio at The Junction, Emma Johnson, said she and three other stylists were just as excited as their clients to get back into the salon.

She said they would be working 12 hour days for the next fortnight to be able to see everyone who has had their appointments cancelled since the region's lockdown began on August 5.

"It will be crazy, I don't think I'm going to sleep for the next seven days," Ms Johnson said. "It's great, I think we're going to make up for the 10 weeks of being closed in probably the first week of opening."

Ms Johnson said the studio was adhering to capacity limits and would see 22 people on Monday.

"Unless we work until longer than midnight that is the maximum we can do in a day," she said.

"We're just doing the colours and cuts services, we're not doing anything else like blow-waves.

"Anybody that had an appointment when we closed, they've had priority to get in for the first two weeks.

"We've got a [waiting] list, honestly it's bigger than my arm, of people trying to get in this week that we just can't get in."

She said she and her staff would be fuelled by "lots of coffee and sugar" and see clients from 9am to 8pm on weekdays and 9am to 4pm on Saturdays for the next fortnight, "but will probably run over", before returning to their normal operating hours.

"We're literally doing over 65 hours each just in the first week to get everybody in," she said.

"I think we're all happy about it, there's me and three other girls and we're saying 'You know what? This is going to be really good'.

"When we all sat down and decided what hours we wanted to do, we were all like 'We'll do 12 hours a day, we're not even bothered'.

"The 10 weeks off, we've all rested up, we're all really outgoing people - it comes with the job- so I think we've all been talking to our bloody walls and now we've come in and it's like 'Oh my gosh yes', it's great just to hear people and chat to people and see the faces again."

Ms Johnson said she and her team came into the studio on the weekend to do their own hair.

"We all appreciated it, so I'm like 'God, the clients will feel a million dollars after they've left today'," she said.

"It's going to get them [ready to] step back in life and make them feel great again.".

Ms Johnson said she had been asking clients to email in their vaccination certificates a week before their appointment, plus show it on the day. All but one have been on board.

Bianca Boulton was one of the first people in the salon's chairs on Monday morning, ready for a fresh colour and to have her weft hair extensions reattached.

"The team here have shown such great leadership in opening up in a COVID-safe manner to service not just me, but all of Newcastle.

"I feel younger because I had a lot of greys and regrowth and obviously with the stress of life more greys than normal, so I feel younger and more normal."

Ms Boulton was originally scheduled to visit the salon more than 10 weeks ago, but was stuck in Victoria.

"I couldn't get back here because of the Melbourne lockdown so I had to cancel and then by the time I got back it was lockdown here and I figured I'd have to wait just like everybody else."

Beauty By Blush owner Marilen Innocenzi said she and her three colleagues saw about 40 clients on Monday, the most allowed under capacity limits, and were fully booked for the next four weeks.

She said Monday's clients were also rebooking their next appointments for a month's time.

"It's mixed emotions, it's excitement, it's anxiousness, it's a bit of everything, but it's been great, seeing all our clients again has been amazing and everyone is just so happy and in good spirits, so it's great to be back," she said.

She said most clients had their vaccination certificates ready to present when they arrived at the Kahibah salon.

Ms Innocenzi said she gave priority to clients who had missed appointments during lockdown and those on her waiting list before opening up her online bookings.

She said the most popular treatments were eyebrow waxes and tints, leg and Brazilian waxes and dermaplaning facial exfoliation "for an instant glow".

"The clients we've had this morning have all been so thankful and happy," she said.

"It's amazing what a brow wax does for your mood, you feel so much cleaner and better about yourself. Especially wearing a mask as well, the first point of contact or looking at somebody is their eyes now, so you definitely want them to be enhanced and clean and neat."

Ms Innocenzi said she set up an online store during last year's lockdown and opened for click and collect three days a week.

"Clients were asking about skin routine and facials and brow tinting, so I then put together some at-home treatments for them to do at home," she said.