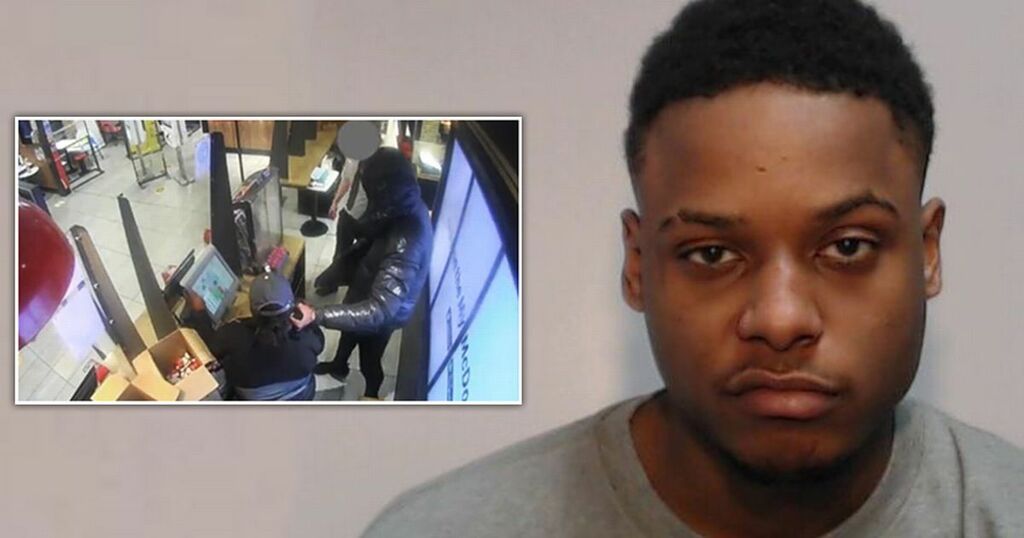 A man stabbed a Greggs worker twice, terrorised a McDonald's cashier, threated Subway staff with a 'gun' and slashed a Sainsbury's employee's hand in a string of horrifying robberies.

Jose Da Silva left his victims fearing for their lives during his reign of terror throughout November and December last year.

His crimes included grabbing a McDonald's employee and holding a knife to her stomach.

READ MORE: What unidentified man who died on train tracks was wearing - and what he looked like

The 20-year-old also threatened Subway staff with a 'gun' and sliced open a Sainsbury's worker's hand.

Da Silva claimed he carried out the callous attacks as he needed money after being kicked out of his family home.

Details of the terrifying incidents were revealed at Manchester Minshull Street Crown Court as he was sentenced.

He was sentenced to 14 years.

The employee had arrived early for her shift and was sat in her car when she noticed Da Silva standing nearby dressed in dark clothing.

After she got out of her car and put her phone in her back pocket, she leaned inside the vehicle to retrieve other items.

Da Silva then walked quickly towards her and demanded she hand over her phone.

The court heard the victim went to challenge him, but noticed he had a knife in his hand.

He then placed it against her neck.

After demanding her phone again, the victim said it was in her back pocket and she was struggling to reach it.

Da Silva grabbed hold of her hand and sliced it open with the knife, causing it to 'bleed considerably'.

The victim eventually managed to grab her phone and throw it on the floor, Charlotte Crankle, prosecuting, said.

Wearing his hood up and a Covid mask, Da Silva picked it up and calmly walked away behind M&S.

An ambulance was called and the victim was taken to hospital, where it was found the cut caused damage to her tendons.

She underwent and operation and will need physiotherapy for the foreseeable future.

In a victim impact statement, she said the attack left her feeling as though she 'didn't want to be here anymore'.

She also said she has 'lost all faith in human nature' and has since been diagnosed with anxiety.

The victim said: "I feel like a part of me has died, like I'm not the same person anymore.

"I just feel sad a lot of the time knowing someone could do this to another human being for no reason.

"I have only got through each day knowing I have the love of my family."

The court heard the following month - on December 1 - the duty manager of Farmfoods in Openshaw was serving customers when Da Silva stood next to him.

He had his hands in his pockets and pushed 'something sharp' into the staff member's ribs.

Da Silva then demanded he open the till, saying he had a knife.

The staff member refused and walked away, holding a £10 note.

Da Silva snatched the cash from his hand and walked out of the store.

The staff member told the court he continues to feel scared following the attack.

The following day, at Subway in Clayton, Da Silva entered the store at around 5.20pm and ordered a sandwich.

He handed over £5 but then took a step back away from the counter.

Staff believed he may have wanted to social distance due to employees not wearing masks.

But he then jumped up and landed towards the counter, kicking the protective screen in the process.

He demanded money from the till and told staff he had a gun.

Da Silva stole £150 from the till before calmly walking out of the shop.

One staff member said the ordeal left her 'shaken up' and she no longer feels comfortable working.

On December 3, Da Silva walked into the Greggs store on Queens Walk in Droylsden and placed some items on the counter before requesting some food from the display.

As a staff member went to turn around to place the items into a bag, he went behind the counter and grabbed her hair.

Da Silva said he had a knife.

As he ordered her to open the till, he stabbed her in the hip.

The employee said she was unable to open the till and he stabbed her again in the buttock.

He eventually let her go and she ran towards the staff area.

She said she heard a loud bang and saw Da Silva pulling the till off the counter.

By that time, another member of staff had pushed a 'panic button' in the shop and asked a member of the public to call the police.

Nothing was stolen as Da Silva did not manage to open the till.

In a statement, the victim said the incident left her feeling 'angry, upset and confused'.

She was left needing stitches for her stab wounds and no longer feels comfortable going out alone.

She also said her life has changed 'significantly' following the attack and she struggles to sleep at night.

She said: "I do not think I will ever feel the same again.

"I don't think I will ever get over this."

On December 7, Da Silva entered a Go Local shop in Audenshaw just before 11am.

He jumped over the counter and shouted at a staff member to empty the till.

During the robbery, he had his hand in his pocket, suggesting he was carrying a weapon.

On December 10, Da Silva walked into the Subway branch on Wellington Road in Ashton and ordered a sandwich.

There were other customers present in the store at the time.

After ordering his food, he moved along to the next counter while his sandwich was being heated.

The next minute, a staff member found Da Silva standing next to him.

Da Silva pushed his head towards the counter and pressed a sharp object into his side, demanding he open the till.

The staff member opened the till while Da Silva pointed a knife at other employees, ordering them to keep back.

On December 14, Da Silva entered a Greggs store in Clayton.

A staff member was behind the counter when he walked into the branch.

Da Silva then started violently pushing and pulling at the security gate separating staff from customers.

Eventually he broke through by kicking it with force.

He then grabbed a female employee by her hair and shouted at her to open the till.

She explained she was unable to do so due to another order being processed at the time.

Another colleague opened the machine and Da Silva let go of the woman's hair while pointing a knife at other staff.

He then left the shop with £200. The victim told the court she had 'never been so scared..

On December 16, Da Silva's terrifying crime spree finally came to an end following an incident at a McDonald's branch in Ashton.

He entered the restaurant at around 6pm and ordered food using a digital kiosk.

A staff member watched as he loitered while waiting for his meal before walking into the staff-only area.

He grabbed a staff member by the back of her neck and took out a large knife.

He then held it against her stomach, telling other employees he was prepared to use the weapon.

A manager was alerted to the commotion and opened a till.

Da Silva let go of his hostage and took money from the machine before walking around the kitchen in search of more cash.

He eventually left the restaurant with £90.

By chance, there was an off-duty police officer in the drive-thru with his children at the time of the incident.

He was made aware of the robbery and immediately contacted other officers.

Da Silva was spotted at a nearby tram station and attempted to flee after spotting police.

He was eventually stopped after surrendering himself.

Mark Fireman, defending, said Da Silva has no previous convictions and moved to the UK from Portugal five years ago.

He told the court he was kicked out of his home after losing his job and having no income.

After becoming homeless, he embarked on a 'spree of serious and violent offences' for money.

Mr Fireman said: "He was depressed after losing his job and his home.

"I am in no way suggesting that his poor circumstances justify what he put his victims under.

“He does appear to have regretted his pattern of behaviour.

“He has no contact with his family and has not been visited since being in custody.

“A lot of it is his own fault, but it’s a rather sad situation for someone of his age.”

“You are still a young man and I bear that in mind,” he said.

“You said you were hungry and that was a driving force.

“That baffles me as shoplifting if you were hungry would surely be the answer to that without the need for violence.

“This was callous and ruthless and you left a trail of trauma and harm to those who you targeted.”

'This was a terrifying series of incidents'

Following the case, Detective Constable Chris Oldham, of GMP's Ashton-under-Lyne CID, said: "This was a terrifying series of incidents across a number of stores in the Tameside and east Manchester areas and Da Silva deserves every bit of yesterday's sentence.

"The fear and intimidation he caused by grabbing and threatening his victims was palpable, and no one should go to work and be subjected to such appalling acts of crime.

"I would like to pay tribute to everyone involved in this investigation who helped achieve this conviction; from the immense bravery and courage shown by the victims of these incidents, to the witnesses who came forward to assist with our investigation and ensure that we were able to bring Da Silva to justice.

"We've worked extensively to get this man in custody and ensuring he is held accountable for the full extent of his offending; this has seen us view hours of CCTV footage and speak to dozens of witnesses and victims to build a compelling case that ultimately saw Da Silva throw the towel in with unanimous guilty verdicts in court.

"Da Silva's aggression and violence, coupled with the frequency that he committed these offences in just a couple of weeks, highlights exactly how dangerous this man is and I am confident that our stores, streets, and communities are much safer now he is behind bars."