By Jacob Steinberg at Wembley Stadium 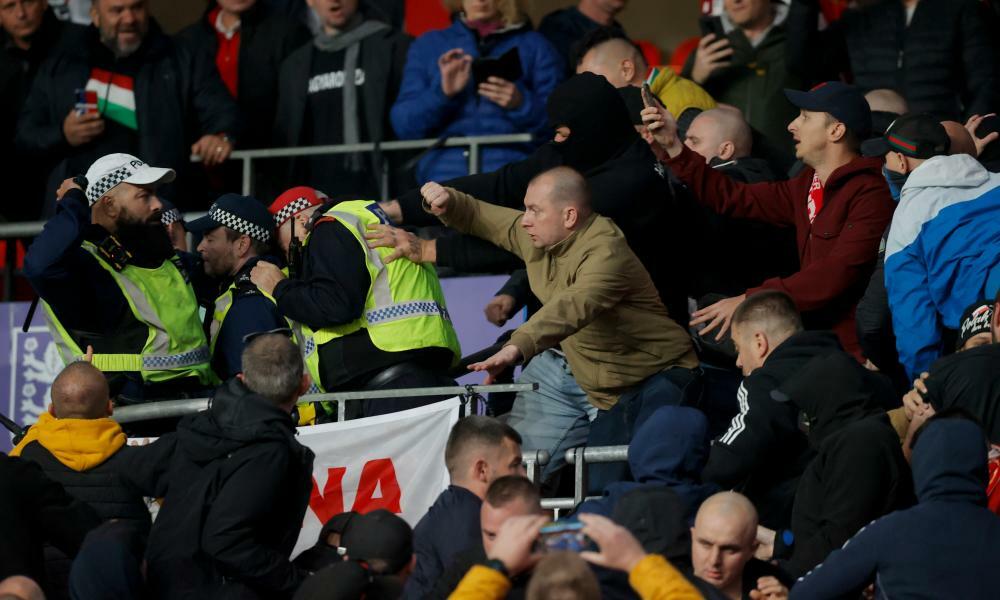 Hungary supporters were involved in more ugly scenes as they clashed with police officers at the start of their team’s World Cup qualifier against England on Tuesday night.

Fifa is likely to launch an investigation after trouble broke out in the away section during the first 10 minutes and the incident will raise further questions over the behaviour of Hungary’s fans.

The Metropolitan police said the trouble started when their officers entered the away end to arrest a fan suspected of racially abusing a steward.

The travelling supporters were under scrutiny after racist abuse was aimed at England’s players in Budapest last month and Fifa will be expected to issue further sanctions after the latest bout of disorder.

Fifa’s disciplinary committee acted after Jude Bellingham and Raheem Sterling were targeted with monkey chants when England won 4-0 at the start of September. Hungary were ordered to pay a £158,000 fine and were forced to play last Saturday’s World Cup qualifier at home to Albania behind closed doors. The penalty of a second game without spectators was suspended for two years.

That punishment came after Hungary were ordered to play their next three Uefa home competition games behind closed doors after incidents of racism and homophobia at Euro 2020, with one of those games suspended for two years.

Based on the conduct of Hungary’s supporters at Wembley, however, those sanctions appear to be having little effect. There was a hint of what was to come when they booed as the teams took the knee before kick-off – there was also a banner expressing opposition to the anti-racism gesture – and it was not long before the fighting broke out.

The Metropolitan Police Events Twitter account said: “Shortly after the start of tonight’s match at Wembley, officers entered the stand to arrest a spectator for a racially aggravated public order offence after comments made towards a steward. As the officers made the arrest, minor disorder broke out involving other spectators. Order was quickly restored and there have been no further incidents at this stage.”

Police officers were quickly embroiled in clashes with black-shirted Hungary supporters. Police appeared to use batons in an attempt to restore the order, but they were overwhelmed and forced back on to the concourse.

Hungary’s supporters did not appear to be intimidated by the police presence. Pockets of them also moved towards the home sections after John Stones scored England’s equaliser shortly before half-time. However, they did not make it across the security netting.

The trouble will also raise questions over security measures at Wembley. Uefa has opened an investigation into the disorder that took place when England lost to Italy in the final of the Euros. Ticketless fans were able to gain entry by storming turnstiles and the chance remains that Uefa could order England to play at least one home game behind closed doors.

Hungary’s manager, Marco Rossi, refused to talk about the behaviour of his team’s supporters. “I don’t want to comment on this situation,” he said. “It is not my task. Everything I could say could be interpreted in a different way.”

The Football Association said: “We are aware of an incident in the away section during tonight’s Fifa 2022 World Cup qualifier at Wembley Stadium. We will be investigating and will report the incident to Fifa.”

Tyrone Mings said that England’s players were not fazed by Hungary’s fans booing the knee. “We’ve faced criticism for taking the knee and we have collectively stood passionately together,” the England defender said. “That has carried us as a squad. It doesn’t change when people hold banners or disagree.”