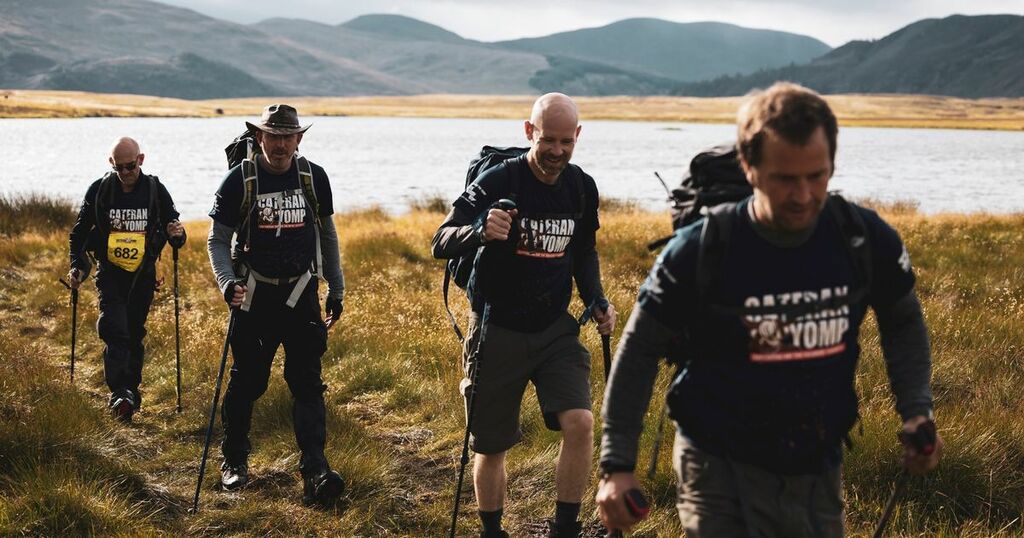 An endurance challenge held amongst stunning Perthshire countryside at the weekend has raised over £400,000 to help soldiers, veterans and their families.

Participants in the 10th Cateran Yomp descended on the region on Saturday and Sunday, with 515 soldiers and civilians walking side by side along routes of either 22, 36 or 54 miles on the historic Cateran Trail in the foothills of the Cairngorms in east Perthshire.

The 24-hour trek raised money for ABF The Soldiers’ Charity, which, since 1944, has been providing a lifetime of practical and financial assistance to soldiers, veterans and their families across the UK.

Since its launch, the challenge has raised almost £4 million for The Soldier’s Charity, with donations funding everything from wheelchair ramps for soldiers’ homes through to respite care and personal recovery plans for injured soldiers returning from the front line.

Starting at 6am on Saturday and ending in the early hours of Sunday, The Cateran Yomp challenged teams of brave souls to walk 22, 36 or 54 miles in less than 24 hours.

Eddie raised almost £7000 for the charity, the Yomp’s highest total, having also completed a 76 mile challenge earlier in the year. Eddie served with the 1st Battalion The Duke of Wellington’s Regiment for 12 years and revealed he had been inspired by Captain Sir Tom Moore, himself a fellow former Duke.

Eddie said: “It was emotional but I really enjoyed it. The weather was fantastic, I got the course record, on the 10th anniversary and the most sponsorship.

“There are some really nasty hills out there, ones I’d forgotten about which just go on and on, but I really enjoyed it. It’s a brilliant event.”

Second place was Kevin Cooke (47) from Exeter who ran the Gold route in 12 hours 20 minutes, with fellow runner Fabienne Thompson (55) from Perth coming in third at 13 hours 43 minutes.

One participant travelled almost 5000 miles to take part in the event.

He presented a letter of greetings from the Pleasanton mayor to the community council prior to the event.

Guy said: “I was made to feel so welcome and I’m hoping my visit will reinvigorate the relationship between the two communities.”

Describing the hike as “a labour of love”, Guy added: “Sometimes I just had to stop and take in the scenery. What a beautiful country.”

The American completed the 54-mile Gold route, raising over £2000 for ABF The Soldiers’ Charity.

Having arrived in Perthshire a few days before the event, Guy believes his trip was “meant to be” and is delighted he finally had the chance to take part.

He said: “I do a lot of hiking in California and set my heart on the Cateran Yomp after seeing it online. I’d been planning this trip for three years but couldn’t do it two years ago, then COVID struck and then the June Yomp was put back to September.

“It was fantastic to finally get here and complete the trail.”

The Yomp took on added meaning for Guy in May, as close friend Ken Wells, his hiking pal for over six years, passed away while walking in Alamo, California.

“When the Yomp was cancelled in June, I was so disappointed,” he said. “Ken was always an encouragement and wanted me to go to Scotland. I hiked for Ken today.”

Setting them off and welcoming them back was Yomp ambassador Brenda Hale. Brenda’s husband Captain Mark Hale was killed in August 2009 while serving with 2 RIFLES in Afghanistan.

Brenda said: “This was my first Yomp and the motivation, determination and enthusiasm of the participants has been truly inspiring.

“It’s also been both emotional and uplifting sharing my own story and I’d like to thank all of the fundraisers for their amazing support.”

Major General Martin Rutledge, chief executive of ABF The Soldiers’ Charity, added: “After this turbulent 18 months and the postponement of both last year’s event and the June 2021 event, we were delighted to celebrate the 10th ever Cateran Yomp this weekend, a tough but immensely worthwhile challenge for all.

“The event’s success is down to the generosity, hard work and determination of many people whose support and funds will make a real difference to the lives of service people and their families in Scotland and across the UK, particularly during these difficult times.”

Participants were able to enjoy the distraction of live music, magical lit forests and fireworks during the event, which was sponsored by Dover Fueling Solutions and Pure Storage.

The Cateran Yomp also works with a range of local sponsors who donate gifts in kind for the event including Castle Water, Mackie’s of Scotland, Gin Bothy and Tunnocks.