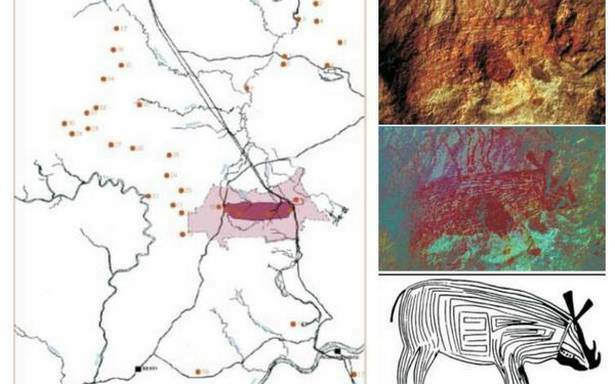 The two-horned Sumatran rhino, revered as fire-eaters by the Karen community in Myanmar, never ventured west of the Brahmaputra floodplains straddling Assam and Bangladesh.

But the animal’s depiction in the Bhimbetka rock shelters of central India’s Madhya Pradesh has provided researchers with a clue to early human migration in the subcontinent.

Spread over 10 km in the Raisen district, Bhimbetka is a complex that includes six other hills containing more than a thousand rock shelters providing evidence of human settlement as early as 100,000 years ago. A two-horned rhino, 30 cm in length, was found drawn with a red pigment — obtained from haematite, an iron ore — in an extensive composition on a low ceiling in Urden, one of the caves in the Bhimbetka complex.

Tracing the human migration through the Bhimbetka cave paintings, researcher Suddhabrata Chakraborty and his Bangladesh-based counterpart Turzo Nicholas Mondal have tried to decode the riddle of this two-horned rhino in an area whose inhabitants probably never saw one.

“Humans, an integral part of the floral and faunal diversity in an ecosystem, thrive and sustain by suitably using the locally available natural resources, thereby establishing an intimate interrelation with the biodiversity and its components. Therefore, the learnings out of the encounters between a group of humans and a particular animal help shape the dominant notion about the animal,” the duo said in their research paper published recently.

The paper is titled “Riddle of the rhino: Tracing early human migration in India through the cave paintings of Bhimbetka”.

Artistic expressions, as in the case of the two-horned rhino depicted in the Urden cave, leave prominent marks on the cultural framework, the duo said. It is crucial to focus on the distribution of rhinos in the Indian subcontinent and the Indo-China peninsula to interpret this painting, they added.

The Indian subcontinent was once home to three species of rhinos — the Indian or greater one-horned, the Javan or lesser one-horned, and the two-horned Sumatran rhino.

The Indian rhino inhabiting areas with an abundance of grasslands and wetlands was once distributed across the Ganga-Brahmaputra floodplains till the Indus Valley but is now restricted to pockets in southern Nepal, northern West Bengal and Assam. About 55% of this animal is in Assam’s Kaziranga National Park.

The lesser one-horned Javan rhino that once thrived in the Indian coastal and flood plains, is now restricted to the Ujung Kulon National Park in Indonesia.

Indonesia also houses the Sumatran rhino, the smallest of the living rhinoceroses and the only Asian species sporting two horns. It was once distributed across the hilly areas of India’s northeast and Bangladesh’s Chittagong.

The researchers noted that, unlike the other two species, there is no evidence of the Sumatran rhinos having crossed the Brahmaputra to venture into central and northern India. The Sumatran’s habit of sticking to elevated areas set it apart from the Javan despite originating in the same region of Southeast Asia.

“As Sumatran rhinos could not cross the Brahmaputra, the painting of the species in the central Indian cave becomes all the more significant. First, the only place in the subcontinent where humans could have encountered the Sumatran rhino, except the Indonesian archipelago, was in the mountainous regions of eastern Bangladesh and northeast India,” the researchers said.

“Secondly, as the painters of Bhimbetka couldn’t encounter a Sumatran rhino, the painting was most probably drawn from an image imprinted into their minds. Thirdly, taking the distance between Bhimbetka and the Brahmaputra into account, it can be inferred that the image was cultivated from the pool of rich ancestral memory that echoes a harmonious relationship with biodiversity,” they said.

They analysed three connecting threads — cultural, linguistic and genetic, and typo-technological — to understand how the knowledge about the two-horned rhino travelled to Bhimbetka.

Waves of people from multiple origins inhabited Bhimbetka over the centuries, but the two-horned rhino would not have been depicted in the Urden cave had the migration of people been eastward, the researchers said.

“Therefore… the same wave of the migratory population that encountered the Sumatran rhinos in the eastern Brahmaputra floodplains while migrating from Southeast Asia to the Indian peninsula during the Mesolithic period, reached Bhimbetka. By the time they were there, the memory of those encounters had imbibed through ancestral knowledge, which helped them to draw the paintings of the two-horned rhinos,” they said.