The West fears Vladimir Putin will resort to “barbaric tactics” as his forces close in on Ukraine’s capital.

A Russian military convoy around 40 miles long is north of Kyiv and there are fears that the city will face a barrage of rockets and shells which could inflict devastating civilian casualties.

Ukraine has already accused Russia of war crimes during the invasion over the bombardment of civilian areas in the second city Kharkiv.

Deputy Prime Minister Dominic Raab, a former Foreign Office lawyer, said it must be clear “both to Putin but also to commanders in Moscow and on the ground in Ukraine that they will be held accountable for any violations of the laws of war”.

He told Sky News: “Those that engage in war crimes will be held to account.”

The chief prosecutor of the International Criminal Court, Karim Khan, said he plans to open an investigation “as rapidly as possible” into possible war crimes and crimes against humanity in Ukraine.

Western officials fear that the slow progress of the Russian invasion will lead Mr Putin and his commanders to adopt more brutal and indiscriminate tactics to achieve the Kremlin’s goals.

Mr Raab told BBC Radio 4’s Today programme: “We can expect, for every stutter and stumble, him to try and come back for even more heavy-handed tactics, but that is a sign that the initial phase at least – and this is going to be a long haul – has not lived up to his expectations.”

Mr Raab told LBC “nothing is off the table” in support for Ukraine in response to a question about whether the UK would supply fighter planes.

But the Ukrainian air force largely flies jets from the former Soviet bloc so it is unlikely that British planes would be helpful due to a lack of pilots trained in their use.

The latest intelligence from the Ministry of Defence said the advance on Kyiv had made little progress over the past 24 hours, probably due to logistical problems.

But there had been increased use of artillery north of the capital.

The MoD also said that Russia had been forced to shift to more night operations due to the failure to gain air superiority.

Satellite images from the Maxar company showed the extent of the Russian forces massing around Kyiv, with a column of armoured vehicles, tanks, artillery and support vehicles stretching 40 miles.

That force was 17 miles from the capital on Monday.

Prime Minister Boris Johnson is visiting Poland and Estonia to help show the UK’s support for its eastern Nato allies.

Mr Johnson said: “We have shared values that are more important than ever to protect, as the humanitarian situation gets worse.

“Alongside all our international allies the UK will continue to bring maximum pressure to bear on Putin’s regime to ensure he feels the consequences of his actions in Ukraine. We speak with one voice when we say Putin must fail.”

Foreign Secretary Liz Truss was in Geneva addressing the United Nations Human Rights Council, where she was due to accuse Mr Putin of “violating international law”.

“He is violating human rights on an industrial scale and the world will not stand for it,” she will say.

Mr Johnson’s visit to Poland, one of the main destinations for people fleeing from Ukraine, came as the UK Government faced pressure to do more to address the refugee crisis.

“And the normal system just doesn’t work when you are facing war in Europe, when you’re facing a crisis on this scale.” 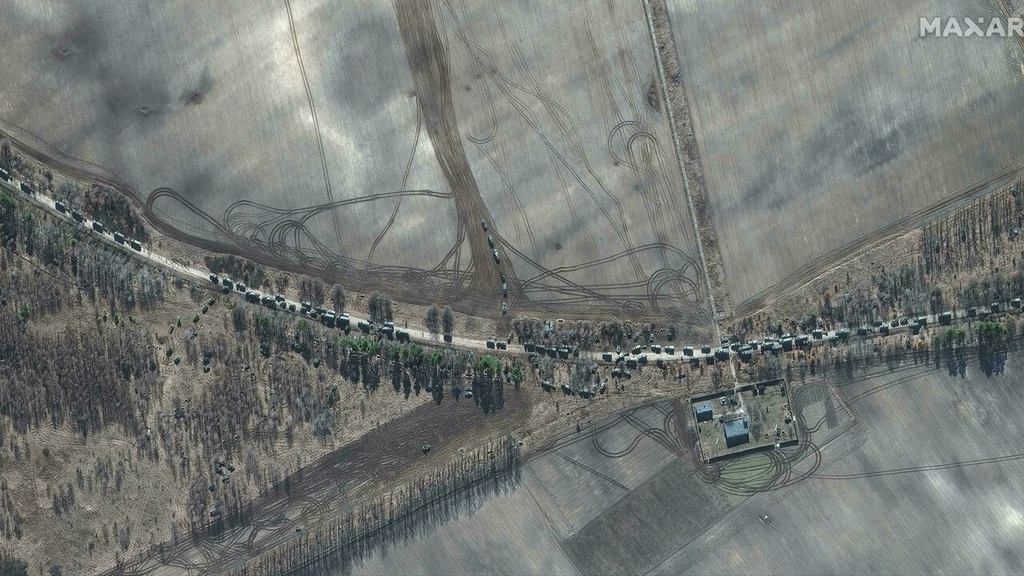 The Prime Minister spoke as Russian forces stepped up their attacks on Ukrainian cities.

A Russian military convoy threatening Kyiv is far bigger than initially thought, with satellite images showing it occupying much of…