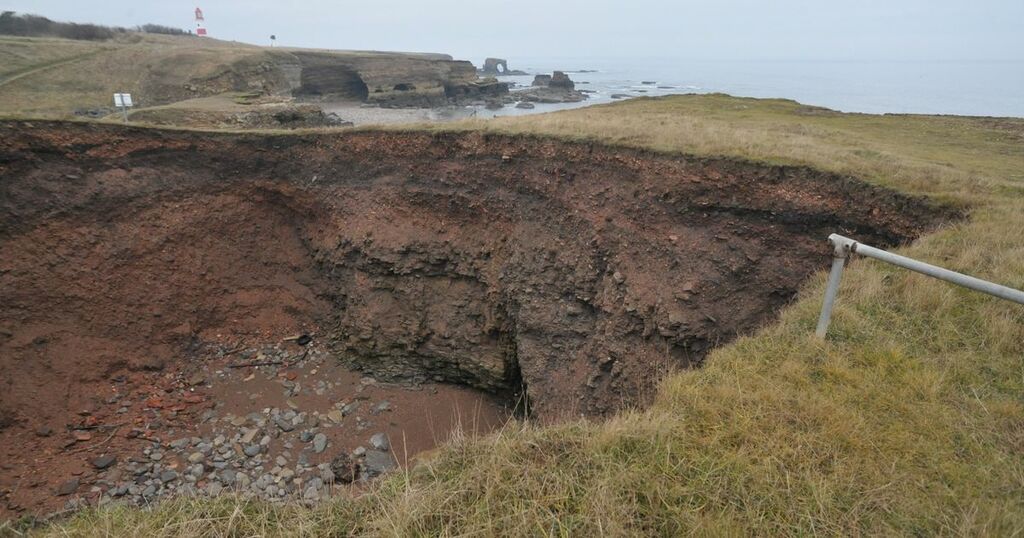 A huge sinkhole at a coastal beauty spot has revealed a hidden underground beach.

Erosion and landslips on the cliffs have left a hole, known locally as Souter Hole, that is 40ft-wide. The phenomenon first appeared as a sinkhole in 2003,

However, the hole has grown wider every year since its discovery and has now grown so big a hidden beach has been revealed with the sea forcing its way through a crack in one of the cliff walls.

Read more: 20-year-old playing cricket with friends on the beach left paralysed after tripping while running into the sea

One concerned local is Dave Robson.

Although Souter Hole, at Whitburn near Sunderland, is amazing to look at, Dave is concerned for the safety of passing pedestrians due to the hole reportedly widening, reports Chronicle Live and The Express.

Speaking to Chronicle Live, he said: "As a general view, it's growing quite quickly now and is incredibly close to the ‘worn away’ path which people are using to look over now.

Dave also spoke of rumours that a dog had fallen into the sinkhole - but no confirmation of such an incident taking place has been reported by local authorities.

He also pointed to the dangers the hole might present in the near future if further preventative action wasn't taken, adding: "The weather is wearing it further back and it's a matter of time before someone drops in."

As it stands, the hole has been surrounded by a railing in a bid to prevent the general public from getting too close. There are also signs standing at multiple locations alerting passers-by of the dangers that the Souter Hole presents, if extra care isn't taken when passing.

"It's amazing how there's only a miniature railing around 18 inches high between any inquisitive onlookers and a sheer drop."

The clifftop region is managed by the National Trust which has also warned walkers and dog owners to avoid the area.

Beach artist and former GP, Clair Eason, said: “This deep sinkhole near Souter Point, South Shields, began as a small hollow a few years ago. It’s growing into a huge beast. It is adding even more drama to the rugged coastline.”

A spokesperson for the National Trust said: “We want all of our visitors to have an enjoyable, relaxed and safe visit to Whitburn Coastal Park.

“By its nature, the coastline is constantly changing. There are some areas particularly prone to erosion and landslips.

"This sinkhole first appeared around 2003 and is regularly surveyed. We have put up fencing and warning signs around this sinkhole. It is away from the main path running along the cliff tops of The Leas and Whitburn Coastal Park. This area is known locally as The Wherry. There are warning signs at key points along the cliff edges, as well as visitor information panels in each car park.

"We'd urge people to take a moment to look at these signs, and to stick to the main paths to keep themselves, their children, and their dogs safe."