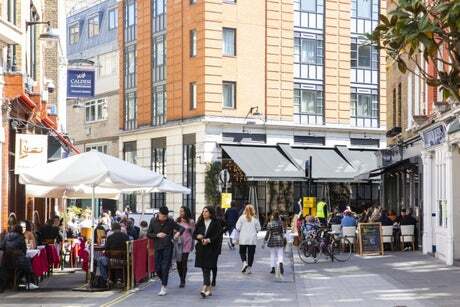 A firm behind one of London’s largest estates has said over £130 million was knocked off the value of its property portfolio during the pandemic, but it pointed to encouraging post-lockdown occupier demand.

Howard de Walden Estates said the value declined by 2.8% to £4.5 billion in the year to March.

Due to lockdowns, numerous stores had to temporarily close across the estate, which spans buildings across 92 acres of Marylebone, during the period. The estate has been under the aristocratic Howard de Walden family’s control since 1879.

The landlord in some cases offered tenants rent deferrals, discounts or other assistance as they tried to ride out the crisis and lockdowns.

That hit rental income and the company, which saw a stronger performance from its medical arm including properties on Harley Street, swung to a pre-tax loss of £101.8 million from a £46.2 million profit.

Chairman Sir William Proby said: “We expect continuing challenges to our business as London slowly recovers, however, we are optimistic that with our strong financial position and countercyclical healthcare portfolio we will see a return to a growth in income and profits in the medium term.”

Chief executive Mark Kildea said: “The effects of the pandemic were ever-present throughout the financial year and heavily influenced the operation of the business. Our rental income and revenue profit were lower than they were 12 months earlier, however, the impact was less severe than we had anticipated at the onset of the crisis.”

He added: “This highlights the underlying strength of our business and our financial resilience, helped by our diversified portfolio and the tireless work of colleagues over the past 12 months.”

The firm has seen the level of enquiries and viewings for commercial properties return to pre-Covid levels,.