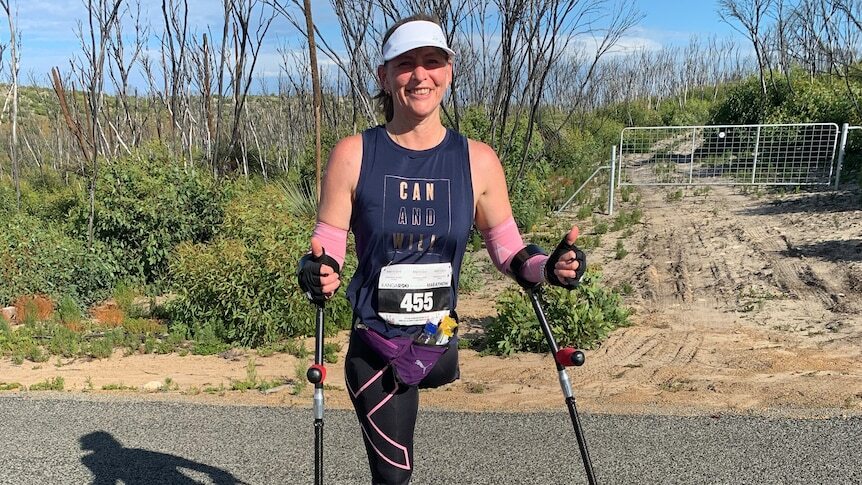 Walking and putting others first is helping Keran Villis stay strong against all odds.

The 50-year-old amputee from Loxton, in the Riverland of South Australia, was diagnosed with a rare form of bone cancer, chondrosarcoma, in 2014 and lost her leg.

Last year, just shy of five years since her first cancer diagnosis, she was told she had secondary lung cancer.

"I actually didn't think I was going to make it," she said.

She was visiting Queensland at the time and pandemic restrictions forced her to drive the long way home because air travel was too dangerous for her lungs.

"It was very frightening, one night it was minus seven and I was sweating a lot because of the night sweats from the lung cancer," Ms Villis said.

She doesn't remember parts of the long journey home and believes spirits were looking over her.

"I don't know, I think it might have been Raamah and my Dad who might have carried me home because I don't remember getting home."

Raamah was the young son of close friends who was diagnosed with cancer around the same time that Ms Villis was first diagnosed.

Sadly, he did not survive.

In his honour, Ms Villis raised about $27,000 for another local family living with childhood cancer by walking.

Since then she has kept on walking, raising funds for childhood cancer organisation Neuroblastoma Australia and also Limbs4Life for fellow amputees.

In May to celebrate her 50th birthday, she completed a half marathon at the Kangaroo Island Marathon event surrounded by fellow Riverlanders.

'Thinking of others keeps me going'

Walking and being in nature has helped her to stay positive.

"Walking is the only time I feel free, at one in nature," Ms Villis said.

"I always feel little Raamah and anyone else that's left us is with me.

"I don't wear headphones. I just like to listen to the sounds around me and walking, and thinking of others keeps me going.

"If I can prevent the next lot of children from getting this cancer, that's what this is about."

Ms Villis works hard on strength training because as an amputee her body is under a lot of strain.

She says she's defied expectations, including her doctors'.

"I've had a couple, even my specialist, a bit teary that I'm here," she said.