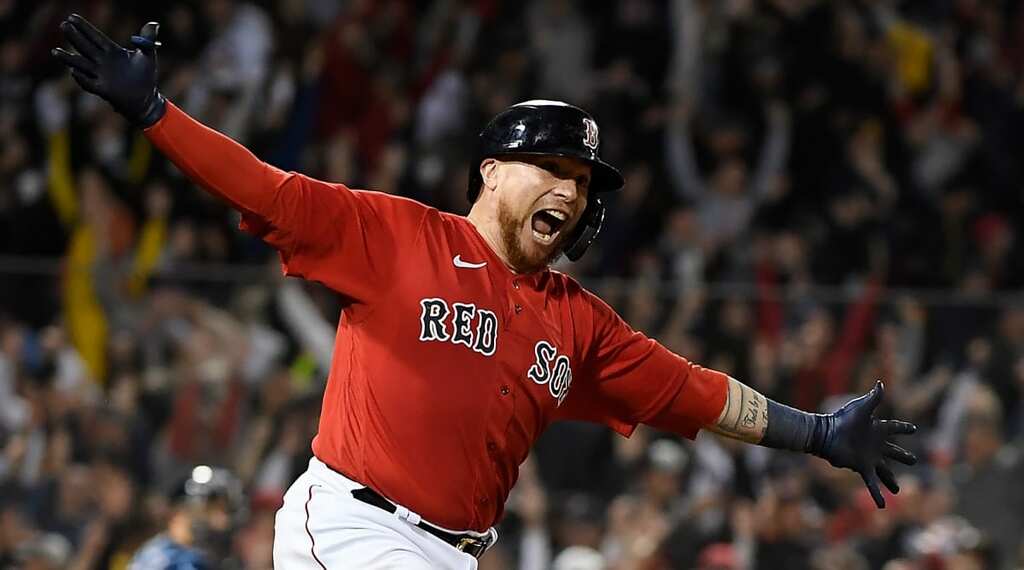 Last night was one of the most absurd nights of Division Series baseball that I can remember. The first game of the night, between the Red Sox and Rays at Fenway, ended after 13 innings in a 6–4 Boston win and a 2–1 series lead. The second game of the night—the first playoff game hosted at Guaranteed Rate Field in Chicago since 2008—featured 15 runs scored across the first four innings. There are so many things to discuss from the bonkers White Sox–Astros game, which the South Siders won, 12–6, to avoid elimination, but we’ll leave that for later on in this newsletter.

In Red Sox–Rays Game 3, we saw extra innings for the first time in the 2021 postseason, and with it came the return of the traditional format in all its glory. I’m on record many times saying how much I enjoy the rule that puts an automatic runner on second base at the start of every half-inning from the 10th inning onward. This rule change came before the 2020 season, and its purpose was to speed up games during the height of the COVID-19 pandemic to limit exposure to the virus. Studies have shown that this rule change did what it was supposed to do—according to a Baseball Prospectus article from late August, the time that extra innings adds to games is down by about 15 minutes from 2019. I like the rule because it injects instant action into games, without altering the fabric of the sport. These games still are timeless, because the “ghost runner” does not limit the number of innings played; rather, it just makes it more likely that these games will end sooner.

The ghost-runner rule also helps protect pitching staffs. Covering nine innings over a 162-game schedule is difficult enough for managers without having to account for 15-inning clunkers in the dog days of summer. Those games tend to feature one or two relievers who throw 40+ pitches, and regardless of how well they pitch, are optioned down to the minors the next day. Nice job, kid. Hope you enjoy those 15-hour bus rides from Albuquerque to Reno! With the ghost-runner rule, teams don’t need to make as many roster moves for fresh arms after long extra-inning games, because there are fewer long extra-inning games. (It’s worth noting here that we may have seen the last of the ghost-runner rule. Commissioner Rob Manfred said in July that after the season, the league would be discussing with the MLB Players Association whether to, among other things, return to the traditional extra-innings rule.)

The crucial part of this, though, is the ghost-runner format applies only to the regular season. That’s exactly how it should be. The playoffs are a one-month sprint, consisting of only that year’s best teams—teams that should have the most talented and deepest rosters. Those rosters are set before every postseason series, and they cannot be altered unless a player gets injured during that series. In those instances, the injured player is replaced on the roster and is ineligible to play in the following series. So when constructing their playoff rosters, front offices need to prepare for every scenario. Want to yank your starter before he faces a lineup three times? Go for it, but you better have enough relievers to make it through the five- or seven-game series. And you need to make sure those relievers aren’t completely gassed by the second or third series—that is, if your team is good enough to advance that far.

That brings us to last night’s ALDS Game 3 at Fenway. It will certainly be remembered for the bizarre automatic double in the 13th inning (more on that later), but I’m much more interested in the impact it has on these teams moving forward. Both teams had to use relief pitchers who were supposed to be their starters in tonight’s game: Nick Pivetta for Boston and Luis Patiño for Tampa Bay. Pivetta went the final four innings, allowing no runs and striking out seven on 67 pitches; Patiño threw 1 1/3 innings before allowing the walk-off two-run homer to Christian Vázquez. The Red Sox used seven pitchers, the Rays, nine.

Tampa Bay’s depth of pitching was considered a strength entering the playoffs. Boston’s was perhaps its greatest weakness. But this series has exposed the Rays’ hidden wart: starting pitching. They turned to three rookie pitchers to start the first three ALDS games. Shane McClanahan, their Game 1 pitcher, went five scoreless innings and turned it over to their bullpen in a 5–0 win. Neither of the next two rookies, Shane Baz and Drew Rasmussen, completed three innings, and each allowed three runs. These short starts have already strained the Tampa Bay bullpen. ​​JT Chargois and David Robertson have pitched in all three games so far, while J.P. Feyereisen and Matt Wisler have appeared in two of the three. Collin McHugh, who pitched 1 2/3 relief innings and allowed three runs in Game 2, is tabbed to open tonight’s Game 4. McHugh completed two innings in five of his seven starts this season, with his longest lasting 2 1/3 innings. So Kevin Cash will be going to his bullpen early again tonight, with the Rays facing elimination. He still has plenty of quality arms to choose from, such as Andrew Kittredge, Pete Fairbanks, Josh Fleming and maybe even Patiño, considering he threw only 15 pitches last night. But if the Rays do advance, and continue to churn through relievers in the process, they risk wearing down those pitchers as they get deeper into the playoffs.

Boston is starting Eduardo Rodriguez in Game 4 on short rest, after he went just 1 2/3 innings in Game 1. Unlike the Rays with McHugh, the Red Sox are relying on Rodriguez to go at least two times through the Tampa Bay order. He’s built up to carry a starter’s workload, so he’ll keep going as long as he gets some run support and limits the damage, though that’s far from guaranteed. Once Alex Cora goes to the bullpen, though, his options are a bit limited, especially if Rodriguez doesn’t pitch well. It may be too soon for Cora to turn to Tanner Houck, who pitched five brilliant innings in Friday’s Game 2 after starter Chris Sale lasted just an inning and allowed five runs. Pivetta is obviously unavailable. Lefthander Martín Pérez and righty Garrett Richard can give him length, but neither are encouraging options.

If the Rays win tonight, it’ll probably be Sale starting against McClanahan in Wednesday’s Game 5. Then again, as we saw last night, all plans are tentative, especially when it comes to extra innings in the postseason.

“It was a long, weird evening of baseball under blackout conditions. (Fans at Guaranteed Rate Field donned all black.)”

That’s how Tom Verducci sums up last night’s other chaotic ALDS Game 3. The White Sox entered the game trailing 2–0 in the series. Their win over the Astros produced a bunch of historical oddities that indicate how this series could turn around.

Want to know more about the wild ALDS Game 3 between the Red Sox and Rays? Need an explanation about that automatic double in the 13th? We’ve got you covered:

The defending American League champions are on the brink of elimination after a wacky 13th inning sent them to their second straight loss against the Red Sox.

Need a quick primer on where things stand in the NLDS between the Giants and Dodgers tonight’s Game 3? Let’s get you caught up:

This Is What the Giants Do by Stephanie Apstein

They dispatched the Dodgers 4–0 in Game 1 of the NLDS the same way they won 107 games. It's not surprising. It's what they've done all year.

3. WORTH NOTING from Tom Verducci

Just how healthy is White Sox ALDS Game 4 starter Carlos Rodón? Nobody really knows. He has thrown only five innings in the past 20 days, and while doing so, his 96-mph fastball was puttering along at 91. His shoulder has been barking for weeks. Manager Tony La Russa said he decided to start him because Rodón reported last Tuesday that his shoulder was less achy than it had been. If Rodón throws the way he did in his last start, he won’t be long for the game. But if postseason adrenalin and the rest do him well, Rodón could give Chicago more innings than did Game 3 starter Dylan Cease (1 2/3).

Monday was supposed to mark our second four-pack of playoff games after Chicago’s victory Sunday night ensured there won’t be any sweeps in the divisional round. But, Game 4 of that series was rained out and postponed until tomorrow.

So instead, we’ll have an exciting three-game slate. Atlanta hosts Milwaukee (1:07 p.m. ET on TBS), with both teams trying to seize control in Game 3. The Rays and Red Sox once again occupy the primetime slot (7:07 p.m. ET on FS1) as Boston aims to knock out the defending AL champions in Game 4. Then, the heavyweight matchup between the Dodgers and Giants (9:37 p.m. ET on TBS) continues with Game 3 in Los Angeles.

The Dodgers-Giants game features Max Scherzer on the bump for L.A. against San Francisco’s Alex Wood. Other than Mad Max snarling his way through another October start, the most exciting part of this game is that 41-year-old Albert Pujols is getting his first playoff start since 2014. Dodgers manager Dave Roberts said Pujols will be in the lineup against the lefty Wood. Pujols is nowhere near the player he once was, but he still crushes southpaws. In 146 plate appearances this year vs. lefties, he had a .294/.336/.603 slash line with 13 home runs.

The Rays—the best team in the American League—now face a do-or-die game in which their pitching staff has been largely wiped. Last night’s 13-inning marathon saw them use nine pitchers, including the previously scheduled starter for today, Luis Patiño. That leaves them with a bullpen game with the role of opener played by Collin McHugh. (As for the availability of everyone else? “We’ll find a way to piece it together,” said manager Kevin Cash, noting that everyone who threw fewer than two innings on Sunday should be good to bounce back for Monday.) It’s far from an ideal situation. But if there’s any team who can make it work, it’s the Rays, who have thrived with unstructured bullpen roles all year and came out with the best ‘pen in the AL.