What caused the ‘rain bomb’? How the unprecedented Queensland and NSW 2022 floods unfolded

It was a wall of water. A record-breaking and relentless deluge that lasted days and flooded towns and cities along Queensland’s south-east coast, submerging thousands of homes and leaving at least nine people dead.

As the water spreads to northern New South Wales, how did the so-called “rain bomb” develop? And why has Queensland’s capital flooded again just 11 years after the devastation of 2011?

The Bureau of Meteorology warns that an area of low pressure over the south coast of Queensland is dragging in moisture from the Coral Sea to the north and then lifting it over the coastline. There has been torrential rain for two days and there is much more to come.

At Gympie, 200km north of Brisbane, a flood warning is issued for the Mary River. Some areas that flow into the river have had 300mm of rain in just six hours.

Ben Domensino, a meteorologist at Weatherzone, says the low pressure trough is delivering the rainfall but an area of colder air higher in the atmosphere is drifting in, making the atmosphere unstable and allowing moisture to be lifted up and dropped as rain.

As the trough is expected to move slightly east, computer models show that by Friday there is “a bit of a bullseye over Brisbane”, a BoM forecaster says.

Towards New Zealand, Domensino says, an area of high pressure – known as a blocking high – stops the system from moving away into the Tasman Sea.

Large areas of south-east Queensland are placed under a warning for intense rainfall and thunderstorms that will cause flooding.

Somerset Dam, that can feed Wivenhoe, also starts to rapidly fill, going from 80% to 148% in one day.

Business owners in central Gympie scramble to get stock out of their stores and residents prepare to evacuate. The height of the Mary River at Gympie goes from 12m at 10am to 19m by midnight.

The area of cooler air in the upper atmosphere drifts into the low pressure trough and starts to deliver record-breaking downpours over Brisbane and its surrounds.

At 10pm, Seqwater starts to release some of the water building up in Wivenhoe Dam.

In Gympie, the town’s central business district is inundated. Torrential rain hovers over the Brisbane region, feeding Wivenhoe Dam but also filling major rivers like the Bremer that winds through Ipswich and the Lockyer Creek.

Both those waterways flow freely into the Brisbane River below Wivenhoe, which is filling at an incredible rate.

Prof Stuart Khan, an expert on water management at the University of New South Wales, says Wivenhoe gained about 1,450 billion litres of water, “which all came in under three days”. That is about three Sydney Harbours’ worth of water.

Compared with the floods of 2011, Khan says this is about 50% more water into the dam in about half of the time.

“Wivenhoe has never dealt with that volume of water but it was lucky it was down at 60% at the start. If we had started where we started from in 2011 we would be in serious trouble.”

As the rain falls, the Brisbane River hits moderate flood levels. There is already local flooding from the intense and incessant rain that is interspersed with violent thunderstorms.

Brisbane wakes up to major flooding. The Queensland capital’s mayor, Adrian Schrinner, says there is a “rain bomb” over the city. Prime inner-city areas including much of the South Bank precinct are underwater.

There are scenes of devastation in low-lying suburbs, along creeks, and in the river itself where pontoons break free and ferry terminals are littered with smashed boats and debris.

A high tide on Sunday evening pushes the river higher as the rising ocean water effectively holds back the freshwater.

The river peaks overnight at the major flood level of 3.5m, falls slightly after the high tide, and goes higher to eventually peak on Monday at 3.85m – below the 2011 peak of 4.46m.

“Nobody has ever seen this amount of rain in such a short period of time over our south-east catchment,” says the Queensland premier, Annastacia Palaszczuk.

There are up to 15,000 homes flooded in the city, with 1,544 people in evacuation centres in the south-east. Trains are cancelled, bus services limited, the main Bruce Highway is closed at multiple locations and 51,000 people are without power. At least 3,600 homes are flooded in Gympie.

But Khan says the Brisbane flooding could easily have been much worse.

“There was a high degree of luck in terms of where we started from [with Wivenhoe Dam],” he says, adding that the climate crisis will only raise the risk of future events.

“This shows us the risk is real – to have two serious flood events in just 11 years is a pretty high frequency for a major city like Brisbane to have to deal with.”

Brisbane has two features that make it susceptible to flooding. A subtropical climate naturally suited to big rain events and a city and suburbs built beside rivers and creeks in front of mountain ranges.

“We build our cities on rivers for a reason – it was good for transport and waste disposal – but that also means we built on flood plains,” Khan says.

As well as the rising river levels, the amount of rain falling locally causes flash floods all across the city and its outer suburbs as creeks swell, inundating areas that escaped the 2011 floods.

According to Domensino, some 611.6mm of rain fell on the city between 9am Friday and 6pm Sunday – the highest three-day total in records dating back to 1840. The previous record was 600.4mm in 1974.

Domensino says while several features in the atmosphere combined to deliver the rain, climate change likely made the event worse.

“Given climate change is a background to all weather events, it’s hard to say that it does not play a role,” he says. “We know the oceans are getting warmer and that puts more moisture in the atmosphere, and a warmer atmosphere can hold more moisture.”

The BoM has said heavy rainfall events will get more intense as the world gets hotter.

Prof Bofu Yu, of Griffith University’s Australian Rivers Institute, says in 2011 rainfall was concentrated in the west and not as widespread as the current flooding.

“As a result, flooding this time has been much more extensive from small creeks and large rivers,” he says.

As Brisbane starts a long and costly clean-up, hundreds of cars are stuck on the main M1 highway to the south.

There is devastation in northern NSW as Wilsons River rises two metres above previous flood records, inundating the town of Lismore. On Tuesday morning evacuation orders are issued for South Ballina. 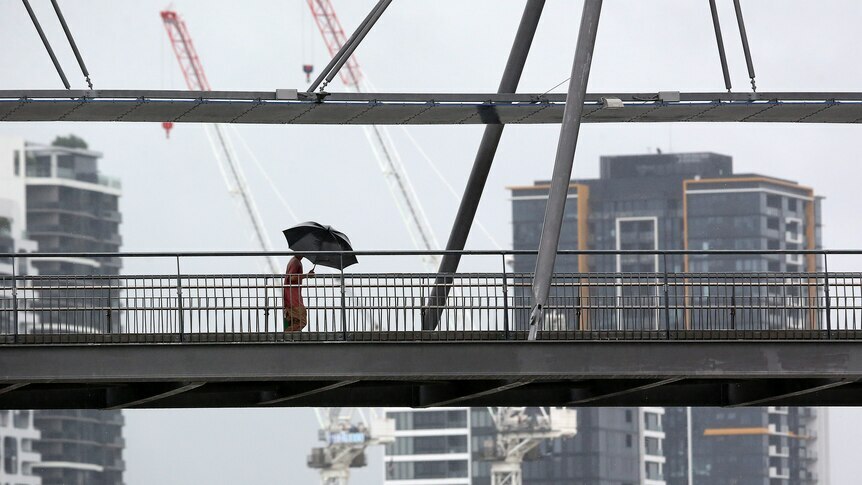 The Guardian - AU
Brisbane flood: warning up to 15,000 properties could be inundated as river reaches peak

The Guardian - AU
Floods in Queensland and NSW: what we know about areas affected, and what’s likely to happen next

Eight people have died, more are missing and hundreds have been rescued as flooding hits Brisbane, Lismore, Murwillumbah and Grafton

ABC News
One subscription that gives you access to news from hundreds of sites
Man missing, many stranded in Qld floods

A man has been missing for almost four days in the southeast Queensland floods, which have killed nine people and…