How the farmer protest in Karnal ended 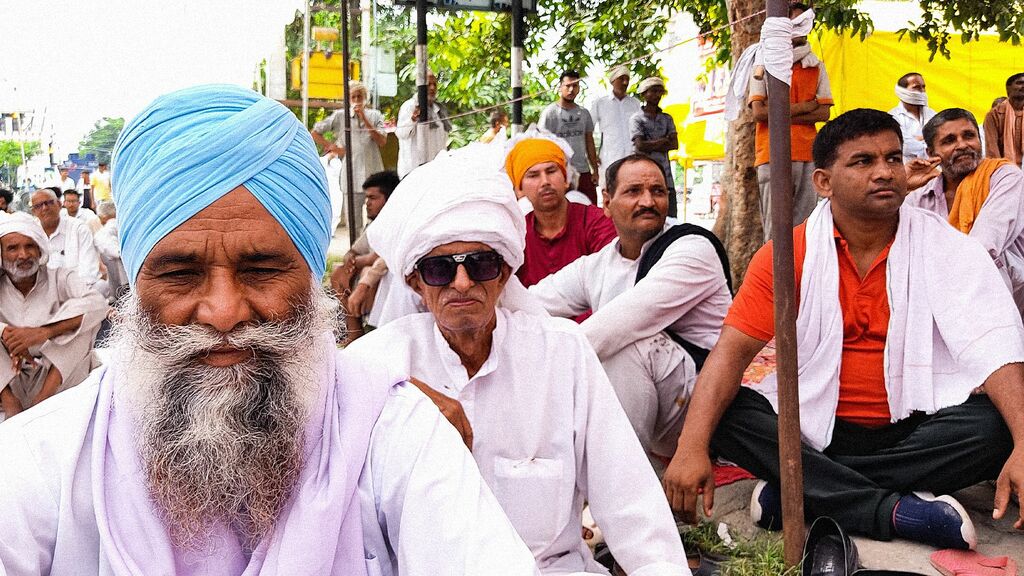 At 9.30 am on September 10, police and paramilitary men were barricading the road leading to the Mini Secretariat in Haryana’s Karnal.

“There should be a smile on your face,” one Rapid Action Force officer told his men as they shut off the road, which protesting farmers planned to march on later in the day.

It was the fourth day of the protests, triggered by the police’s August 28 attack on farmers at the Bastara toll plaza in Karnal.

The farmers have been demanding compensation for the family of Sushil Kajal, a farmer who died from injuries sustained in the attack, action against the police officers responsible for it, and suspension of Karnal’s former sub divisional magistrate Ayush Sinha.

In a viral video from August 28, Sinha is heard directing a group of policemen to “smash the heads of farmers in case they try to breach the cordon” around the Bastara toll plaza where farmers have been protesting against the Narendra Modi government’s new farm laws since last November. The cordon was put in place to keep the farmers from entering Karnal city where chief minister Manohar Lal Khattar was set to address a meeting. When the farmers tried to push through it, they were lathicharged by the police and at least 10 were injured, including Sushil Kajal.

Following public outrage over the police brutality, the Khattar government transferred Sinha out to Chandigarh, positing him as an additional secretary in the Citizen Resource Information Department. But it wouldn’t accept the other demands of the farmers.

On September 11, however, the government ordered a judicial inquiry into the August 28 attack and sent Sinha on leave for a month, ending the four-day standoff with the farmers.

At the protest camp across from the police barricades, Gurjant Singh Khalsa, 29, a social activist from Karnal, was the centre of attention, with the farmers crowding him for selfies. He was one of the people injured on August 28 and still carries the scars: his right eye is covered by a handkerchief, his nose by a bandage. He has lost about 60 percent vision in his eye and a bone in his nose is displaced and needs corrective surgery.

“We wanted to show black flags to the chief minister at the Prem Plaza hotel that day. There were about 250 of us. The policemen came and after telling us not to proceed started raining hurling lathis on us,” Gurjant said. “They could have tried dissuading us by throwing teargas shells or using water cannons. But what they did reminded us of Jallianwala Bagh. It seemed as if General Dyer was inside those policemen.”

A picture from the attack which went viral on social media showed a man covered in blood from a head injury. He was Mahindra Singh Poonia, who had been serving food at the Bastara protest camp for nine months.

“Five policemen were thrashing my younger brother with lathis. I got hurt trying to protect him. He got twelve stitches, I received nine,” Mahindra said, his head still bandaged.

Another protester, also named Gurjant Singh, fractured his hand in the attack. “Just like we hadn't allowed Khattar’s helicopter to land in Kaimla village, we simply wanted to stall his meeting,” he said. “When I saw policemen from my Sikh community beating up elderly farmers, I went to them with folded hands, ‘Brother, what are you doing?’ They attacked me as well.”

His medicolegal report from Karnal’s Civil Hospital states the “gist of incident” as “beaten by police at Bastara toll plaza”. It lists six injuries, including a lacerated wound in right arm and contusions in left arm, left leg and back.

Sudesh, 45, widow of Sushil Kajal, was also among the protesters near Mini Secretariat on September 11. A relative accompanying her told Newslaundry that Sushil’s “entire body was swollen and bruised from the lathicharge. He was in great pain because of a blow on his head.”

The family couldn’t take Sushil to a hospital as the police had blocked the entire city. “We thought we would let him rest at home,” Sudesh said. “All I want now is for the government to take back these black laws.”

Prepared for the long haul

Until the Khattar government actually accepted their demands in the afternoon, the farmers seemed to have dim hopes of the standoff being resolved.

One of the leaders of the protest, Bhartiya Kisan Union’s Gurnam Singh Chaduni, tweeted on September 10 about “enduring pain in order to shake up the inner soul.” Later, talking to the local media, Chaduni had said, “All of us are ready with our heads”, indicating that the farmers weren’t ready to give in.

Indeed, they had started preparations to stay for the long haul, planning mini townships in Karnal like the ones that sprang up along Delhi’s Singhu and Tikri borders after the farmers began their protests late last year. Already, stalls set up by the Sikh Gurudwara Prabandhak Committee had started distributing meals, crates of bottled water had been stacked up near the main stage of the protest camp, and counters distributing free medicine had been erected near the secretariat to ensure heat and humidity didn't take a toll on the protesters.

A worker with Pind California, a volunteer organization, told Newslaundry they had already got iron rods needed to erect stable tents.

The preparations, it turned out, weren’t needed.

Addressing a press conference after meeting with the Khattar government’s representatives, Chaduni announced the end of the standoff. “On the issue of suspending Ayush Sinha and filing an FIR against him, we had consulted lawyers who suggested an FIR may get quashed in court. So we agreed with the decision of judicial inquiry.”

Chaduni was flanked by Haryana’s additional chief secretary, Devinder Singh, who told the journalists that both sides had agreed on an inquiry led by a retired judge and a government job for a family member of Sushil Kajal.

So it was over, the protest sparked by the August 28 police assault on the farmers. The protests against the farm laws, however, continue.

“The protest in Karnal and the protests along the Delhi border were different,” farmer leader Abhimanyu Kohar explained. "While the protest in Haryana was about a local issue, our protests since November have been about a pro-corporate policy."