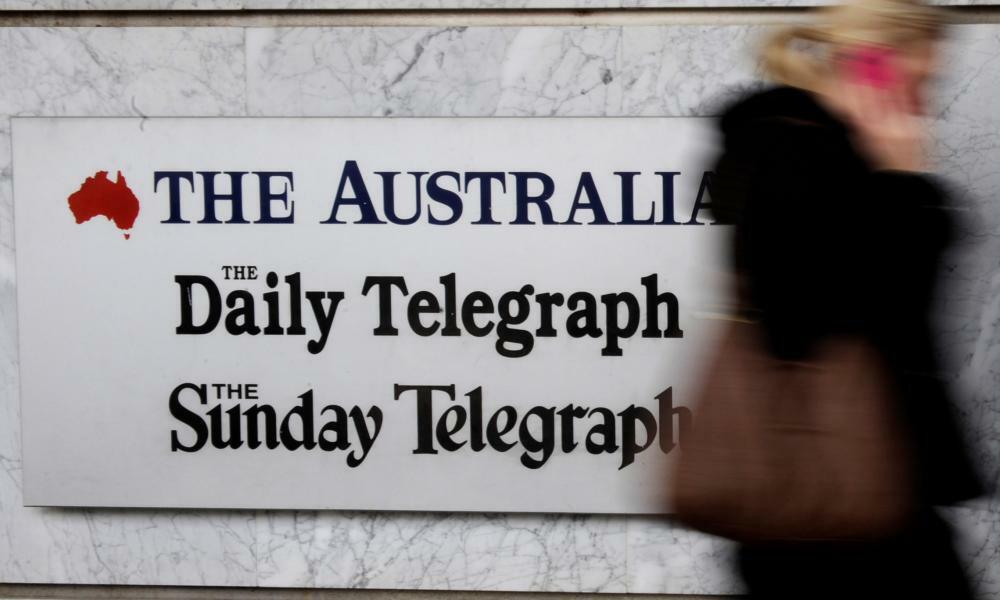 The Australian newspaper often gleefully reports the work of the rightwing thinktank the Institute of Public Affairs in an effort to undermine the ABC.

Like the IPA, Rupert Murdoch is in favour of privatising the public broadcaster, and chipping away at Aunty is daily fodder for his newspapers. But this week the Australian’s media writer and ABC-specialist Sophie Elsworth’s report of the IPA’s latest claims about the public broadcaster went horribly wrong.

Elsworth reported that the public broadcaster had mentioned “News Corp” or “Murdoch” more than 56 times a day or 1,700 times in 30 days, based on media monitoring data analysed by the IPA.

The story came after we reported News Corp had published 45 articles in two days that criticised Four Corners for its Fox News exposé.

“Murdoch derangement syndrome is very infectious at the ABC, which is acceptable at a private media company like the Guardian but completely inappropriate at a taxpayer-funded broadcaster which is meant to be impartial,” he said.

“ABC staff who claim a News Corp pile on against the ABC ought to look in the mirror.”

But sharp-eyed ABC journalist Jamie Travers smelt a rat and asked the IPA for the raw data.

The number of times the ABC mentioned Murdoch was massively overstated, as an ABC News statement later explained: “For example, one night it seems a listener called Peter rang into national late-night radio show Nightlife and referenced a report in ‘the Murdoch paper today’. Because Nightlife is heard across Australia, The Australian and the IPA counted Peter’s comment as being more than 50 separate mentions.”

The mentions included erroneous items such as the chef Lauren Murdoch, who was counted 17 times, as well as the non-media mogul Murdochs – Lindsay Murdoch, Peter Murdoch, Brent Murdoch, Roger Murdoch and Jordan Murdoch.

One mention of the News Corp share price in stock market reports garnered 13 separate mentions, and Murdoch University and the Murdoch Children’s Research Institute were all dragged in.

Mentions of News Corp journalists whose work was being quoted was included as were stories in News Corp papers and wraps of the morning media.

“In fact The Australian has even included traffic reports as multiple instances of the ABC ‘discussing Murdoch’,” the ABC said. “The Australian’s story is false, misleading and frankly ridiculous. The ABC has sought a correction from The Australian.

“And drivers should be careful of traffic conditions in Murdoch St, Cremorne, and Murdoch Road, South Morang.”

We have asked editor-in-chief Christopher Dore and Elsworth for comment. The ABC has asked for a correction but the original story is still online.

The threat of free news

A key reason the Murdoch empire is increasingly focused on the ABC is its expanding footprint in digital news.

ABC News has been Australia’s top digital news brand since January 2020, when it overtook news.com.au in terms of overall monthly unique audience.

At the same time News Corp has transitioned to a primarily digital news business: it has 117 mastheads in total but only 15 of those are in print. The ABC’s free news service is a barrier to its subscription business.

With ABC News the No 1 Australian news brand on Apple News (3.6m monthly audience), Instagram (700,000 followers) and No 2 on Facebook (4.5m page followers) competition is intense. In June this year 12.8m Australians, or 51% of people aged 2+, used either the ABC website or the app to access ABC news.

As advertising revenue continues to shrink the importance of subscription revenue to News Corp grows.

The executive chairman of News Corp Australasia, Michael Miller, has revealed the company supports vaccination and has recruited a supplier to vaccinate its staff, many of whom as journalists and printers are classified as frontline workers.

Murdoch’s Australian chief said he would have concerns about sending an unvaccinated staffer to cover an event and a decision had yet to be made on whether to mandate vaccination for everyone or change people’s roles if they didn’t get vaccinated.

He also revealed a little about how he sees the media landscape. Miller said some media, namely Crikey, had positioned themselves as “counter to News Corp”, while others, namely the ABC, Guardian Australia and parts of Nine Entertainment, are offering a “counter view” to News Corp and are “fighting over that market”.

Discussing the ongoing spats between media outlets, he also said something Sophie Elsworth and her editors may want to think about.

Since BuzzFeed Australia folded last year, its founding editor, Simon Crerar, has spent a great deal of time thinking about news funding models. Crerar has launched a philanthropic news start-up with Karen Mahlab, the founder of Pro Bono Australia, Rob Wise, the MD of Be Collective, and journalist and academic Margaret Simons.

“I think at the local level what we’ve seen internationally is that in the USA more than two thousand newspapers closed over the last decade,” Crerar told the Walkley magazine. “Newspaper advertising revenue is 50% down in the UK. There are 47% fewer reporters working in Australia than there were in 2010. Prior to the pandemic, around 100 local papers closed in Australia and since the emergence of the coronavirus more than 200 have closed. It’s a crisis.”

Crerar says the most critical issue from a journalism perspective is local news and is set to reveal more details about start-up *PS Media at a live virtual event on Wednesday.

One of the most experienced ABC journalists, former foreign correspondent Lisa Millar, has had to deactivate her Twitter account after she became a target for abuse.

Currently co-host of ABC News Breakfast with Michael Rowland, Millar told Beast the sustained bullying campaign had forced her off the platform.

Ironically the crisis for Millar came at the same time as ABC News Mornings host Joe O’Brien revealed he had received a letter from an 85-year-old great-grandmother who appreciated his company during lockdown so much it made her feel she wasn’t alone.

O’Brien was so delighted she had taken the time to write to him he called her for an off-air chat.

Five years ago then-ABC correspondent Liam Cochrane was working with the ABC’s long-term Myanmar fixer Han Thar – “a super smart, charming man” – on an assignment about the opium trade.

Cochrane told Beast it was an amazing shoot “including a two-night traffic jam, addicts shooting up in a graveyard, getting drone shots over poppy fields and many other adventures” and the two became firm friends.

“The ABC simply could not have told this story without Han Thar,” he said.

In February, shortly after Thar worked alongside ABC correspondent Mazoe Ford covering the military coup, he was arrested, tortured for two weeks and imprisoned. He is currently recovering from Covid which spread through Insein prison. The imprisonment of Thar and his media colleague, who has been released because he is an American citizen, was covered by Australian CNN journalist Anna Coren.

Cochrane is now working with the Alliance for Journalists’ Freedom on a campaign #FreedomForHanThar pushing for his release – he has now been locked up for six months – and is calling on the Australian government and the ABC to do what it can to support him.

“The ABC continues to support the efforts on behalf of Han Thar and has offered assistance to the campaign,” an ABC News spokesperson told Beast. “We reported on his story in April and remain in touch with his family.”