The Centers for Disease Control and Prevention released a report on Nov. 13 that describes a list of microorganisms that have become resistant to antibiotics and pose a serious threat to public health. Each year these so-called superbugs cause more than 2.8 million infections in the U.S. and kill more than 35,000 people.

The CDC listed 18 species of bacteria and fungi that are of greatest concern. The fear is that these superbugs could spread resistance to other disease-causing organisms, rendering modern medicines’ most powerful weapons useless.

At the same time, many scholars across the United States are addressing the problem and coming up with innovative solutions to fight these microscopic threats. Here we spotlight four examples from our 2018-2019 archives.

1. Consistent rules for hospitals with superbugs

Infectious disease physician-scientist David Pride explains why incremental improvements of current antibiotics are not effective, and how the rules for containing antibiotic resistant bacteria differ from hospital to hospital exacerbating the spread of these deadly microbes. He presents an ambitious plan for curbing the rise of superbugs. That includes adopting common protocols across hospitals for when, and which, antibiotics are prescribed to stop inappropriate and over use. He also underscores the need to administer fewer antibiotics in livestock.

2. Viruses to the rescue

It is well known that the enemy of your enemy is your friend. Andrew Camilli and Minmin Yen write about how they and other researchers are exploiting this idea to enlist bacteria-killing viruses, called bacteriophages, to wipe out superbugs that are resistant to antibiotics. These researchers are focusing on using bacteriophages to kill off the cholera bacterium in the gut to prevent infection. But these viral cocktails are also proving effective against other infections.

One problem with current antibiotics is that they don’t discriminate between the disease causing microbes and the beneficial ones that make up our microbiome and are essential to good health. David B. Stewart and Arun K. Sharma describe how they are designing nanotechnology to carry inexpensive targeted drugs that only kill Clostridioides difficile, a microbe that the CDC has classified in this new report as an urgent threat.

You might be under the impression that all of the microbes on the CDC’s list of public health threats are bacteria. But three – 20% of those mentioned in the report – are fungi. The most worrisome new foe is called Candida auris. With limited drugs to fight fungal infections, Carol A. Kumamoto and Jesus A. Romo write about how they are studying a less dangerous fungal relative, C. albicans to identify the vulnerabilities of this treacherous fungus.

Editor’s note: This story is a roundup of articles from The Conversation’s archives. 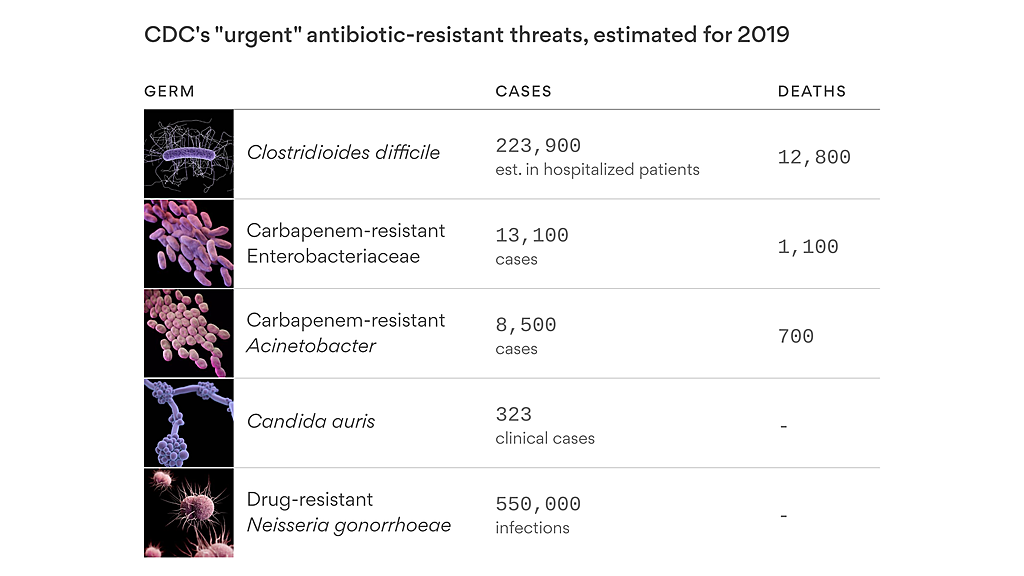 CDC ups estimates: 2.8 million Americans become ill from superbugs annually
But, death rates from these infections appear to be dropping.

Axios
From analysis to the latest developments in health, read the most diverse news in one place.
Antibiotic-resistant infections killing twice as many Americans as once thought

Reuters
'Superbugs' on the rise, new CDC report says
Six years after a federal government warning that lifesaving antibiotics were losing their punch, a new update Wednesday revealed that…

The Philadelphia Inquirer
Kombucha, kimchi and yogurt: how fermented foods could be harmful to your health

Fermented foods have become very popular, thanks to claims about their nutritional properties and reported health benefits, such as improving…

Forbes
One place to find news on any topic, from hundreds of sites.
Pakistan deploys new vaccine against 'superbug' typhoid outbreak
(Reuters) - Pakistan began vaccinating millions of children against typhoid on Friday to try to control a drug-resistant superbug outbreak…