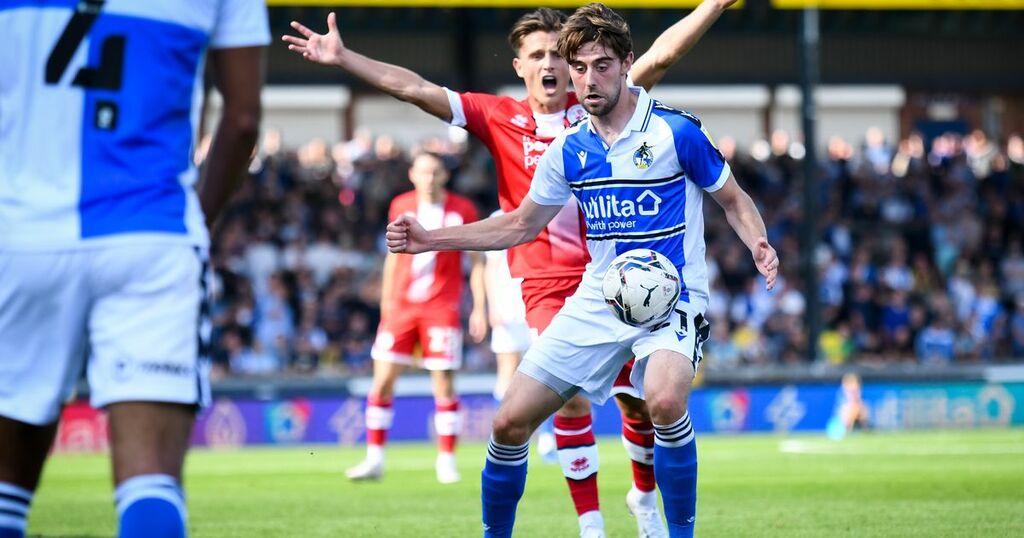 The path from Paderborn to Bristol isn’t particularly well-trodden but in the space of just a week Antony Evans has made himself feel very familiar to Gasheads having signed on a free transfer on deadline day.

An assist on debut, picking out Leon Clarke with a whip-smart cross on the run, was the highlight of an opening performance that fizzled with guile and endeavour, as Evans made his first professional appearance since May 1 – also, curiously, at the Mem but in the colours of Crewe.

Twenty four hours before the game against Crawley Town, Joey Barton had played down the potential of his late August arrivals being involved but Evans had enjoyed pre-season in Germany and although his energy levels wavered around the hour mark, he won’t be far off being able to complete 90 minutes.

There is something of the good luck about how Evans has landed in Rovers’ lap, albeit a set of circumstances born out of the midfielder’s own misfortune at Paderborn.

Signed by the then-Bundesliga club in January 2020 having struck a glass ceiling at Everton of Under-23s football crossed with League One loans, it was a major decision for Evans to make having been at Goodison Park since he was nine and based in Liverpool all his life.

"Everton’s all I’ve ever known. But I wanted a new challenge to come to Paderborn and develop even more," he said at the time, as the Bundesliga's own website made lofty comparisons to Marco Reus in terms of playing style.

It represented a fresh start, in a league and country that appreciated technical football but also with a sense of structure and professionalism with a proven record of giving young talent a platform to impress.

Evans said he initially settled well in the city. He speaks of enjoying the “discipline” of German football and experiencing a different way of life after being born and raised in the north-west. But, like so many players who experienced change in their career in 2020, the pandemic quickly took a detrimental hold.

Stuck in his city apartment on his own for four months, unable to return home to his family in Liverpool, the unfamiliarity of his new surroundings grew increasingly more pronounced and alien.

“Unsettling", is how Evans describes the strange scenario of watching the world change miles from anyone who he knew with any great substance and longevity.

He did earn his debut in the Bundesliga as the 2019/20 season resumed behind closed doors, making six appearances (with two starts) as Paderborn were comfortably relegated to Bundesliga II.

Having to adapt in a new city and country is hard enough but in a global pandemic at a club where failure can't have created the most welcoming of dressing room atmospheres, as players fretted over their futures, only heightened the challenge. Although Evans insists with genuine conviction that for all the struggle it was a good experience.

“I thought it was the right time for me to go over and mature as a man, living on my own so I went for it and it was a good experience, it really was,” Evans said. “I played six games in the Bundesliga which is one of the biggest leagues in the world, just a great experience.

“At Everton I was mainly with the 23s so, not kids football, but it’s mostly younger lads. Going over to Germany it was straight into the mix of a team that was fighting to stay in the Bundesliga, so the difference was massive.

“I had to learn very quickly and I did, I think. I settled quite well, had an apartment over there but then Covid came and stopped everyone in their tracks and that wasn’t easy. I was stuck over there for four months in my apartment. It wasn’t great but all part of the experience.

“I couldn’t go home, had to do quarantine because I came in contact with one of the lads who caught it and, at that time, everyone was really scared of it. It was unsettling.

“That set everyone back a long time. With the money that the club was losing out on, it put everyone in difficult positions. The club were in a difficult situation, we were going down, we tried to bounce back but we didn’t.”

Unable to win over head coach Lukas Kwasniok who took Evans aside one day to tell him he saw his future as a right-back, a loan move to Crewe enable the midfielder to return home and take stock of his situation and career.

As Crewe fans will testify, Evans’ impact at Gresty Road was mixed but from his own perspective helped drive the decision that a return to England the following summer was the right move, agreeing to a termination of his contract 10 months ahead of schedule and 10 days before signing for Rovers.

Albeit a slightly regrettable decision, as his time in Germany will always have a sizeable “what if Covid hadn’t hit?”. But he’s not alone in questioning that set of circumstances.

With Barton a staunch Evertonian and Evans’ talent well known to him for many years, that Liverpool link and the manager's own persona helped prove instrumental in bringing him to the Mem, as he hopes to be part of a promotion-winning team after what’s been a challenging couple of years.

“With the squad the gaffer has put together I feel like we can steamroll through this league,” Evans added. “It is not going to be easy but we have got the quality in this group to do that. It is a long old season and who knows what will happen but we have got that target of going up and I hope we do that.

“We haven’t had the best start but there are a lot of new faces around the place and it is going to take some time for the lads to gel. Now the transfer window is closed we have got time to do that and hopefully, the fans will stay behind us and we will start winning.”

Evans said that the day before the win over Crawley. Early evidence that maybe his luck is starting to change.