How many ministers has Andrews lost? Eight and counting, and IBAC’s just begun 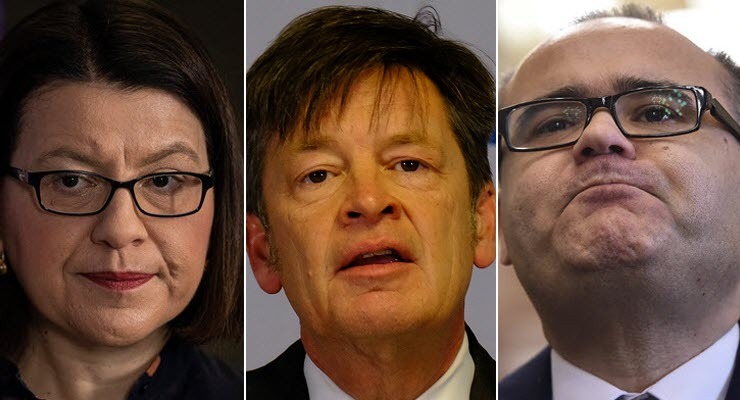 He’s one of the most popular and powerful leaders in the country who has consolidated his power through his handling of the pandemic. Yet Dan Andrews’ grip on Victoria could unravel amid a branch stacking addiction the Labor Party can’t seem to kick.

One minister has already stepped down less than a day into the Independent Broad-based Anti-corruption Commission (IBAC) hearings. At this pace Andrews could have an empty frontbench by the end of next week. The inevitable question is: will another COVID-ridden state lose its premier at the hands of an anti-corruption body?

Whether Andrews stays or goes, he’s likely to lose more ministers on the way. But for now, here’s a list of those who have quit or been dumped. We’re poised to update it over coming weeks.

Donnellan is a name most Victorians probably hadn’t heard of until yesterday when he quit amid a brutal first day of hearings before the IBAC branch stacking inquiry. Federal Labor MP Anthony Byrne was quick to toss Donnellan overboard for allegedly paying Labor Party membership fees on behalf of others.

Victorians will be more familiar with Somyurek’s name after an investigation by The Age and 60 Minutes which revealed the ALP powerbroker was at the centre of a large-scale branch stacking operation. Somyurek was sacked by Andrews the day after the story broke, Andrews saying his actions were “deplorable”. Somyurek had previously resigned from cabinet in 2015.

Somyurek’s sacking was followed quickly by the resignations of his close factional allies and fellow ministers Kairouz and Scott, who were also named in the exposé. Kairouz was accused of forcing staff to engage in branch stacking as part of the Somyurek operation, and Scott allegedly allowed an electorate officer to branch stack while employed in his office. Both deny the claims.

The former health minister quit last year after Andrews told an inquiry she was “accountable” for the state’s botched hotel quarantine scheme that was responsible for Victoria’s deadly second coronavirus wave. Mikakos said it was “disappointing” her integrity had been undermined.

The resignation of Andrews’ close ally kicked off a wave of resignations in 2020, although it was not linked to a scandal. Jennings stepped down in March before branch stacking claims emerged. He was seen as a member of Andrews’ inner circle and one of the most left-leaning members of Parliament. He has since joined the right-wing lobby group Dragoman.

Herbert’s name is one Victorians can forgiven for forgetting. He resigned in 2016 as corrections minister after using a taxpayer-funded driver to chauffeur his two dogs around.

The former emergency services minister quit cabinet in 2016 over a bitter dispute about firefighters’ pay. Garrett refused to back the premier’s revised workplace deal for paid volunteer firefighters.