How Lotus is gearing up for its eagerly-awaited motorsport return

Lotus. It is one of the most iconic names in the world of motorsport. And yet, despite its illustrious history, it has been over a decade since the brand released a new car dedicated to racing. But that long wait is finally over as, earlier this month, the next chapter of Lotus’s story began with the launch of the Emira GT4.

“Lotus should be racing, that’s what Lotus is about,” states managing director Matt Windle, who rejoined Lotus in 2017 having previously worked in its Engineering division. “For me, when I came here, it’s one of the things I really wanted to achieve. I’m a big fan of motorsport and I think it’s where Lotus should be.

“This now brings us into this decade, so we’ve raced every decade, and I think that’s really important. And we will continue to race every decade going forward, as far as I’m concerned.”

Getting Lotus back to where it belongs on the race track is a central plinth of the manufacturer’s Vision80 strategy to transform the business ahead of its 80th anniversary in 2028. And it is certainly a company that is very different to when its last motorsport offering, the Evora GT4, first took to the circuits in 2010.

Most notably, it has a new owner since then, Lotus now falling under the wing of the Chinese Geely Group – which is also responsible for the successful Lynk & Co machines in the World Touring Car Cup. With the fresh ownership has also come a fresh model range, the popular and long-standing Elise, Exige and Evora triumvirate being phased out at the end of last year.

In their place comes the Emira – Lotus’s final hurrah in terms of a mass-produced internal combustion-engined machine – along with a switch to the electric arena with the Evija sportscar and a move into the SUV segment with the high-performance Eletre.

But the changes run deeper than just the cars themselves. There has been major investment in the Hethel headquarters, and in Lotus’s other sites, both in terms of facilities and personnel. An example of this comes in the form of the Lotus Learning Academy, which is training the next generation of engineers and technicians in Norfolk ready for the manufacturer’s expansion.

“We’ve built from the foundations up so this [return to motorsport] is not just a pet project that we’ve put some stickers on a car, we’ve been developing all of the systems, all of the people and the team,” continues Windle.

Another clear sign of this commitment to racing is the formation of the Lotus Advanced Performance division earlier this year, which caters for everything outside of Lotus’s core road cars – which now includes its motorsport activity. But work on the Emira GT4 dates back far further than the creation of the new department.

"Our initial plan was to build 90 cars. It’s starting to feel like that’s not going to be enough, so maybe we’ll build a few more. We’ll see" Simon Lane

Development has been headed up by long-time iSport engineer Richard Selwin, who helped guide Timo Glock to the 2007 GP2 crown, with work on the Emira GT4 first beginning two years ago.

“When we were engineering and designing the Emira, we always had this [motorsport] in mind,” explains Windle, with Selwin estimating that 40% of the parts are carried over from the road car. “We were always thinking about ‘right, that suspension needs to do GT4’, ‘that system needs to do GT4’. It’s not as if it’s just a plug-on that we’ve done at the end, it’s always been there as part of the strategy.”

It is an approach that has paid dividends for several of the leading GT4 cars and one that Lotus hopes will build upon the success of the Evora. That model took eight GT4 wins in a four-year period between 2011 and 2015 in British GT, along with countless other triumphs around the world, before it became too long in the tooth to keep up with the latest GT4 models.

Some elements of the Evora have been retained, such as the transversely mounted 3.5-litre supercharged V6 Toyota engine but, in many ways, the Emira represents a clean slate. And it is a slate that has been crafted by not one but two successful motorsport brands, with renowned tin-top engineering company RML also playing a “very important” part. While Lotus has designed and engineered the different elements, it is RML bringing it all together.

“It’s very much been a partnership – RML build the cars using all the bits that we supplied,” says Lotus Advanced Performance executive director Simon Lane, who previously held a similar position at Aston Martin. “They’ve supported us with testing as well. The car’s been out to Portimao, it’s been to Paul Ricard, and they’ve supported with that.

“The other area they’re really going to help us with is with aftersales support. Right now, we’re not structured to do that and RML are. They have a call centre, they have a really excellent parts support, so they’ll be on hand and present at some of the races as well – at British GT, for example, they’ll be there on hand so we can give proper back-up to people that buy these cars when they race them.”

And in terms of those prospective buyers, there has been plenty of interest from all around the world.

“From across the globe, from as far away as New Zealand, Australia, Middle East, all over the USA, we’ve got a huge amount of demand,” says Lane. “Our importer in Australia is bringing a number of them in to compete in the Targa series so they won’t just be used in GT4, they’ll be doing other things as well.

“Our initial plan was to build 90 cars. It’s starting to feel like that’s not going to be enough, so maybe we’ll build a few more. We’ll see.”

But that significant amount of interest can pose a few problems as well as being positive, particularly with the ongoing global supply chain disruption. The first cars are set to be delivered to customers in the final three months of this year, ahead of a major push in 2023, but Lane cannot be certain of how many Emiras will actually be ready for Q4.

“The challenge we’ve got now is obviously to build them,” admits Lane. “It’s a challenge just because there’s so much uncertainty in the global supply chain and some of our suppliers for this car have been struggling to get parts. For example, there’s a challenge around Xtrac gearboxes at the moment . But we’re very focused on that now and getting the car into build and getting the car into customer’s hands in quarter four.”

Having reached this point, with a race debut potentially just months away, Lotus is on the verge of once again ticking the box that says ‘motorsport’. But this is just the start of the journey.

“What’s cool for us is we’re now talking about, ‘OK, so GT4 is basically done and we’re going to start building and delivering them, now what are we going to do next?’” says Lane.

“We really want to continue that story with motorsport, continue that Vision80 strategy of getting Lotus back into motorsport. I love talking about what we did in the past, we’ve got an incredible motorsport history, we need to start generating some here and now as well.”

Windle adds: “It’s about doing it the right way. So we’ve come back in with GT4, we have plans to develop the motorsport strategy going forward but what we’ll do is get this running first. We wanted to get a product that’s competitive out there, see how we go, build the team back up around the motorsport offering and then move forward from there.”

And, despite the road car range veering towards the world of electric power, that does not necessarily mean Lotus’s motorsport focus will also be heading in that direction.

“We’ve said we won’t do any new high-volume ICE cars but that doesn’t mean we won’t do something else that’s in the motorsport arena so, through Lotus Advanced Performance, there’s some ideas that we’ve already got, at different levels, of where the product will be,” concludes Windle. “There’s a lot to come.”

For Lotus enthusiasts, that sounds just as good as the throaty new Emira. The road-going version has already been seen leading the British GT pack as its new safety car. Now Lotus race cars could soon be back where they belong and also be fighting at the front of grids. 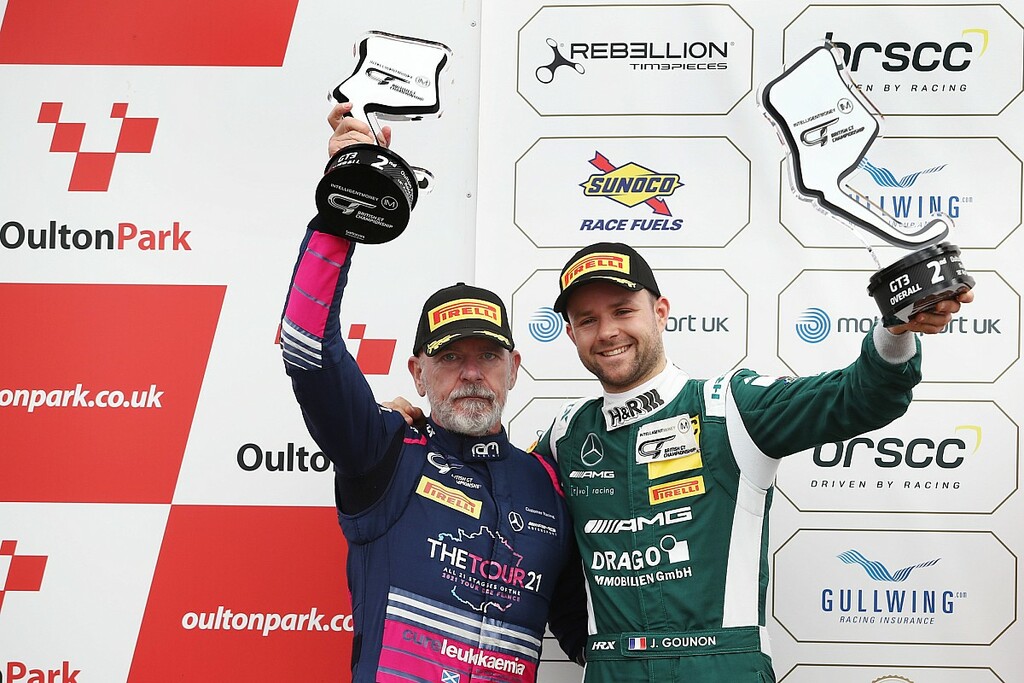 Will Martin and Kiern Jewiss shone through the rain as the Porsche Carrera Cup field battled fiercely at Brands Hatch,…